Official: this is the new Mercedes-AMG SL 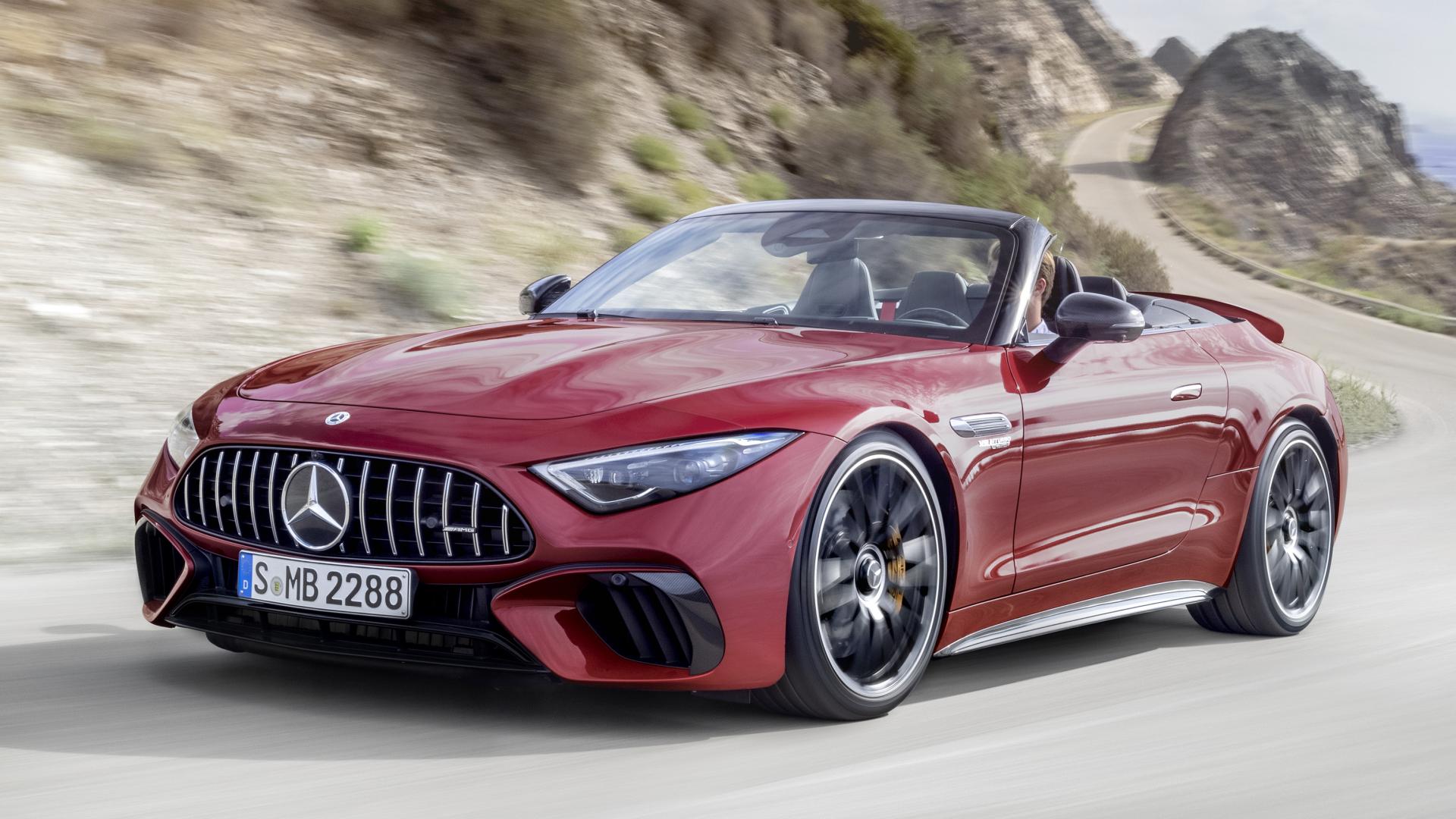 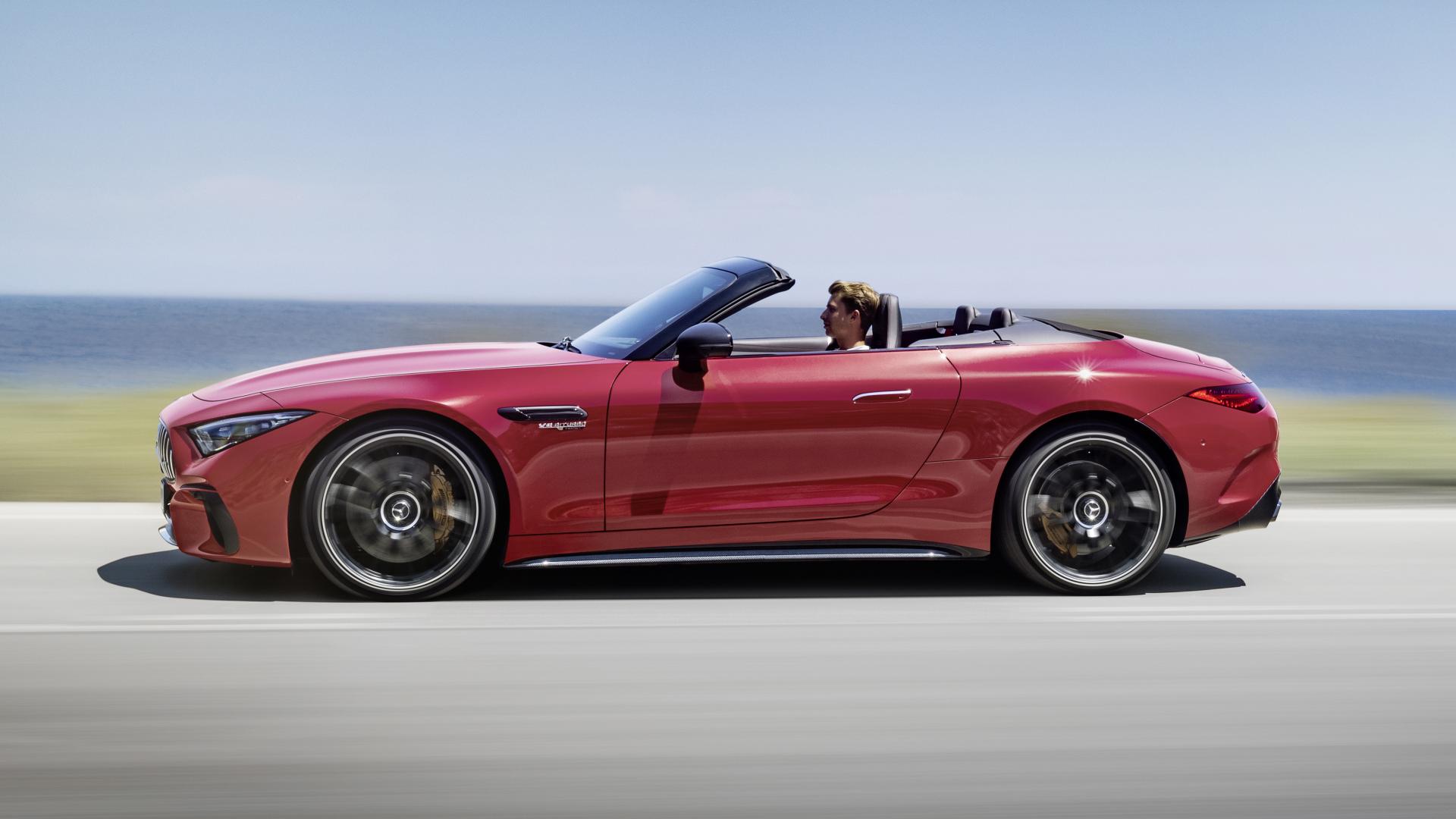 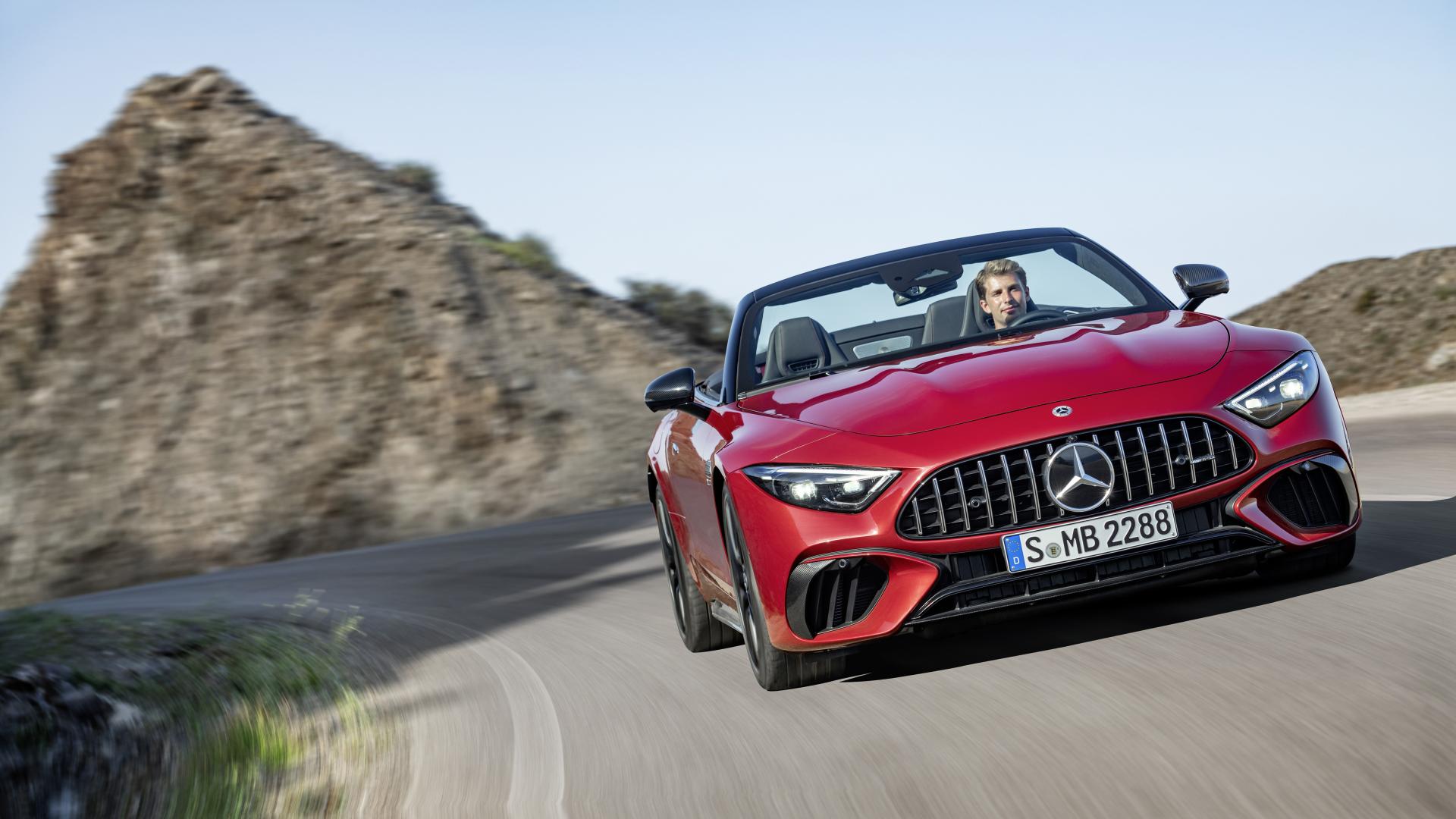 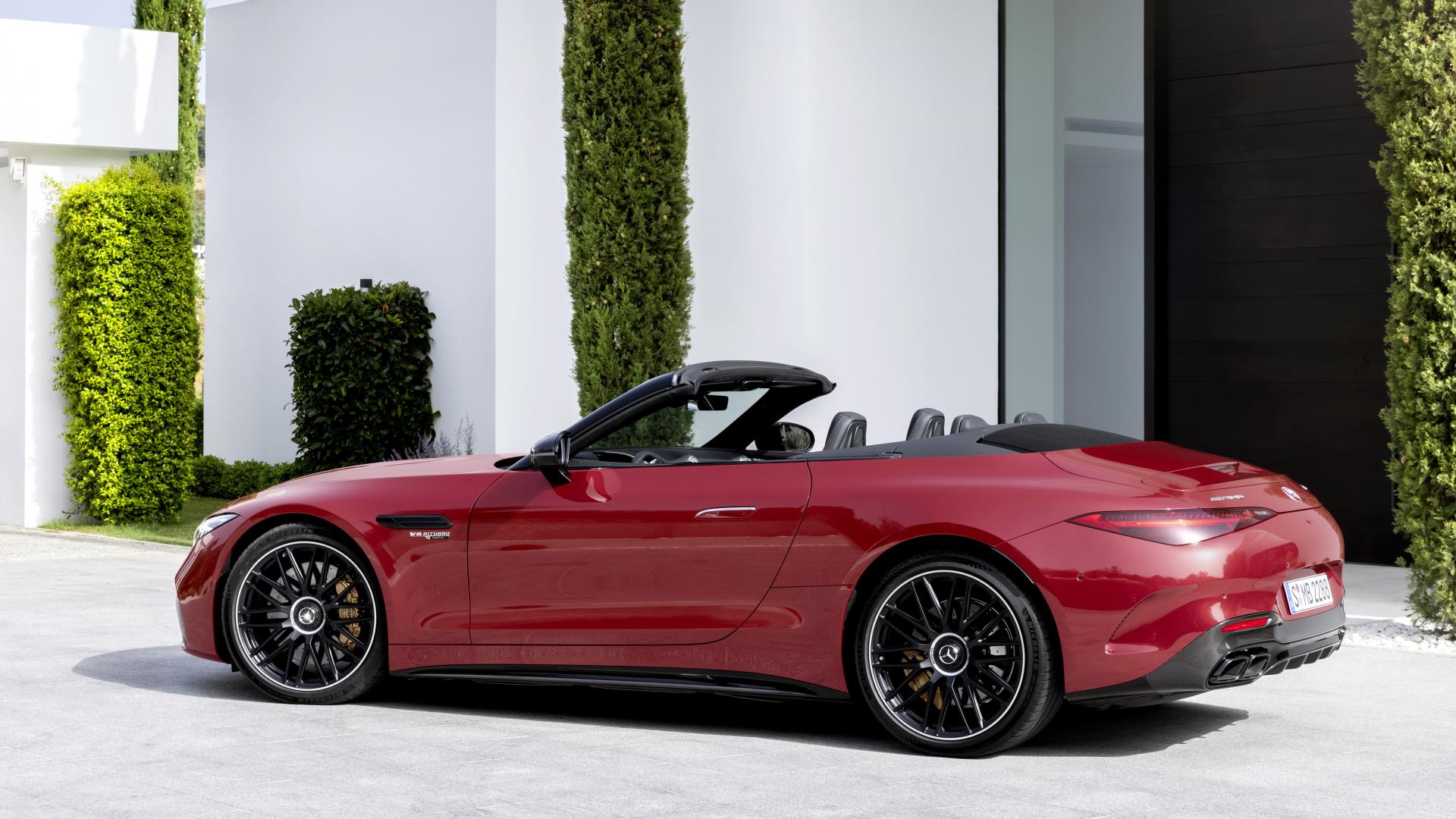 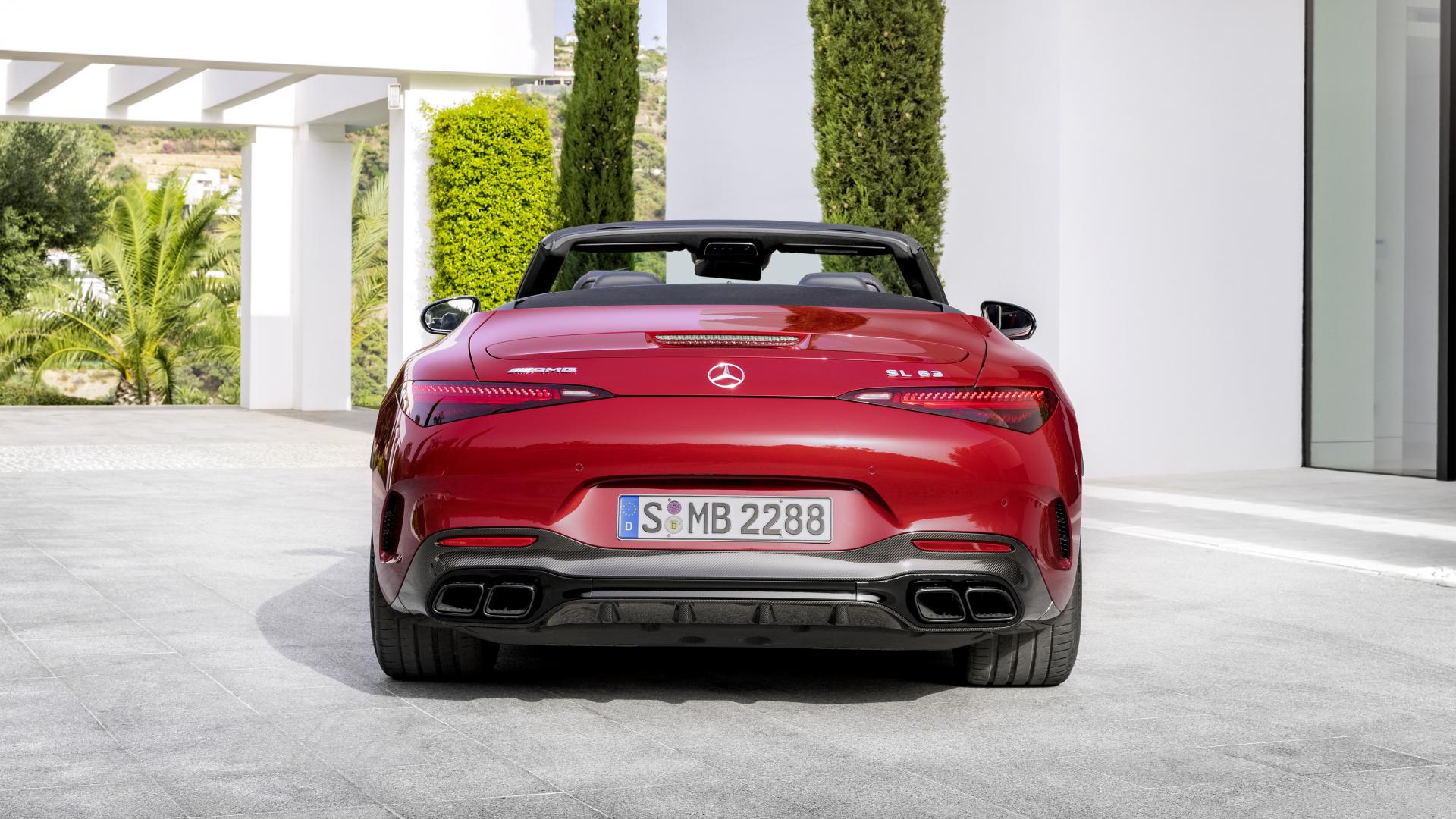 No one’s actually saying it, but Mercedes kind of knows it’s been casually reversing the SL down a cul-de-sac this past 20 years. Even for this storied marque, the SL name-plate – it stands for sporty and light – is one that has genuine emotional heft.

The original arrived in 1952, a competition car whose gullwing doors and spectacular engineering presaged a thrilling road car. The one that followed, the ‘Pagoda’, was the automotive equivalent of the ‘little black dress’, as effortlessly elegant and timeless as any car in history. The Seventies iteration was a pop culture smash hit favoured by Bobby Ewing on Dallas and Richard Gere’s American gigolo, the late Eighties-into-Nineties car a brilliantly blocky slab of modernism.

Since then, well, maybe not so much. Blame that folding hard-top roof and a studied deviation from the ‘lightness’ part of the equation.

So the SL you see here is more than just a seventh generation version of a well-established greatest hit. This is a big re-set. A reboot in which the boot is once again free to be a proper boot. Done under the auspices of AMG, it features an all-new clean-sheet-of-paper chassis that borrows nothing from any existing Mercedes.

As ever, you can judge the design for yourself, but it features short-ish overhangs, slim ‘digital’ headlights, a long bonnet, sharply raked windscreen, and some smoothly reductive surfacing (as is the modern way).

It looks tighter and way punchier than the car it replaces with shades – dare we say it – of Porsche 911 from some angles. (It’s the work of Mercedes’ California design studio, by the way.) 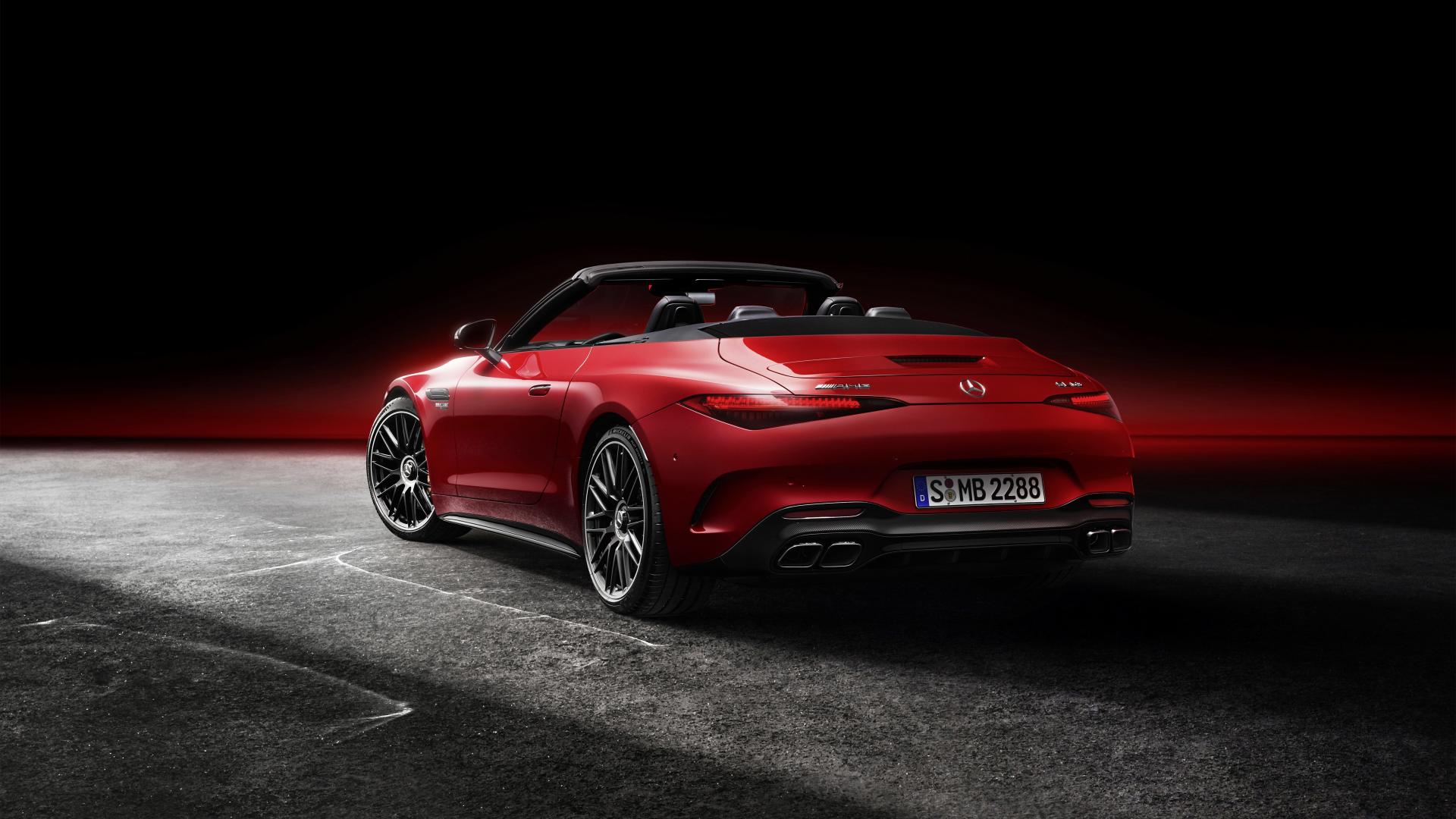 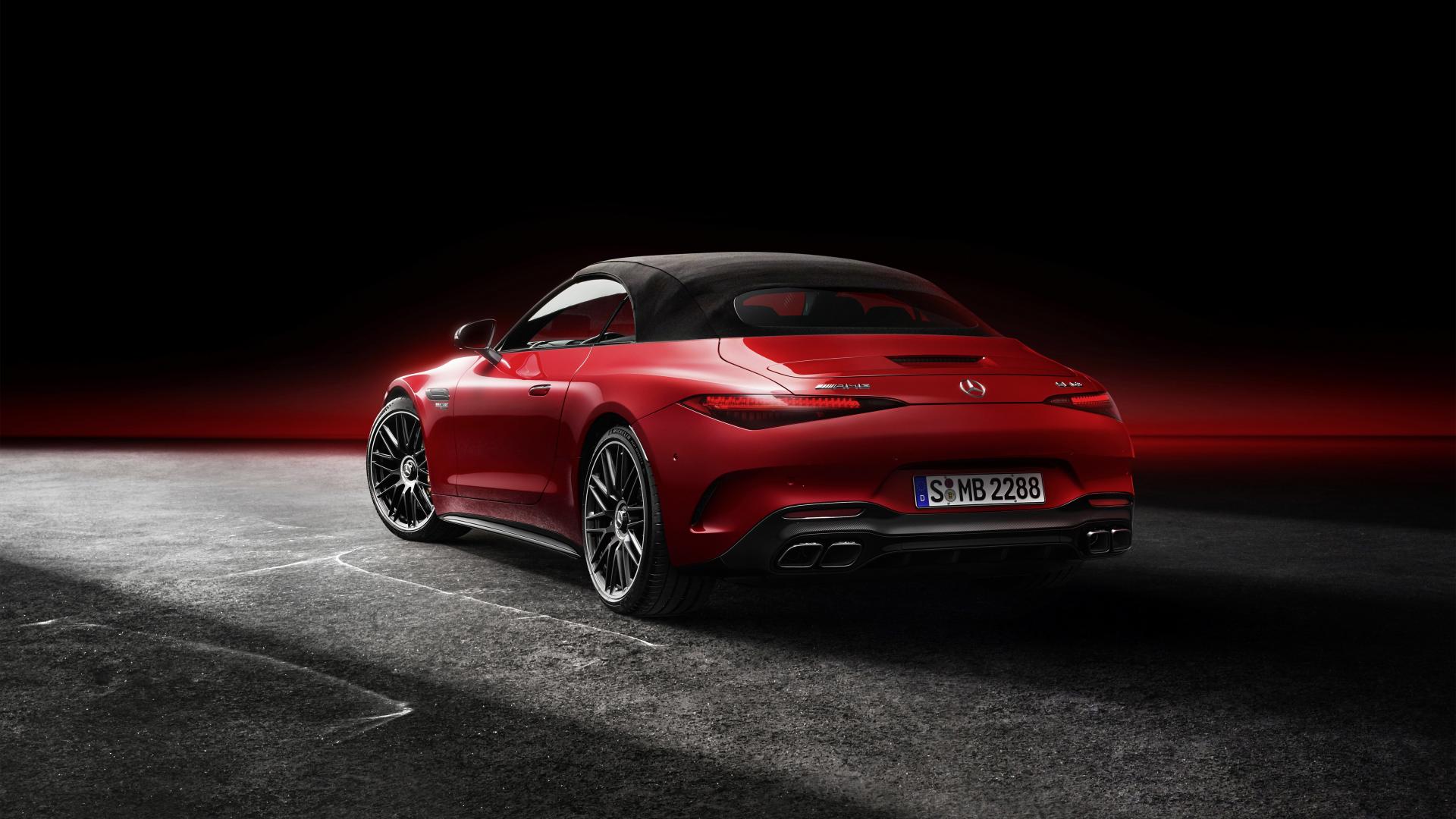 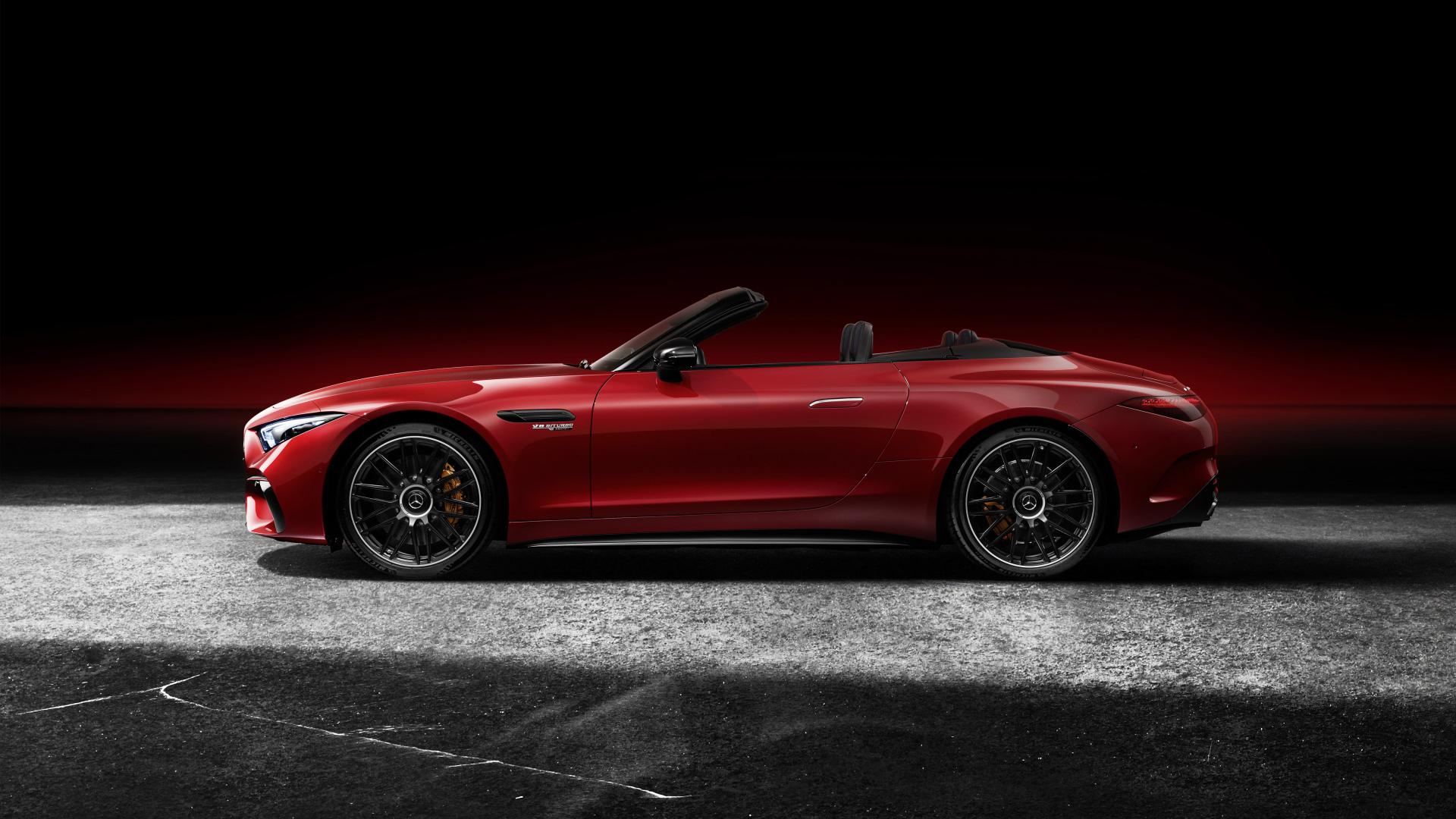 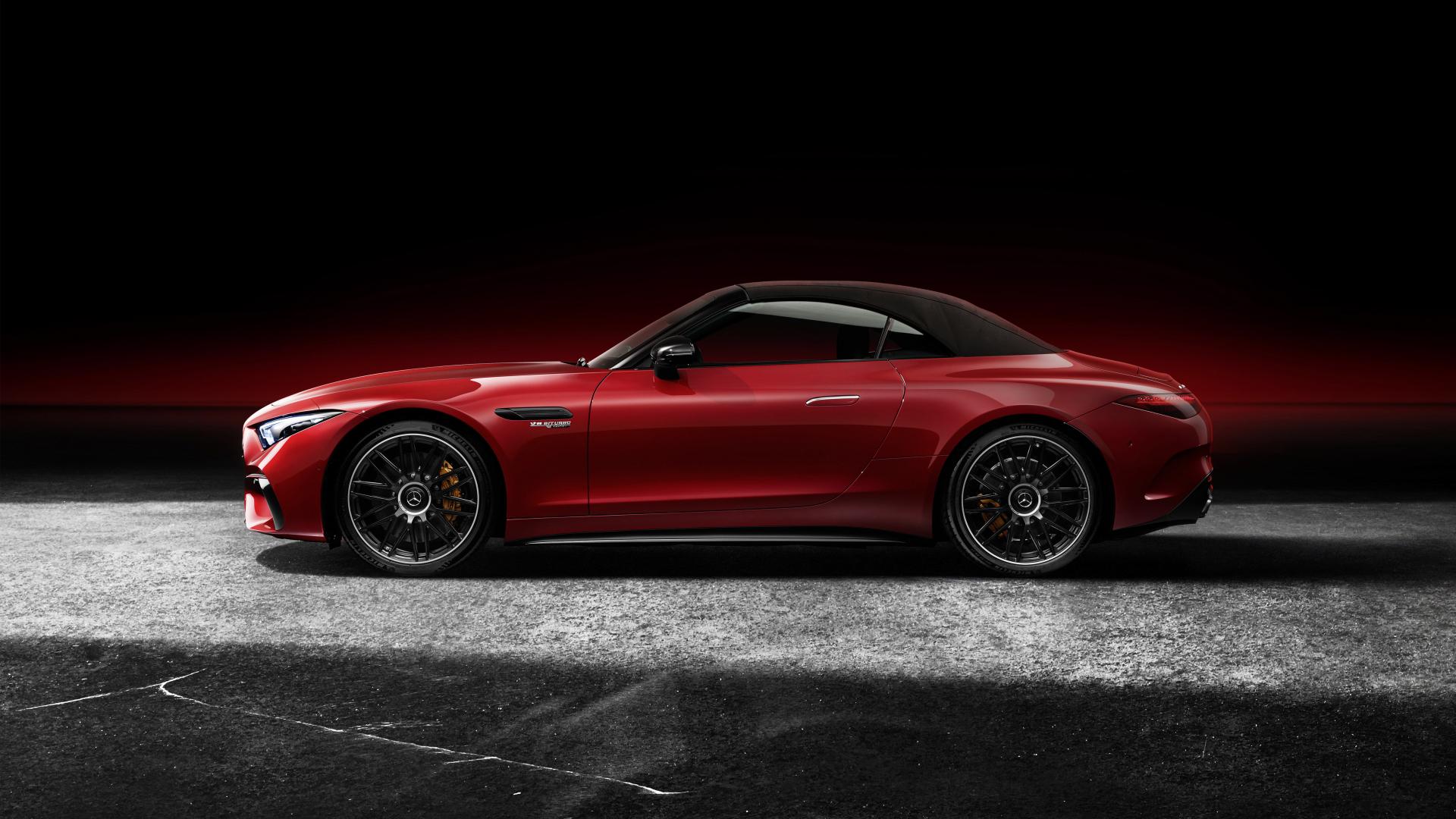 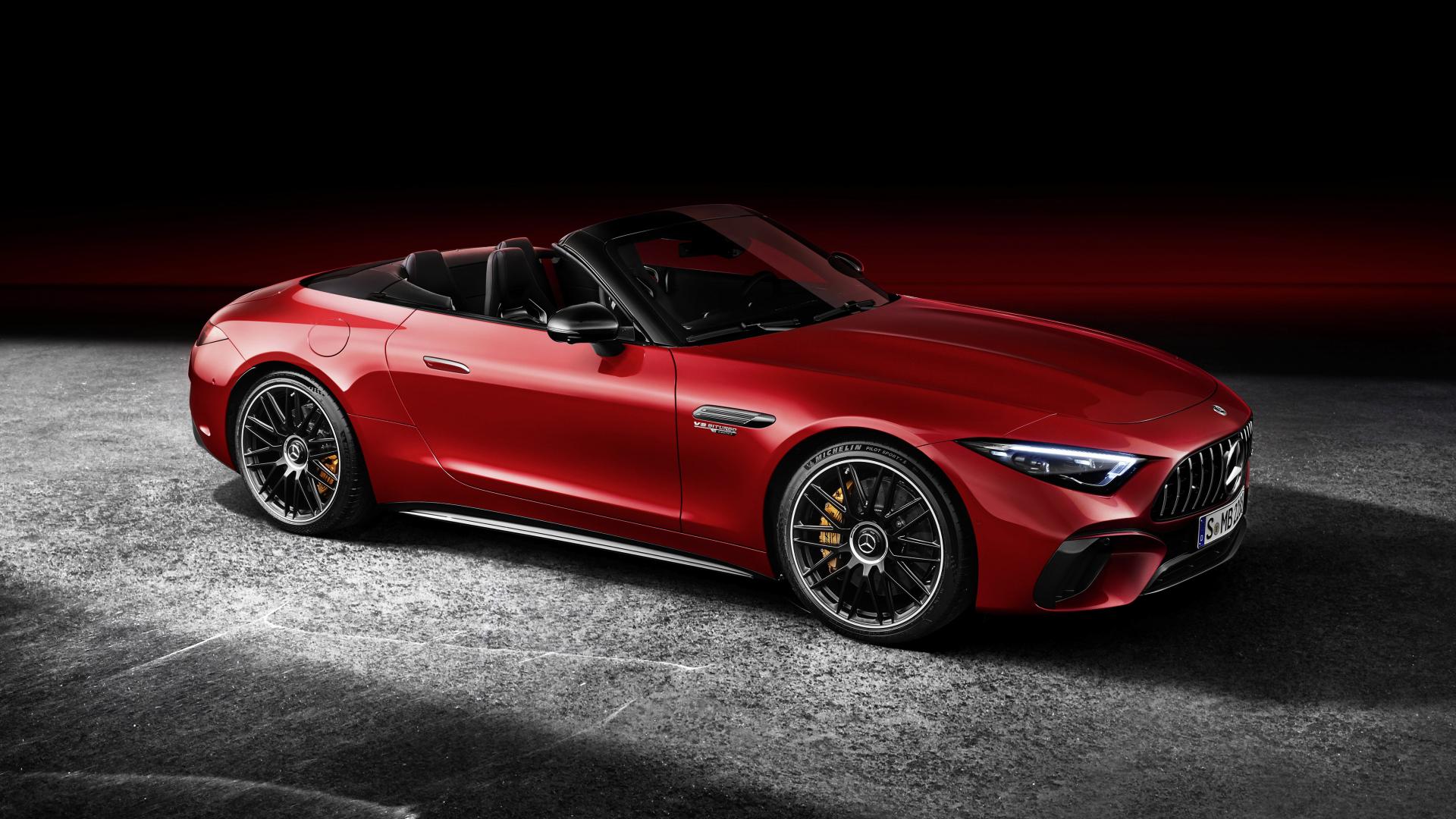 It also has a proper soft-top, which re-connects it with its forebears while releasing the design team from the trauma of packaging a pile of concertina-ed metal gubbins. Inside, the new SL imports the latest MBUX user-interface – remember when cars had dashboards? – but with some SL-specific twists.

There’s active aerodynamics, all-wheel drive for the first time in an SL, and an active rear axle for greater sure-footedness and agility. It’ll waft, sure, but this one is going back to the source.

"We wanted the new SL to return to its origins. It’s a sportscar so AMG took over the task of developing the architecture," Philipp Schiemer, Mercedes-AMG’s chairman of the board, tells TopGear.com. "But it had to be comfortable as well. We had to create the right combination. AMG’s guys are driving dynamics freaks, but the SL has to be completely useable as a daily driver. There’s also a lot of innovation in this car."

A plug-in hybrid and fully electric version are incoming although there will be no EQ SL. Mercedes’ ‘sportscar first/comfy boulevardier second’ ambition for the new car is made clear by launching it with the petrol V8 in such juicy form: it’s been a while since an SL was just as suited to the circuit as it is the golf club. 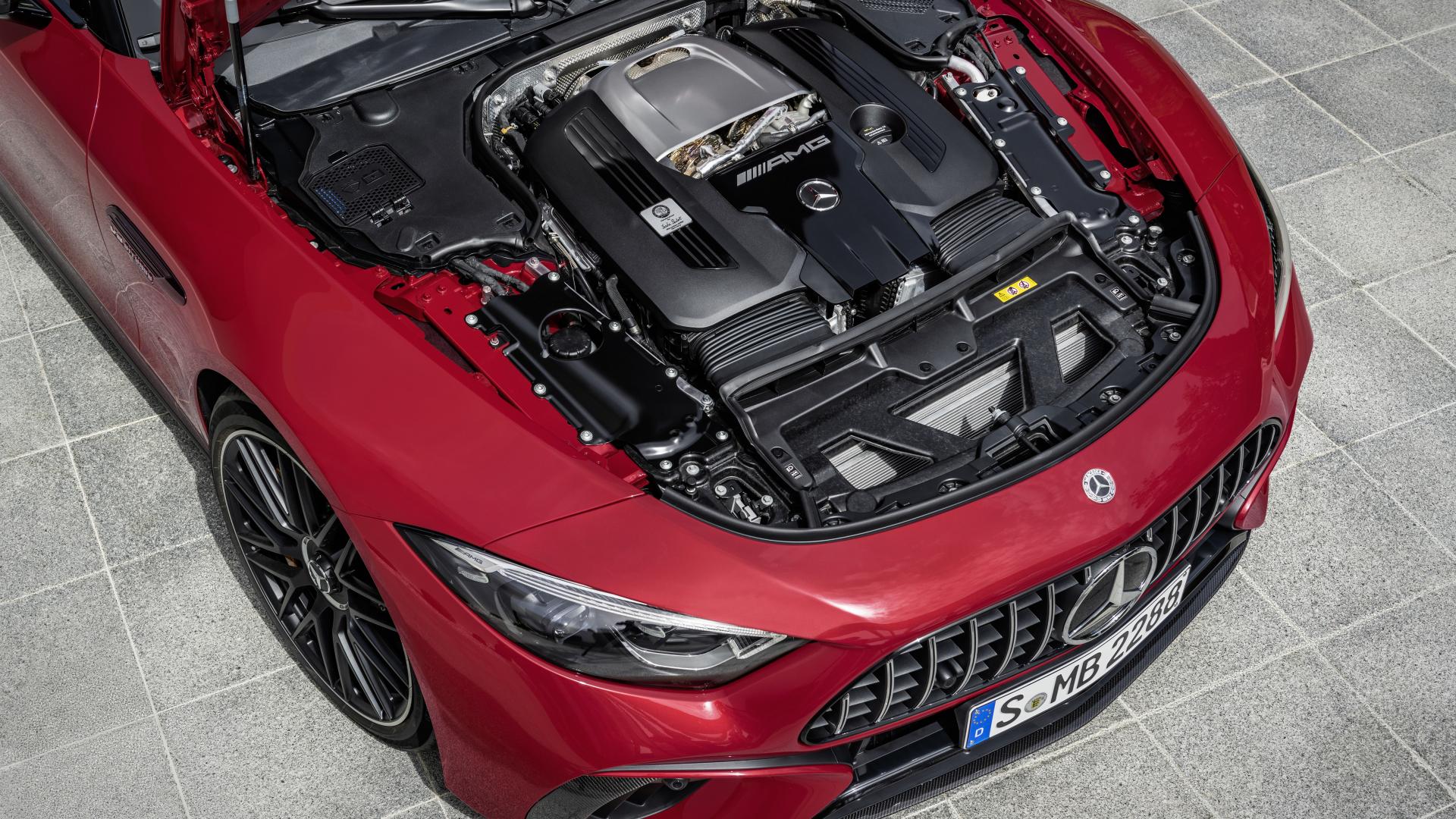 Various modifications have been made to the engine for duty here: there’s a new oil pan, repositioned intercoolers, active crankcase ventilation, and reworked intake and exhaust. The 63’s turbos run higher boost pressure and achieve even greater air flow, and the software has been tweaked.

It also benefits from liquid-filled active engine mounts, which manage the tricky compromise between rigidity and isolating unwanted vibrations. The SL’s cooling system is pretty elaborate with three tiers to manage the engine, turbos, intercoolers, transmission and engine oil. AMG’s 9spd MCT gearbox now has a wet clutch rather than a torque converter, which reduces weight and has lower inertia to deliver faster shift times.

They haven’t just nailed this thing together, you know. In fact, Mercedes says that the SL’s transverse rigidity is 50 per cent higher than on the AMG GT, which is very, very far from floppy. Overall, the bodyshell weighs 270kg. The SL also premiers a new five-link front axle to improve kinematics, with a similar set-up at the rear; the key components are made of forged aluminium. It all points to a car that has the AMG GT’s precision and agility overlaid with a renewed sense of comfort and the aggression dialled back.

The 55’s calipers are red, the 63’s yellow. Ceramic composite brakes are an option. There’s also the same bewildering suite of driver assistance programmes as you’ll find on other high-end Mercs, not all of which are especially user-friendly.

The front apron contains a wing and splitter to reduce lift and target airflow, there are aero-optimised brake ducts, while a two-piece active aero Air Panel uses electronically actuated louvres to hustle air either into cutting drag or into maximum cooling mode.

At the rear there’s an active rear spoiler which can adopt five different positions. An optional aerodynamics package is available for even greater efficiency – though it’s likely just as much about aesthetics – and there’s a choice of aero-optimised 20 or 21-inch alloy wheels. Needless to say, Mercedes has created a variety of exterior design options: these span Chrome, Night, Night II and Carbon Packages. Inside, it’s AMG GT meets new S-Class. Aviation influences abound, with a wing-like structural concept bolstered by four galvanised turbine nozzle air vents. The 12.3in display ahead of the driver has an intriguing cut-out section at the top of it, the display itself featuring some SL-bespoke graphics and read-outs. AMG’s Track Pace data logger is standard on the 63: you can add your own tracks to sit alongside the Nürburgring and Spa that are already stored in the system.

The cabin is dominated by the 11.9in portrait format central touchscreen, which can be electrically adjusted from 12 degrees to 32 degrees to avoid reflections when the roof is lowered.

The door panels are cleverly layered, the seats sculpted to appear lighter than they actually are with a headrest that’s integrated into the backrest. Airscarf is standard on the eight-cylinder SLs.

Note also that the new SL returns the car to a 2+2 seating configuration for the first time since 1989’s R129 model. The back's for kids only.

"This is the first SL I’ve designed despite being at Mercedes for so long," design vice president Gorden Wagener tells TopGear.com. "The 300 SL gullwing is the blueprint, the car I had in mind when we worked on the new car. That was a UFO when it first hit the market, you know? We started with a blank sheet of paper so we were able define everything. The SL was always a mirror of the decade it existed in, and this one is the SL of the digital age, an age of transformation. It was important to pick up on the heritage but also make it very technical and forward-looking."

We approve of the new direction. Are these BMW M5 Performance Parts cool or not? New looks, new tech, new lease on life. Does Merc’s baby saloon have what it takes to bring take ‘bach' the crown of the compact executive market? The new Mercedes E-Class is too clever for puny humans

Restyled lights look friendly, but underneath this is your new robot overlord