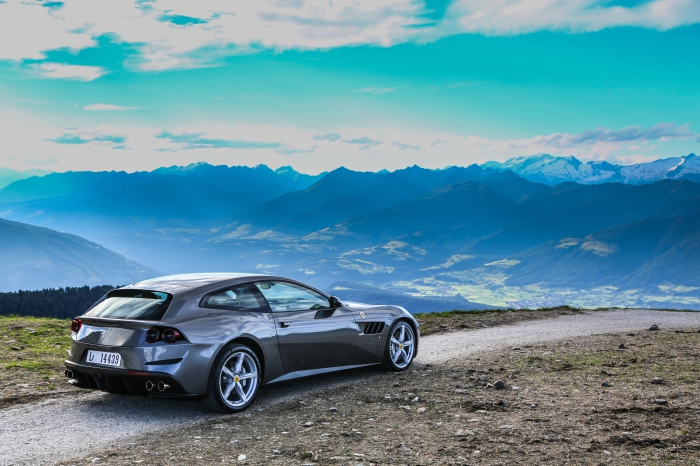 BRUNICO, ITALY - The windows hum imperceptibly as they go down again; it’s become second nature to my co-driver as we approach another tunnel.

I check the rear-mirror and spot the passenger in our ‘chase car’ readying her chunky smartphone, because they’ve been shadowing us for long enough over the past 40-odd klicks to become familiar with our routine.

This is Italy after all, and we are in a Ferrari. One thing we know for certain, the video isn’t going to end up on some thinly-veiled citizen vigilante site that offers paltry blood money for ratting on your fellow man – the pair in the car is clearly enjoying our full-bore tunnel blasts too much to have anything so nefarious in mind.

And that’s the allure of the Ferrari brand. Some people think of the brand as being overexposed, or just another flash toy for Mr. Moneybags to show-off in, but that’s probably because they’ve never driven one in anger. It’s easy to overlook the fact that even though Ferraris look the bees-knees, they’re far more than just another pretty face.

These are veritable racecars for the road in spite of their plush cabins and plus-prices, since every Ferrari is infused with the brand’s F1-winning know-how, and true to Darwin’s theory of evolution, each successive model is bred to be faster, gnarlier and more efficient than its predecessor. 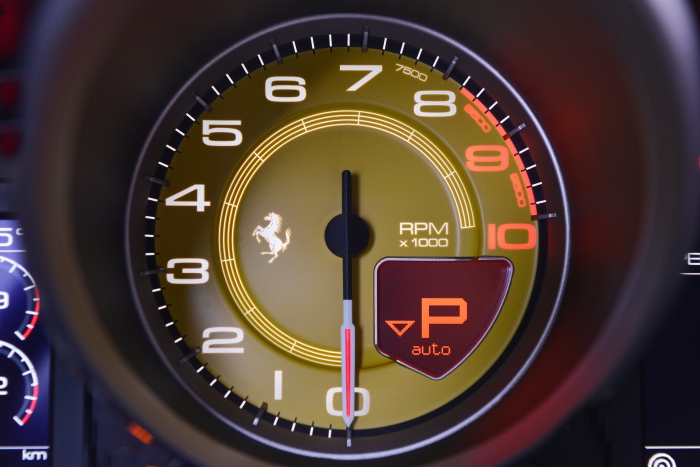 I spot the thumbs-up from the car behind as we enter the tunnel and start to pull hard from second gear. Like the FF this new GTC4Lusso replaces, the throttle action is natural and progressive, yet requires commitment from the driver.

It isn’t hair-trigger sensitive where even a twitch will unsettle the car; instead it will surrender its delights to deeper you plant the pedal. As the needle homes in on the redline, the 6.2-litre V12’s dulcet cruising note develops an angrier, snarlier edge as it rises to feverish pitch. 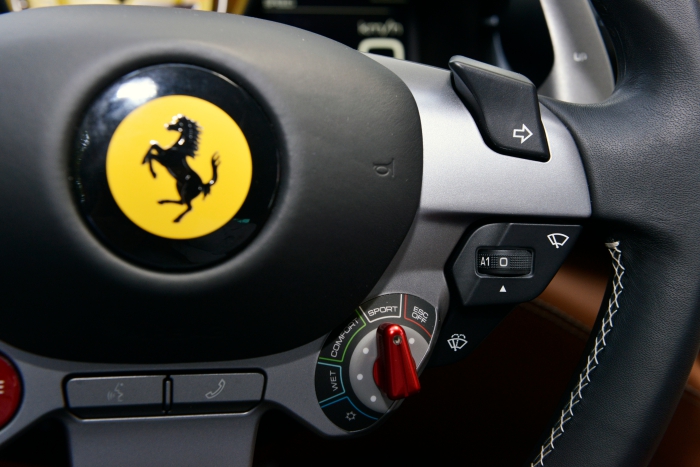 However, such is the testament to the GTC4Lusso’s hermetic insulation that the windows have to be open for its occupants to appreciate the full majesty of the richly textured V12 – otherwise like in the FF, it sounds disconcertingly muted from within the cabin even though Ferrari tells us the exhaust note has been tuned to be less intrusive at city speeds but more rapturous on the winding roads. The sheer musical mastery involved in fine-tuning the exhaust just-so, such that the full majesty of the high-revving naturally-aspirated V12 can be coaxed through is gob-smacking.

Each rising octave segues perfectly into the next as both pitch and intensity swell and create a palpable wall of sound. In something like the 2+2 GTC4Lusso, it means wholesome fun for an additional two friends or family as compared to the F12berlinetta. 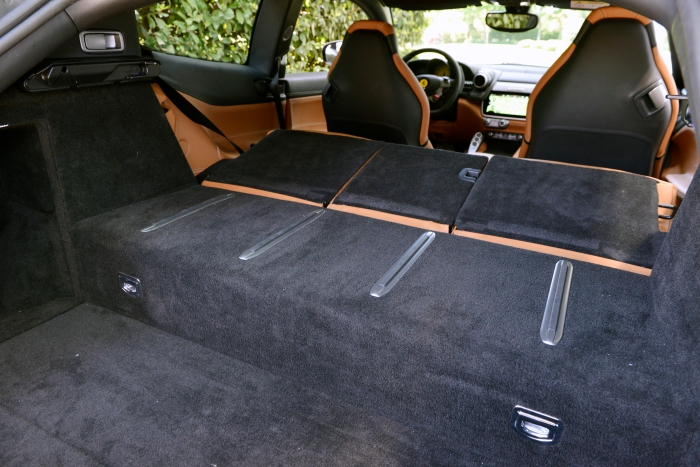 With the FF, Ferrari broke new ground with its ‘shooting brake’ interpretation of the traditional 2+2 V12 grand tourer, which if you recall, was immediately preceded by the 612 Scaglietti and the 456 before that – both of these were conventional, if not the most appealing of Ferrari’s offerings in their respective eras, but the FF completely blew ‘convention’ out the window, and its successor, the GTC4Lusso looks set to continue that trend. 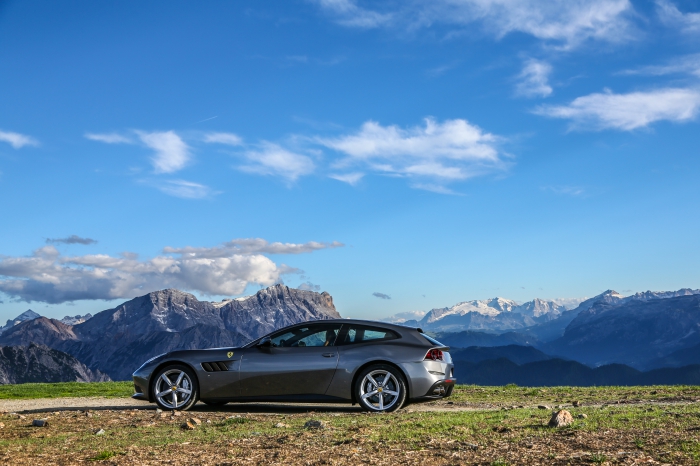 However, it will come as a surprise that the shape of the FF (and now the GTC4Lusso) isn’t the most controversial ‘shooting brake’ in the brand’s history. For that, there is the contentious 250 GT SWB ‘Breadvan’ from the 1960s; although this ‘Franken-car’ started life as a 250 GT SWB ‘Competizione’, it was modified by ex-Ferrari boffins (the very people who worked on the 250 GTO to be exact) for a privateer team to do battle against Ferrari’s 250 GTO at Le Mans in 1962.

This one-off cult masterpiece would eventually be recognised by Ferrari Classiche as a model of historical interest in 2010, which is why we’ve referenced it in this article. The GTC4Lusso’s name carries on its modern V12 no-gap nomenclature and is a mish-mash of various influences: 330 GTC, ‘4’ for four-seater, four-wheel drive, and ‘Lusso’ for well, luxury. But we feel it would be a disservice to the ‘breadvan’ not to bring it up in this context, especially with the GTC4’s aggressive rear roofline treatment.

The front and rear design of the GTC4Lusso is now more in line with the Ferrari DNA, especially if you’re looking at the tail-light panel, which incidentally now features quad lights (versus the FF’s two). 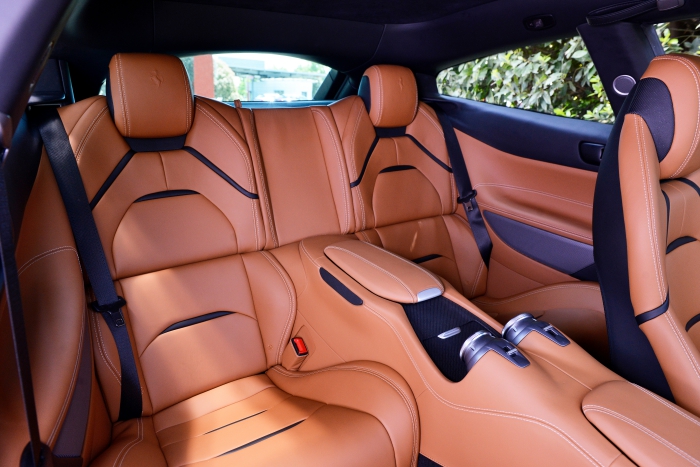 In general, estates and the ‘shooting brake’ genre have long been popular in Europe, but buyers in Asia prefer the more staid sedans, although we should qualify that recent focus has shifted to crossovers, which have pretty much taken the world by storm.

If you think the bias against ‘shooting brakes’ is bad in the realm of ‘regular’ brands, it becomes even more acrimonious in the million-dollar segment that the GTC4Lusso operates, since there’s a certain conventional beauty that pundits have become accustomed to from the Maranello-based Prancing Horse. 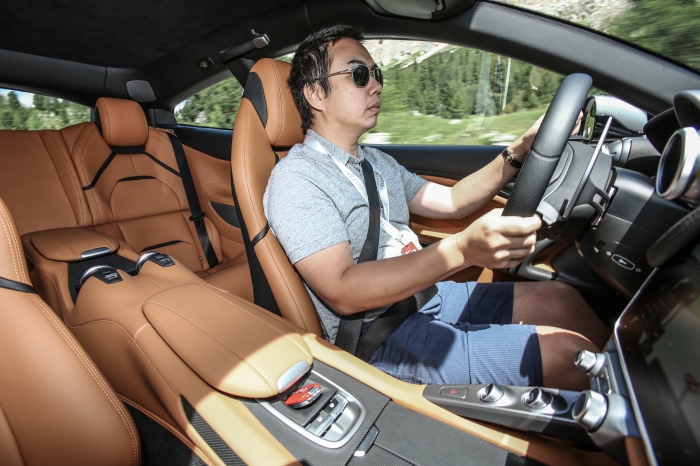 To us, it’s about pushing envelopes of both performance and products, and the GTC4Lusso’s styling is a bold departure from something prosaic like another SUV or crossover.

In this segment, I can’t think of another model that offers the same level of performance, in terms of both dynamics and utility – in addition to seating four and through-loading that’s useful for Ikea flatpacks, the GTC4Lusso boasts expanded carrying capacity of up to 800-litres if required, which aren’t the usual stats you’d think you’d be discussing as far as a supercar is concerned!

And that’s just it, really, because the FF (and now the GTC4Lusso) is designed for the owner who is accustomed to such superlative levels of performance that even something to fulfil a functional role has to be part of that rarefied realm.

This means two things: the GTC4Lusso will make a convincing only-car in an enthusiast’s household, but can also form part of a multi-car garage, with the other models made up of two-seat thoroughbreds.

Critics of the ‘shooting brake’ form tend to overlook the utility function of such shapes, and the fact that GTC4 owners already have either owned the most evocative sportscars, or still own them with the GTC4 joining the garage ranks.

The moment you slide into the car, you’ll see why we mentioned ‘co-driver’ earlier, because the GTC4 now features a dual-cockpit design, so the front passenger can take on a more active role in the motoring experience.

Technology only works if it’s seamless and intuitive – there’s no point in having multiple layers of sub-menus if navigating them is a chore. Not only is this new touchscreen beautifully integrated into the centre fascia, it doesn’t look like an aftermarket afterthought, the interface is even easy to use.

Ferrari electronics easy-to-use? Now that’s something I never thought I’d be saying! The FF already featured a display of sorts for the front driver, but the GTC4’s takes it to the next level. The co-pilot can cycle through several screens detailing GPS, in-car entertainment, manettino settings and engine/throttle/g-force status, with the co-driver now endowed with the ability to modify the first two. 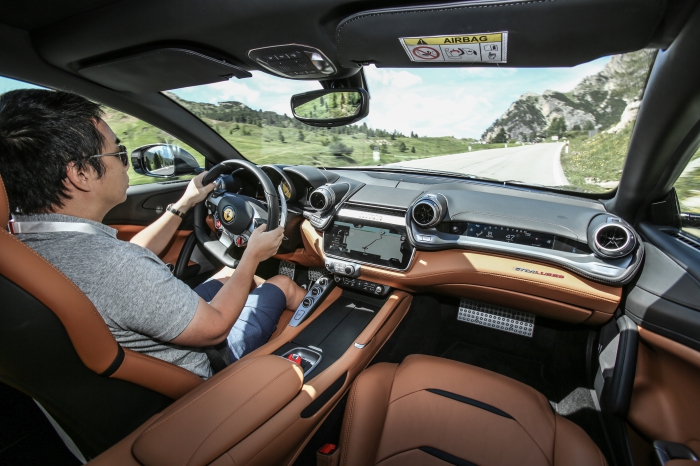 Trick trim and trappings aside, the V12 meat of the GTC4 sees higher compression than on the FF (13.5 from 12.4), with increases to horsepower and torque. For brisk city performance, 80 per cent of its 697Nm is available from just 1750rpm, but the car’s docile composure and pliant ride about town impresses the most – not that it stopped bystanders from rubbernecking! After we are clear of the Dutch caravans and convoys around Brunico, we finally get to put on more speed. The GTC4 adopts some bits from the F12tdf, which include changes to the combustion chamber, piston design, as well as active rear steer that is integrated to the 4RM-S system for four-wheel drive and four-wheel steer.

All this helps make for nimble and extremely explosive performance, even on the tight winding roads. Active rear steer creates the effect of artificially reducing the wheelbase of long wheelbase cars at lower speeds to improve agility, but maintains stability at higher speeds. 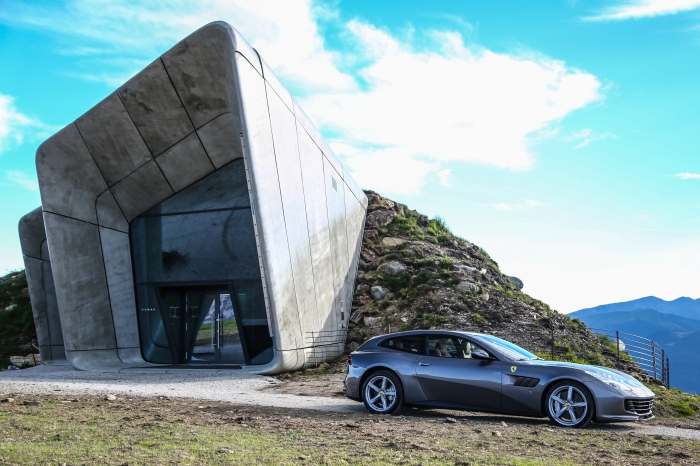 The pace takes one’s breath away, and the heckling from the co-pilot about lack of ‘g’ quiets down as we’re sucked into the intense whirlwind of the V12’s mighty symphony – you won’t drive the GTC4 to escape the Armageddon, but it’s the sort of elemental force that will lead the four horsemen as they storm across the land, and with two behind no less!

If we had our way, we’d never have the music running during the fast drives because that would only detract from the driving experience, like plugging into Bieber at a Bocelli concert. 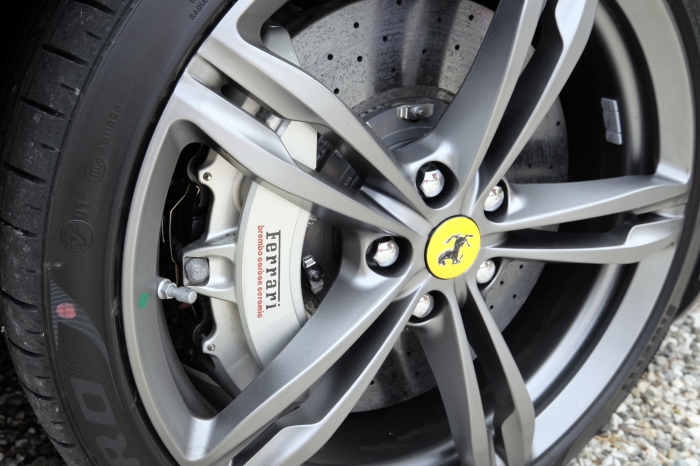 The cornering grip defies belief for something ‘all-wheel-driven’ and of such proportions. Like the other modern Ferraris, the GTC4’s steering is light, almost uncomfortably so, but razor-sharp in responses. You quickly get used to its telepathic reflexes to finely manoeuvre it through corners with millimetre precision.

There’s so much confidence to push it along the mountain roads that a glance at the speedometer never fails to shock and awe. Our test-car was equipped with carbon-ceramic brakes, which unlike earlier iterations, are no longer hair-trigger sensitive so it’s possible to achieve a good modicum of modulation that does not unsettle the car. It’s not wild and wanton like the F12tdf or even the F12berlinetta, but this isn’t to say it can’t hold its own when push comes to shove, especially on real world, fast-road use. It’s all about having your cake and eating it too, because the really fun driving roads come in-between large tracts of brain-dead motoring, and that’s when you’ll want something as comfortable as GTC4Lusso. The fantastic thing about the GTC4Lusso is how it cloaks its supercar-powers under the civility of 2+2 Grand Touring anonymity. The Ferrari, and an equally blue Fiat Abarth 595, are being auctioned for charity