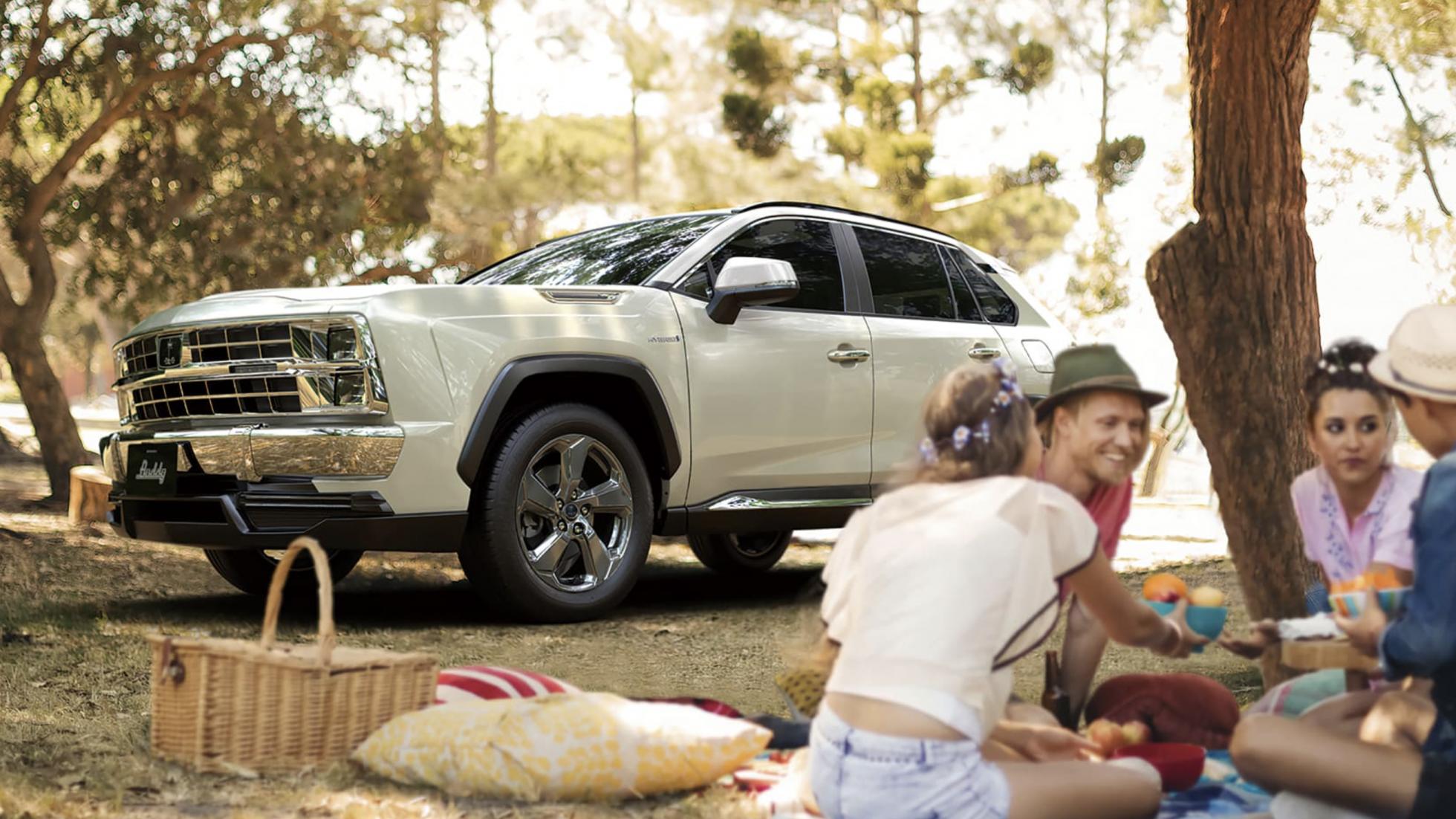 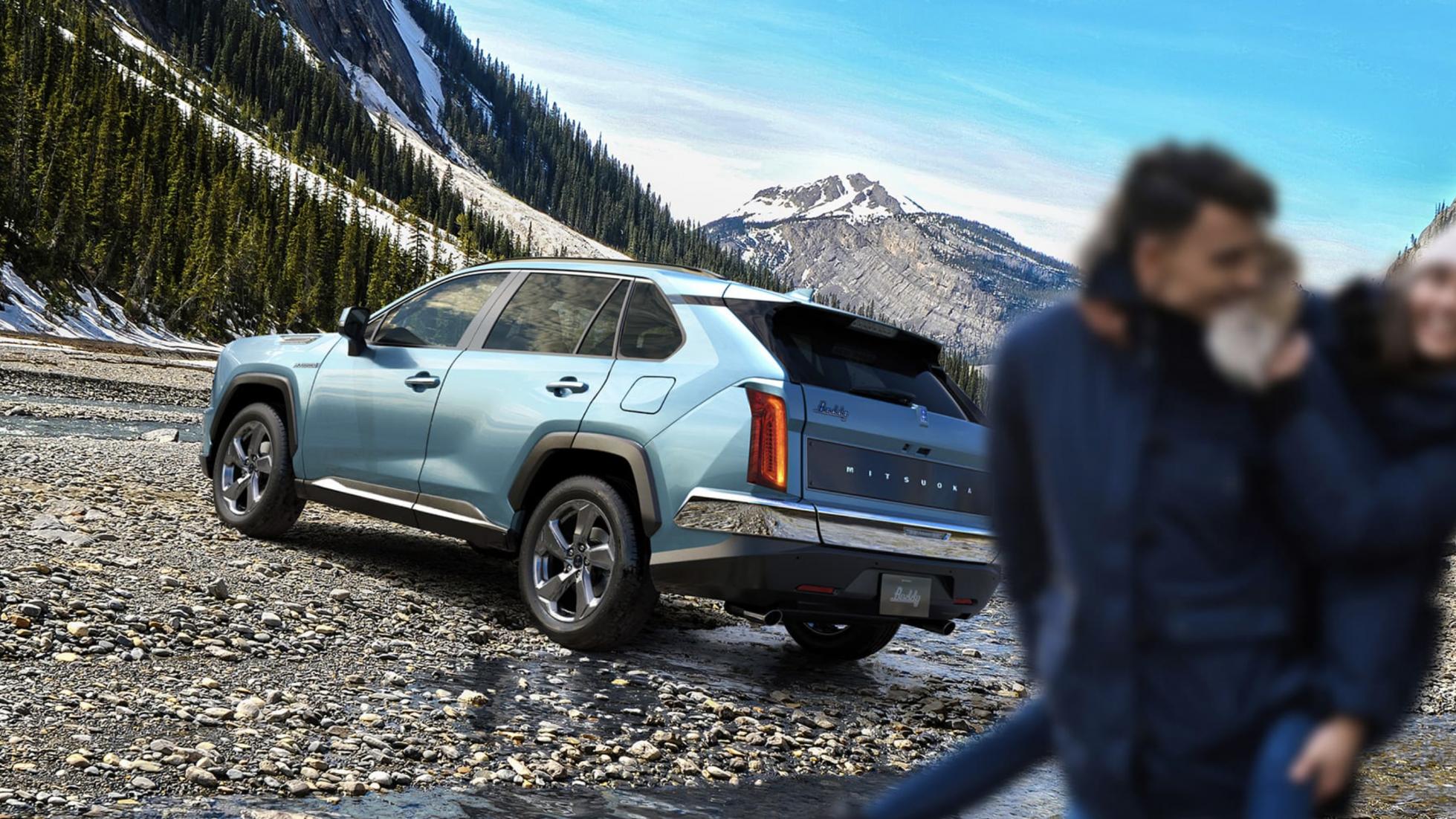 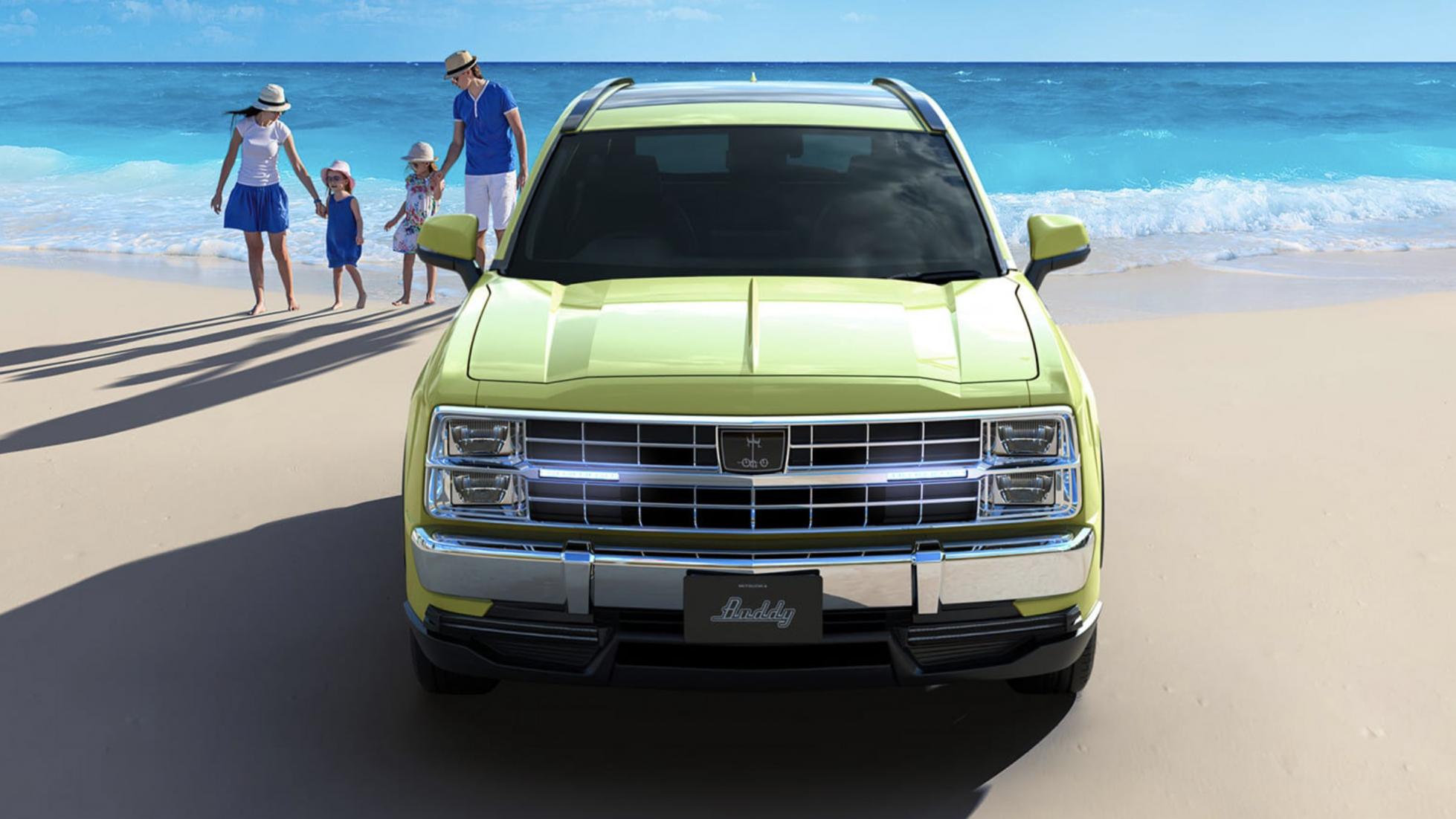 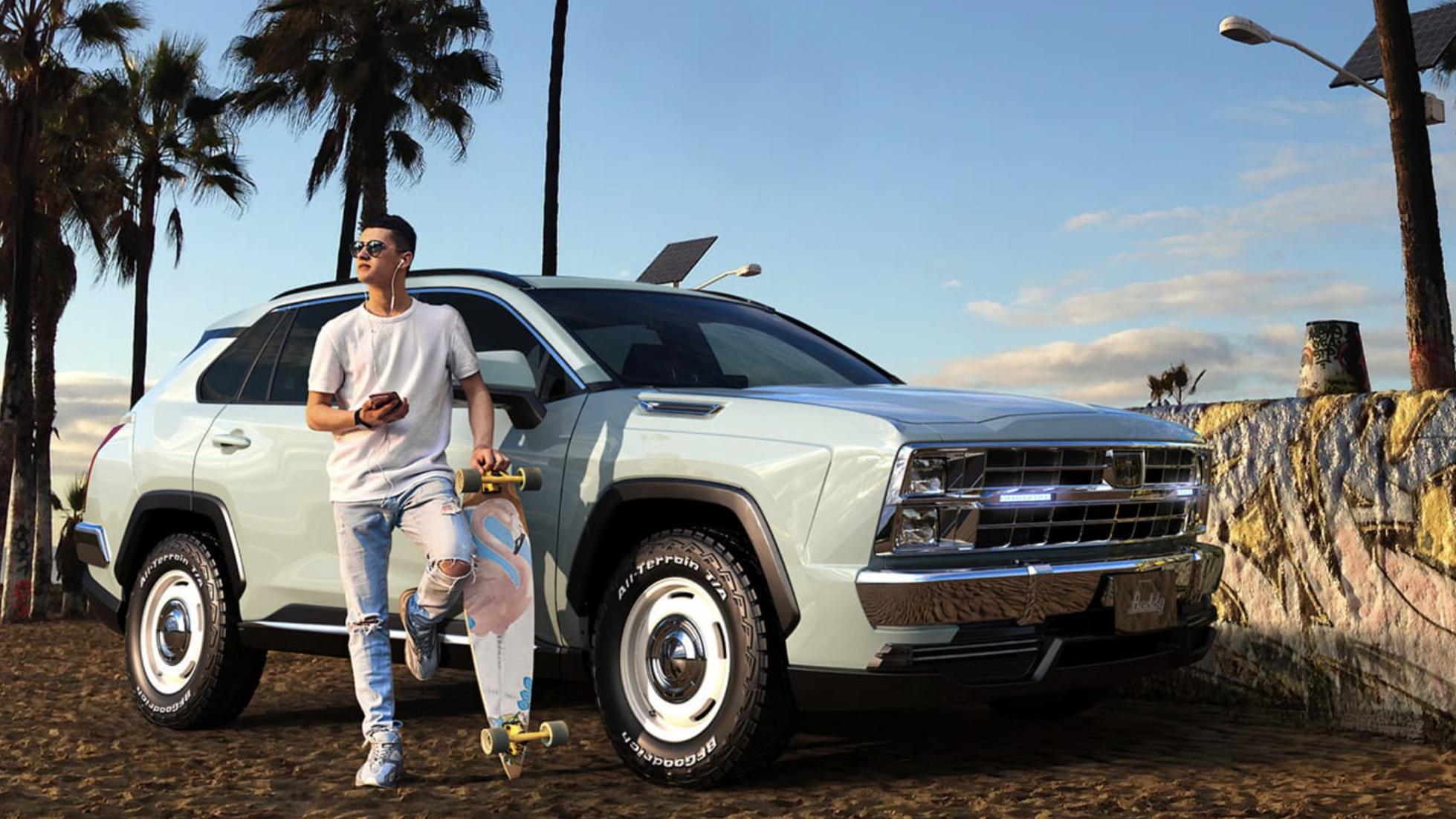 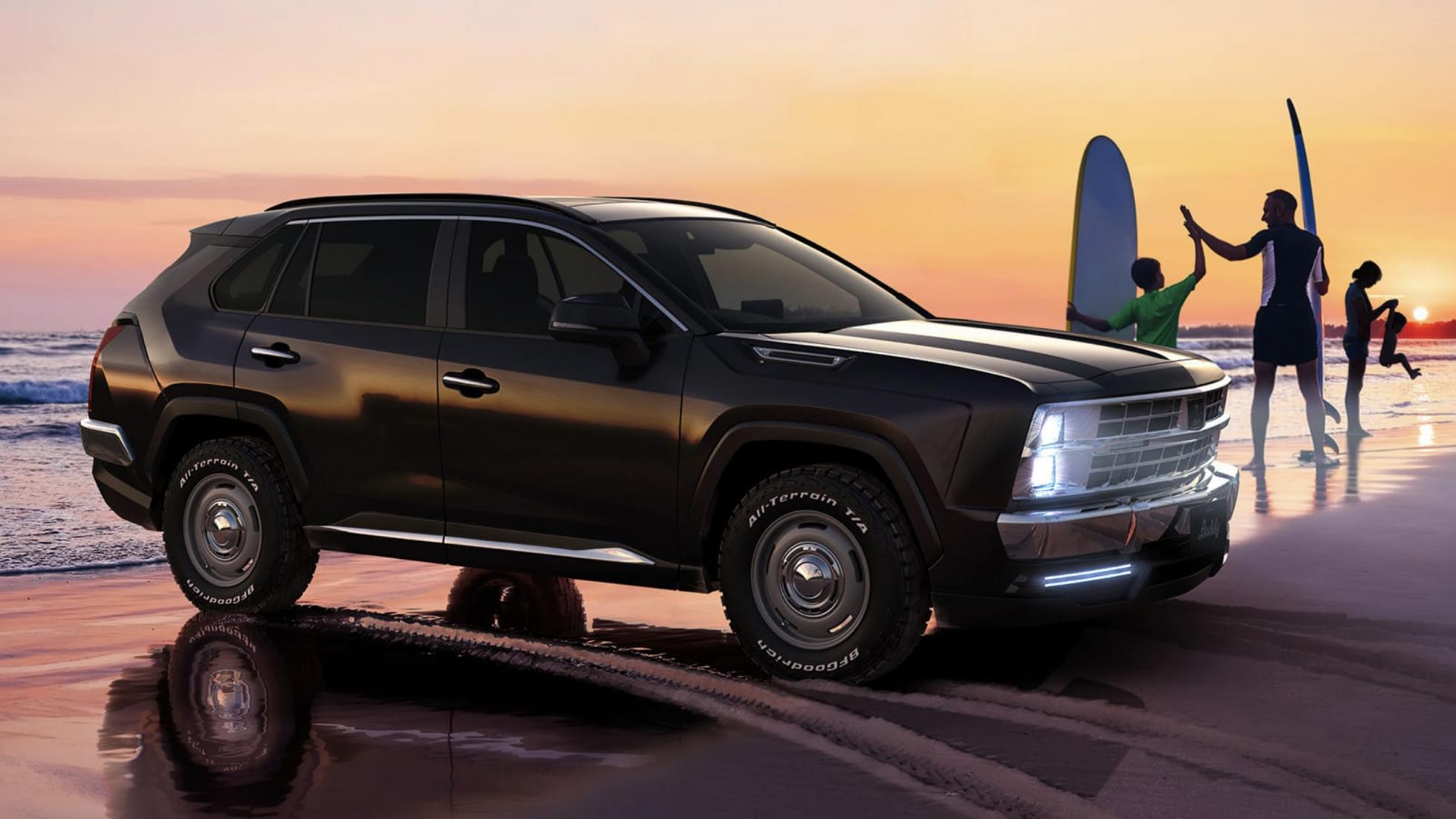 When we think about it, you’ve probably got more chance of predicting next year’s lottery numbers than guessing what crackers Japanese coachbuilder Mitsuoka is going to do next. Over the years, this wonderfully zany outfit has built some properly potty cars.

They include the Orochi, a bizarre sportscar based on an eight-headed, eight-tailed dragon. It’s also grafted many a face onto a car, from old school Jaguar XK120s, to the Mitsuoka Roadster, a third-gen Mazda MX-5 it morphed into a sort of art-deco Cruella DeVil cartoon. But more recently it’s been inspired by good old America.

A few years ago, they showed us the Rock Star, a Mazda MX-5 that went for a haircut clutching a picture of a classic Corvette C2. And it seems it’s not finished with the American dream yet as we’ve just been sent this, the Mitsuoka Buddy. A car that mixes American muscle with Japanese hustle.

Using a Toyota RAV4 as a base, Mitsuoka sharpened its scalpel and cut out some influences from old-school yank tanks before splatting them across the front and rear of an SUV built on the other side of the Pacific. What you’re left with is quite… dramatic.

Let’s start at the front where there’s chrome for days. Clearly robbing design cues from Chevy’s back catalogue, there’s a shiny K5 Blazer-style full-width grille, stacked two-piece rectangular headlights, a big chrome jaw/bumper and some new LED nostrils. It’s an iconic look… which, weirdly, it kind of pulls off.

Until you look at the side, where it’s pure RAV4 roofline and silhouette save for some new creases in the bodywork and chunky All-Terrain T/A tyres wrapped around 1980s-style steel wheels with chrome hubcaps. Because chrome is king, remember.

Then it’s back to a time warp as you walk around to the rear where Toyota lights have been chucked in the bin and replaced with some slender vertical options not too dissimilar to the Cadillac Brougham, while a big fat contrasting trim panel made famous on Jeep Grand Wagoneers has been slapped across the back and decorated with chrome lettering. Because, remember, chrome is king.

Dropping an inefficient large-capacity V8 like a 454-cubic-inch under the hood would be the obvious thing to do next, but Mitsuoka doesn’t deal in obvious. So your options are Toyota’s 2.0-litre four-cylinder turbo petrol engine, or – if you’re feeling fruity – a 2.5-litre four-wheel-drive hybrid, both from the current generation RAV4.

Unfortunately, there are no pics of the interior yet, but if you’ve ever Googled ‘Americana’ you’ll probably have a good idea of what could pop up. We’re imagining 1960s diner vibes with plenty of chequers, maybe a good ol’ American cheeseburger in the glove box and a “Yee-haw” horn.

Order books will open in Japan on 26 November. How much it’ll cost? No idea. Then again, can you really put a price on character? 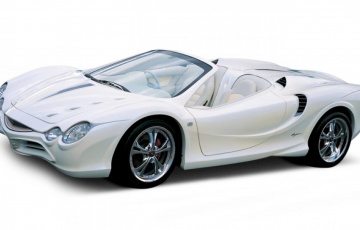