This is it: the 911 reimagined by Singer and Williams 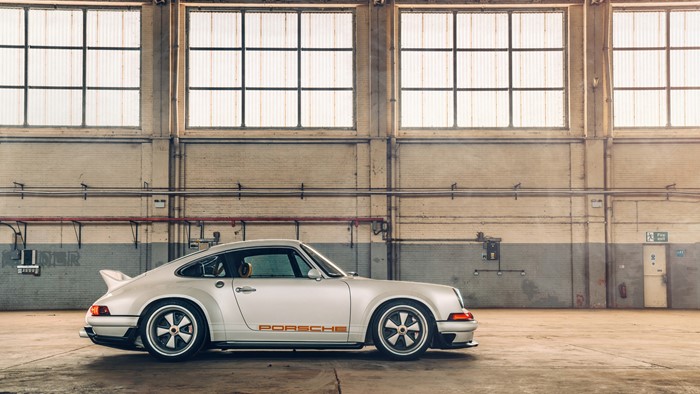 Singer's 'Dynamics and Lightweighting Study' is a US$1.8m vision of the ultimate air-cooled 911 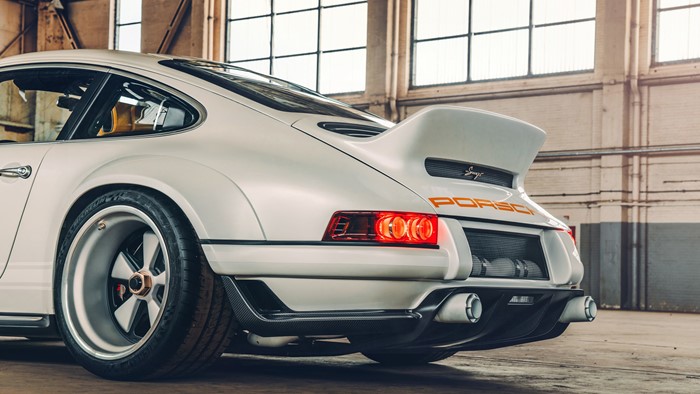 Rob Dickinson, former musician and genius behind Singer Vehicle Design, is walking towards me in an enormous, empty warehouse, sparking a fag. He’s wearing khaki shorts and cap, a wrinkled white t-shirt and dog-eared trainers.

He stretches out his right hand, we exchange pleasantries then it’s straight to it, discussing the car that’s been obsessing over for the last four years, and the passion just starts flowing out of him. 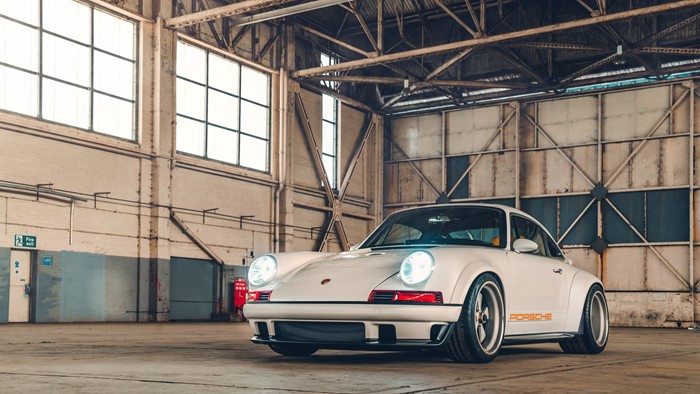 We’ve managed to intercept both Rob and the first example of his most ambitious project to date, on their way to Goodwood. The car you’re currently gawping at is the product of a collaboration with Williams Advanced Engineering to develop the ultimate, no-expense-spared, air-cooled 911 – the snappily-named Dynamics and Lighweighting Study.

Renderings were released months ago, but is the first time anyone outside the company has seen the finished product. Rob himself only clapped eyes on it two days ago at Williams’ facility in Oxforshire, where no more than 75 examples will be reimagined.

“I’m very very pleased,” says Rob, taking a contemplative drag. “It looks like the drawings, which is always helpful.” 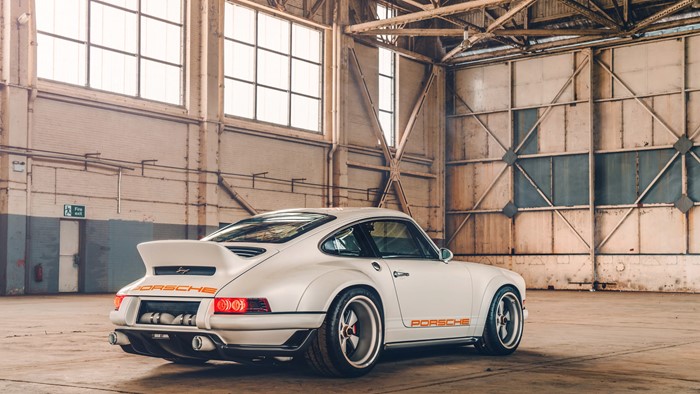 I take him back to the beginning, to the dream that sparked all this off. “What would a classic Porsche 911 look like if we touched it with a Formula One team? That was the Hollywood pitch. To bestow upon, what we think is the most important sportscar in the world, the golden benefits of the modern age. Properly, do it properly with a proper budget and proper support.” 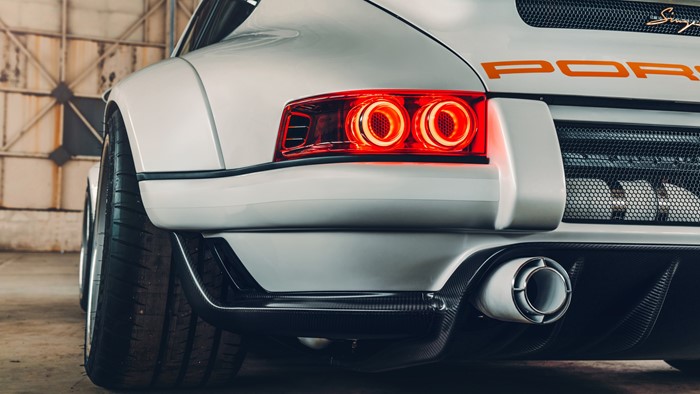 But ideas of this magnitude are nothing without authenticity, which is why Rob knew if he wanted the right names attached to the program he had to act fast. “The question was how could we present the most advanced, lightweight, air-cooled 911 that the world will ever see?

And crucially, while there were still people who had touched the original back in the 60s – principally Hans Mezger and Norbert Singer. They were consultants, they kept an eye on us and kept us honest.” Williams Advanced Engineering has been Singer’s major partner in all this, entirely redesigning the front and rear suspension (but keeping the traditional trailing arm set up at the rear), the brake system (incorporating Brembo CCM-R discs, the same compound you’ll find on a Bugatti Chiron), conducting a full aero study to optimise every square inch of the car’s surface, building the world’s finest air-cooled engine (more on that in a bit), and putting the car through an intensive development program, something not entirely familiar to Rob. 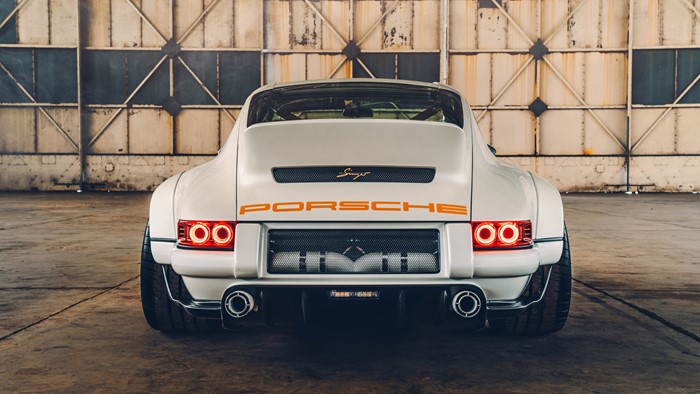 “Whereas we’re quite rock and roll back in California, here in England there’s a bit of a culture difference and that’s been a learning curve for us. It’s good, though, the discipline of going through proper development cycles.” And once Rob was working closely with Williams he starting picking up the phone to a list of “hero” companies that were synonymous with the 911 over the last 50 years. 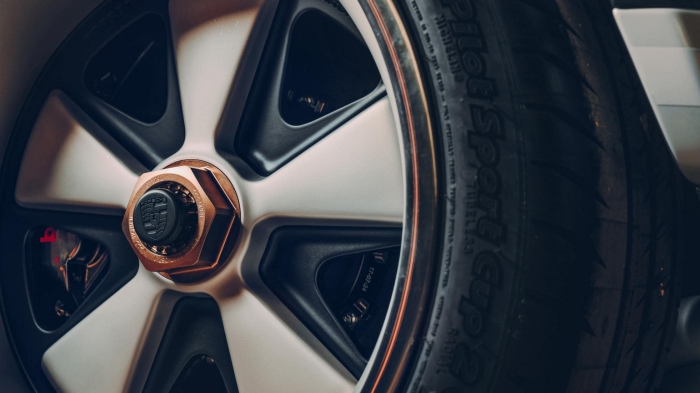 Michelin agreed to make a bespoke 295 Pilot Sport Cup 2 tyre, stretched a little for a 11.75 rim to give the perfect curve on the side wall, something Rob’s famously obsessed with. “It’s where the rubber hits the road, it’s where it all starts. If you can get this right, you’re off to a good start.”

Brembo were on board for the brakes, Momo were happy to make a sensational bespoke carbonfibre steering wheel, XTC produced the adjustable dampers, Hewland worked on the 6spd manual, Recaro delivered on the seats, and BBS crafted perhaps the most striking feature of all, those deep-dish 18-inch wheels.

“We wanted to celebrate the 1973 Carrera RSR, the wide body version of the ’73 RS. It was iconic for many reasons but its deep dish fixed wheels were its calling card. BBS had never done a Fuchs wheel, and we thought it was a great opportunity to reimagine the Fuchs wheel at its apogee, which is forged magnesium with a centre lock. We looked at carbon wheels, but it didn’t make sense.” 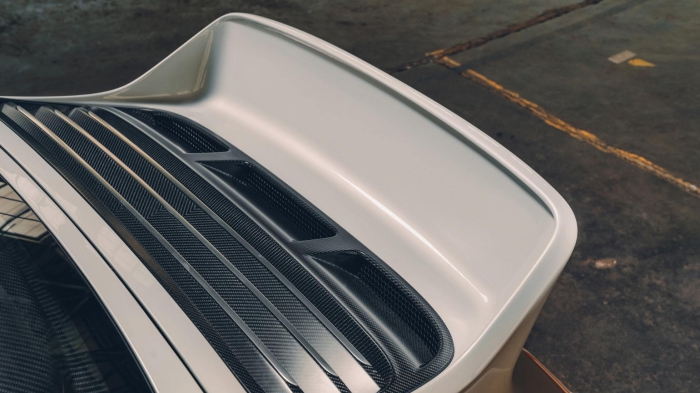 In terms of aero, the ducktail spoiler was non-negotiable, but Williams’ job was to make it actually work. On development cars the air was detaching at the trailing edge of the roof meaning only a tiny fraction was actually hitting and working on the wing.

The solution was a channel chiselled into the roof and a beautifully-integrated air bridge that keeps the flow stuck all the way down the rear screen and hitting the ducktail, complete with a 5mm gurney flap, square on. That, coupled with a functional carbon-rear diffuser that arcs away under the tailpipes and a carbon front splitter, means proper downforce, perfectly balanced between the front and rear.

But amid all this engineering cleverness, it’s the engine that takes the biscuit – a 4.0-litre, air-cooled, naturally-aspirated flat six with four-valve heads revving to over 9,000rpm and producing around 500bhp, fed by two ram air intakes in the rear quarter windows. It’s also a piece of pure sculpture in magnesium and carbonfibre, with a titillating look at the pipes visible through the rear mesh. 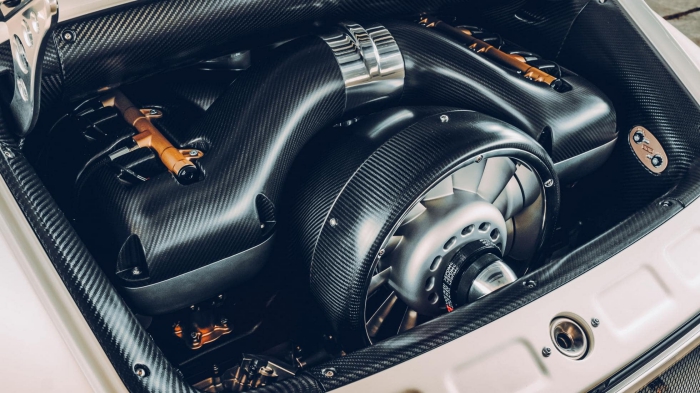 “Fantastic as modern 911s are, we didn’t want to turn this into a GT3 RS, we wanted to retain the essence of the air-cooled magic, but burnish wherever it could be with this fantastic focus. It’s an absolute monster, it really is. It sounds very unusual.”

Interestingly, Rob has resisted the temptation to experience the engine in one of the two prototypes, so far. “I’ve talked to people who I trust deeply and they’ve told me about it, but I’m deliberately not driving it. I want to get in the ‘finished’ car like a customer, then I’ll be the judge of whether it’s finished or not.” The interior is as spectacular as all Rob’s 964-based creations, and riddled with insanely cool touches. Like the rear-facing ‘S’ logo on the rear strut brace, the gold-trimmed central rev-counter that’s “rather ostentatious, but worth it” and the balsa wood insert in the carbonfibre gear lever - a nod towards the 917 racing car from the 60s.

A fully-stripped version that dips below 1000kgs will be offered, but the half-way house of this first car “feels about right” for Rob. Feels like a huge privilege to me, just standing here, staring at it with the man who made it possible. We often talk about attention to detail being the deciding factor between successful design and greatness, and Rob, perhaps more than anyone else in our industry has the obsession it takes not to get things right, but to get them perfect. Fitting, then, that his mantra ‘everything is important’ is inscribed on the sill plaque. But perfection doesn’t come cheap. Prices start at US$1.8m, a number Rob gives up under duress, but is quick to defend: “That’s as cheap as we can do it for the madness that’s gone into it. Trust me, no one’s getting rich making these things for what it’s worth. I think the world is a better place for nut jobs like us to be around doing this, and there are of course other great companies having a go as well.”

But there’s a deeper meaning to this car, a legacy that Rob wants to leave behind. “It’s difficult for me to say this without sounding like a little bit of a d***, but I do think these 75 cars will be historically important in years to come. Getting this group of people together to celebrate this iconic machine, in such a focused way, with such a proper budget, won’t happen again.” Is it wrong to put a modern touchscreen in a classic Porsche? 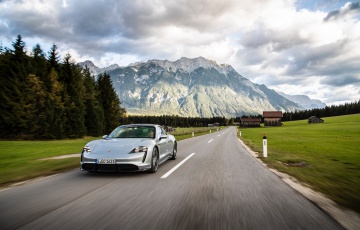 What are some of the coolest rear wings or spoilers fitted to cars?