The A Theme : Mercedes-Benz A200 Driven [review] 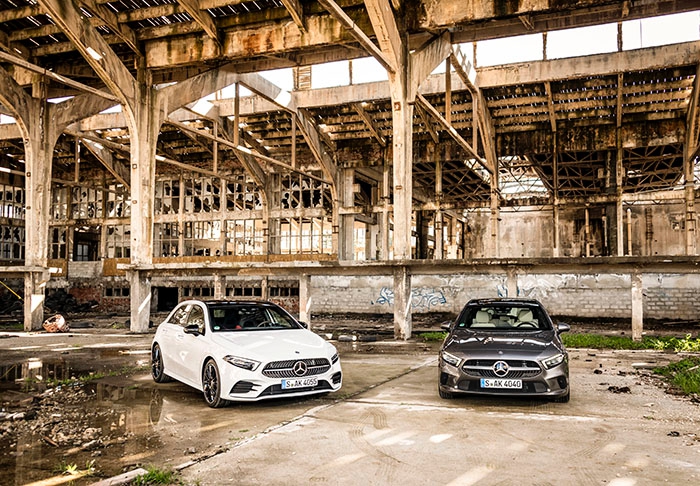 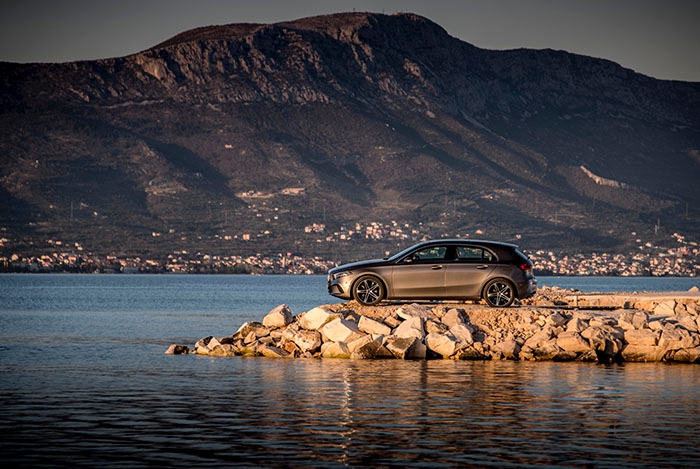 Split, Croatia – If you’re 40-something (like us) or older, you’d have grown up in the 80s to 90s where hatchbacks were trendy, young and sporty, not that they’re not these days, but we’ll get to that in a bit. Oh, and we’re not referring to the fiery ‘hot-hatch’ sub-genre either, but the hatchback segment generally, which serves the purpose of all-rounded runabout. 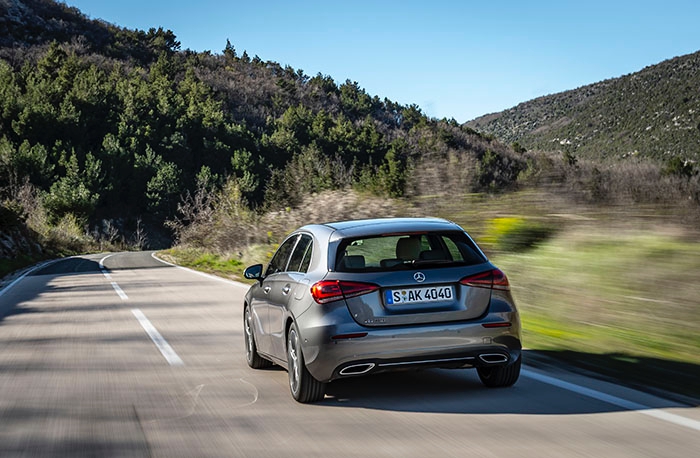 Hatchbacks evolved to serve a need for the young and mobile in the cities (less stuffy than traditional sedans/limos, more stylish than utilitarian stationwagons), and were quickly adopted by the fashionable; moreover, apart from boasting the utility of the eminently functional stationwagon, hatchbacks are pert, nimble and easy to manoeuvre and park in the city.

Now, this was before the rise of the crossovers, which have taken the world by storm over the past eight years or so, and in many ways, have replaced the humble hatchback as the vehicle to be seen in. 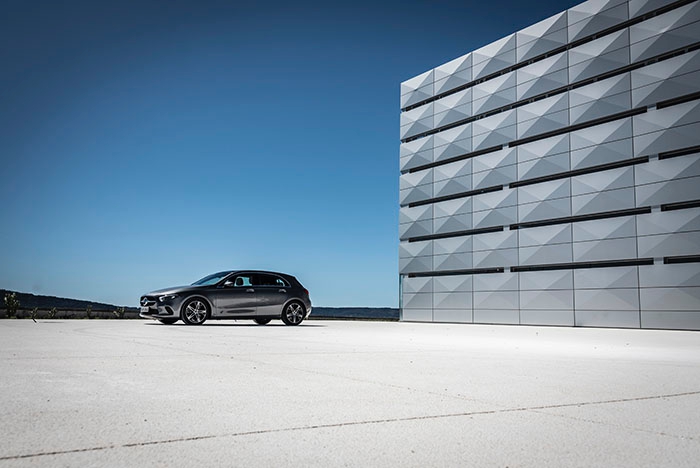 At the launch of this latest, fourth generation A-Class (codenamed W177), the promo material is decidedly hip and young, with a proliferation of nubile girls and grizzly bearded men-boys, so there’s no doubt as to which demographic the brand is hoping to target. 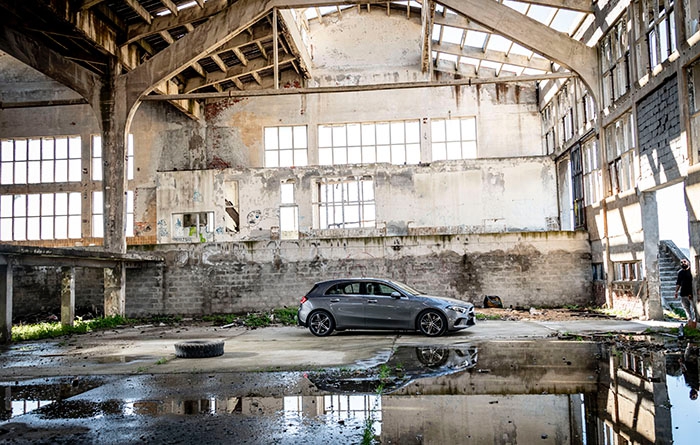 Based on a casual poll, the young people we met with hatchbacks had them bought by their parents in the 40-something and older bracket, typically as a “starter” or “first” car.

The other group of owners I encountered spans mid-40s to 70, because the hatchback does without the chunky bulk and flashiness of a crossover-type vehicle. In some occupations, such understated discretion is preferred, as is the sharper handling the hatchback delivers due to its lower centre of gravity compared to a crossover. In case you’re wondering, the ‘A-Class’ isn’t Mercedes-Benz’s first ‘baby’ of the family – that honour goes to the iconic W201 190 E, which made its appearance in 1982. Up to the 1980s, Mercedes-Benz was only known for its luxurious limousines, so at the 190 E’s launch, the world couldn’t quite grasp how all the superlative traits associated with the brand would manifest themselves in so compact a car. 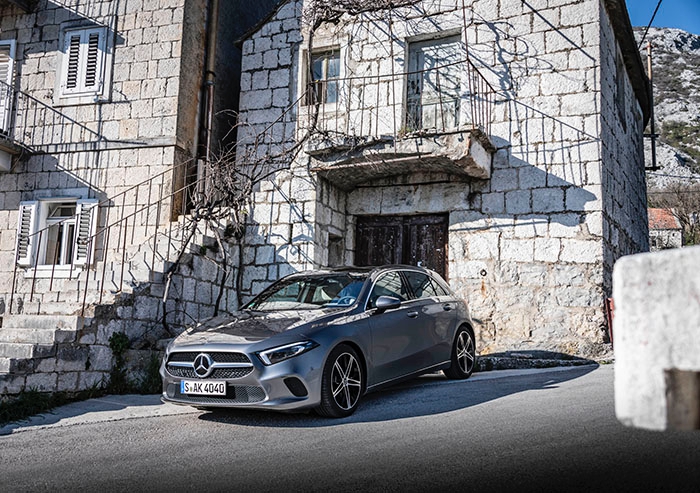 And yet they did, because the W201 was over-engineered (in a good way), and boasted quality and technical details derived from the larger cars Mercedes-Benz was more familiar with then. If you’re wondering what became of the 190 E, you need look no further than today’s C-Class... Those familiar with luxury marketing will appreciate it is easier for a brand already perceived to be at the top of its game to work its way “downstream”, as opposed to one lower downstream trying to make its way up – just look at the cheaper, ready-to-wear diffusion lines by Armani, Versace and other high-fashion maisons for example, which are big hits at the volume end of the spectrum – after all, high fashion isn’t for everyone (and their wallets). Besides, for every Lexus success story, there’s also VW’s foray into the big league with the Phaeton to consider. The original A-Class from 1997 – and its successor from 2004 – took on a somewhat frumpy, Smartcar-esque silhouette, a stark contrast to the edgy, sleek and sporty aesthetics of the current car and its immediate predecessor, the W176 – after all, people may want function, but they also expect style. Furthermore, what started out as just the A- and the B-Class in Merc's compact model range has expanded into a whole host of NGCCs, or New Generation Compact Cars, which includes GLA-, as well as the CLA-Class and its variants. Additionally, we’re told this latest modular platform that the W177 rides on will form the technical basis of at least a handful of new models in the compact range. The new car seems a mild evolution of the outgoing W176, but boasts a slippery 0.25Cd and wears the visage of the new CLS. Looks notwithstanding, a lot of the W177’s wow factor can only be experienced when you get in and drive, because the quality, tech and refinement blow its rivals out of the water. Mercedes-Benz isn’t just playing catch-up with this A-Class, it’s leapfrogged ahead of the game and set new standards for the genre altogether. The pedigree of the W177 is scrutinised closely, because it will set the stage for the brand’s other compact models, and eventually the more powerful AMG variants. The A 200 we sampled was a well-equipped example, with the gorgeous free-standing dual 10.25-inch display option. Bereft of an instrument shroud, the driver enjoys a light and airy cabin ambience that is none the poorer for information. The cabin’s focus is unabashedly on the technology, which should appeal to younger owners. The turbine-look air-vents look and feel good to operate, with an air of hand-hewn solidity to them that feels expensive. In fact, NVH levels over the poorly paved sections were never obtrusive, with a composure and pliancy to comfort and refinement that rivals larger cars. It’s clearly come of age as Mercedes-Benz infuses the W177 with the type of quality and fit that fans have come to expect from the brand – the A-Class now exudes the same over-engineered feel as the W201, something we never quite experienced in the earlier iterations. 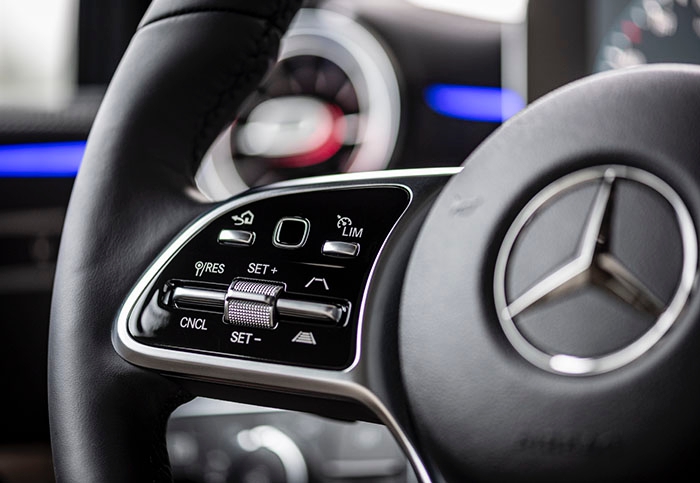 Apart from the big car quality, the A-Class also gets big car passive and active safety features, namely Intelligent Drive from the flagship S-Class, which can brake for both vehicles and pedestrians, amongst other functions. Tech-wise, the highlight is the brand’s MBUX (Mercedes-Benz User Experience) multimedia and connectivity system, which makes its debut in the A-Class. The best part is how seamlessly the technology works, with a combination of voice, touch or Comand control used to initiate interaction between the car and its occupants. After all, the last thing anyone wants is a frustrating experience trying to work the very technology that is supposed to help make things easier.

The trigger phrase is “Hey Mercedes”, and the omniscient ghost in the machine listens out for instructions; be warned, try to be funny and you’ll discover she’s got quite a sassy wit. The system is able to deal with both direct and indirect requests, and is able to pick up on different accents other than the generic German, American and British inflections, so we didn’t have to start hollering to make her turn the climate control down a notch. Although we sampled both A 200 and A 250, we especially liked the agile balance of the former, which is animated by a turbo’d 1.33-litre engine that delivers 163bhp/250Nm. It’s no hot-hatch by any stretch of the imagination, but is remarkably easy to pilot and an agreeable companion on both winding road and highway. It is more comfortable and cosseting than incisive, but the perky engine and planted chassis let you hustle it briskly through the twisties without breaking a sweat. The pace isn’t as quick as on the A 250 (224bhp/350Nm), but we like the A 200’s deft balance (it is also 70kg lighter than the A 250), which makes light work of any tarmac, since a commodious, comfortable cruiser is just what the doctor ordered for such a car. The platform can accommodate either a rear torsion beam set-up (as with the A 200 and A 180 d models), but the 4Matic and sportier models will feature a multi-link set-up. Like many of the French hatchbacks, Mercedes-Benz has calibrated the A 200’s rear torsion beam to deliver a ride composure that is pliant and well-controlled. We like how the new A-Class no longer feels like an afterthought in the line-up (or the runt of the litter, to put it more unkindly), as it boasts an impressive plethora of large limo mores in its portfolio.

It’s a fine return to form for Mercedes-Benz, especially with the latest A-Class embodying many of the virtues the brand has stood for for many enthusiasts, and this is certainly a theme we can live with. Like the Decepticons, there’s more to the Mercedes-AMG E63 S 4Matic+ than meets the eye. Remember the Mercedes-AMG One? It’s ready for high-speed tests! Ever thought the Mercedes-AMG G63 needed a bit more bling?