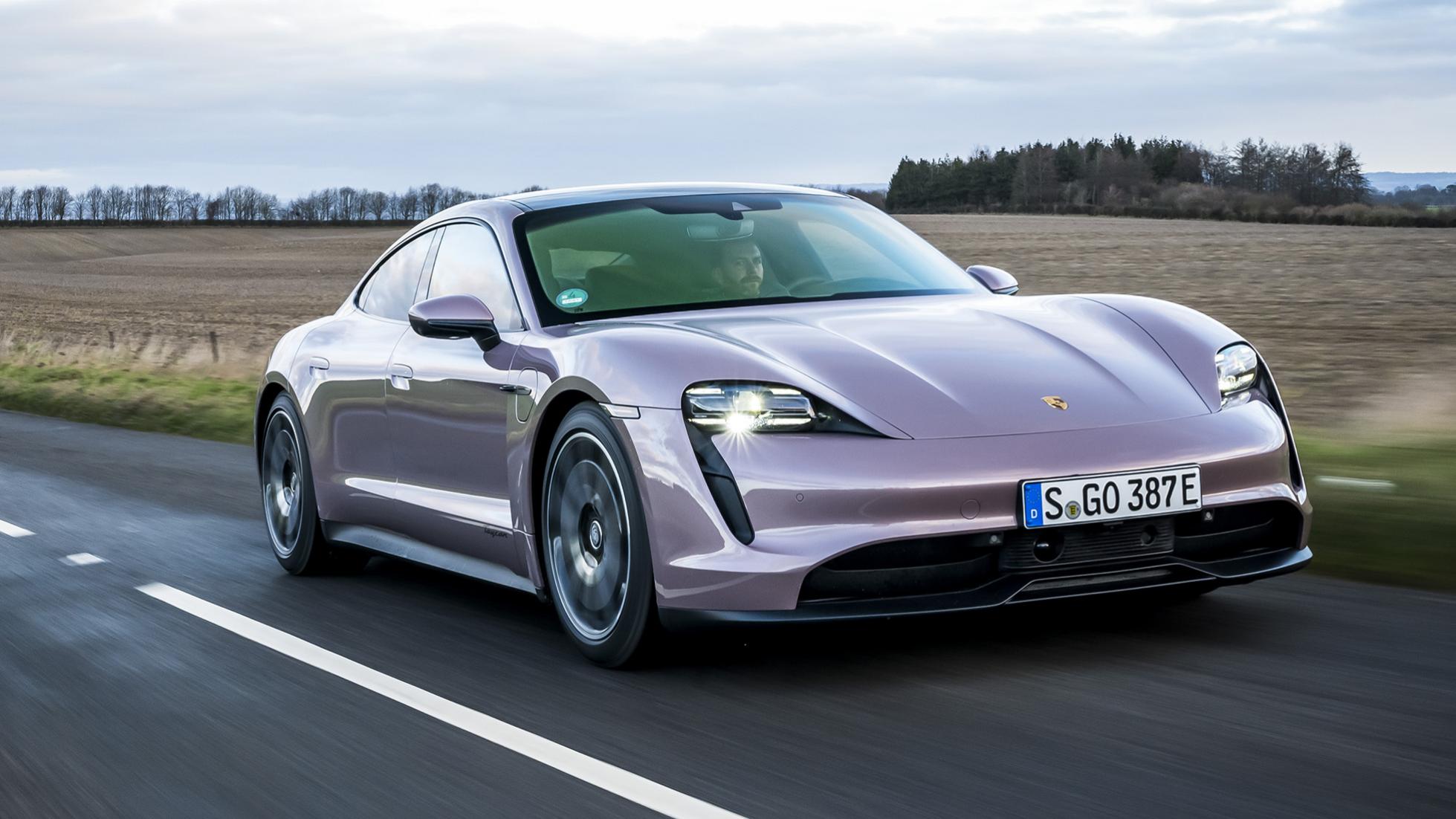 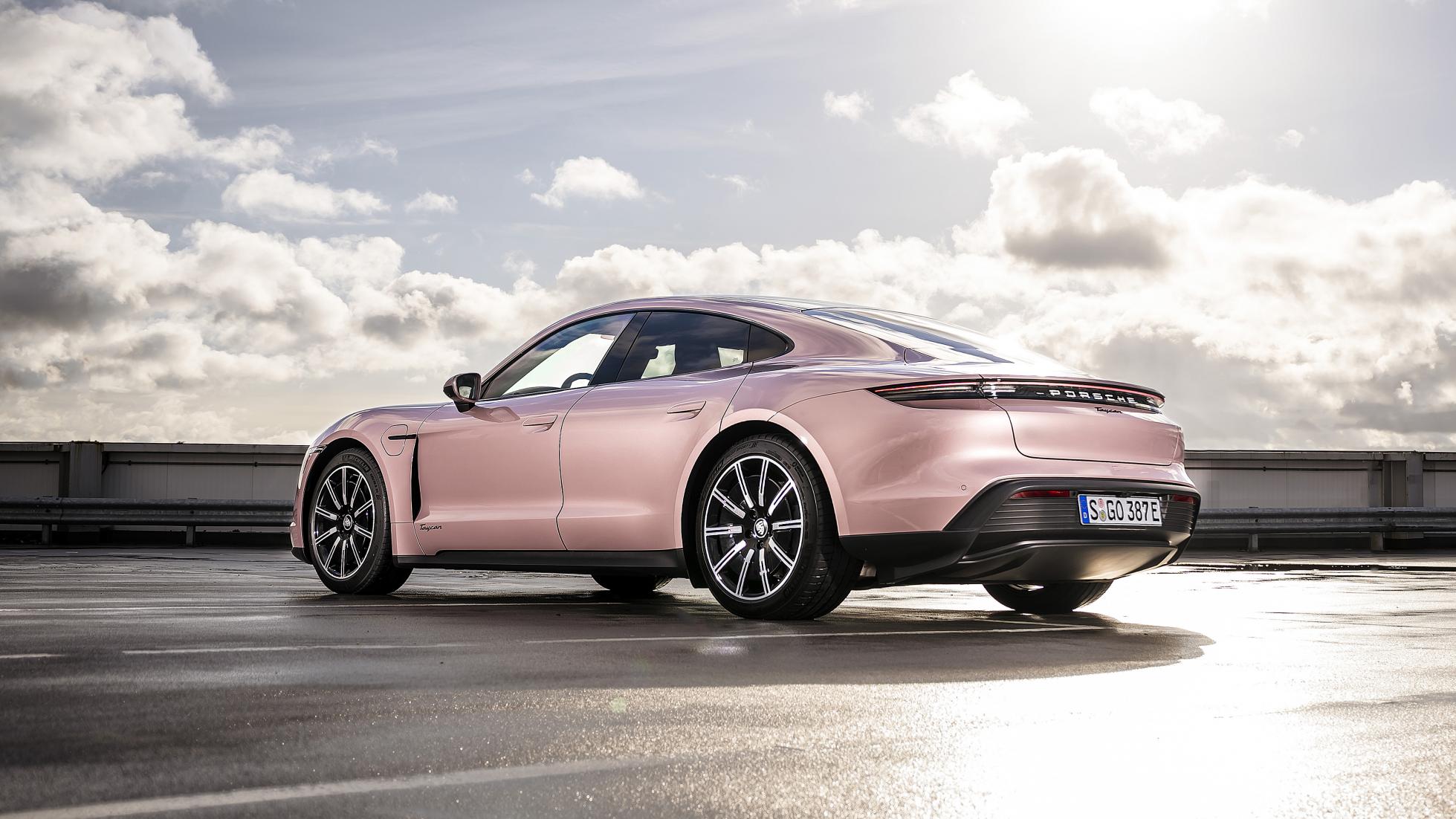 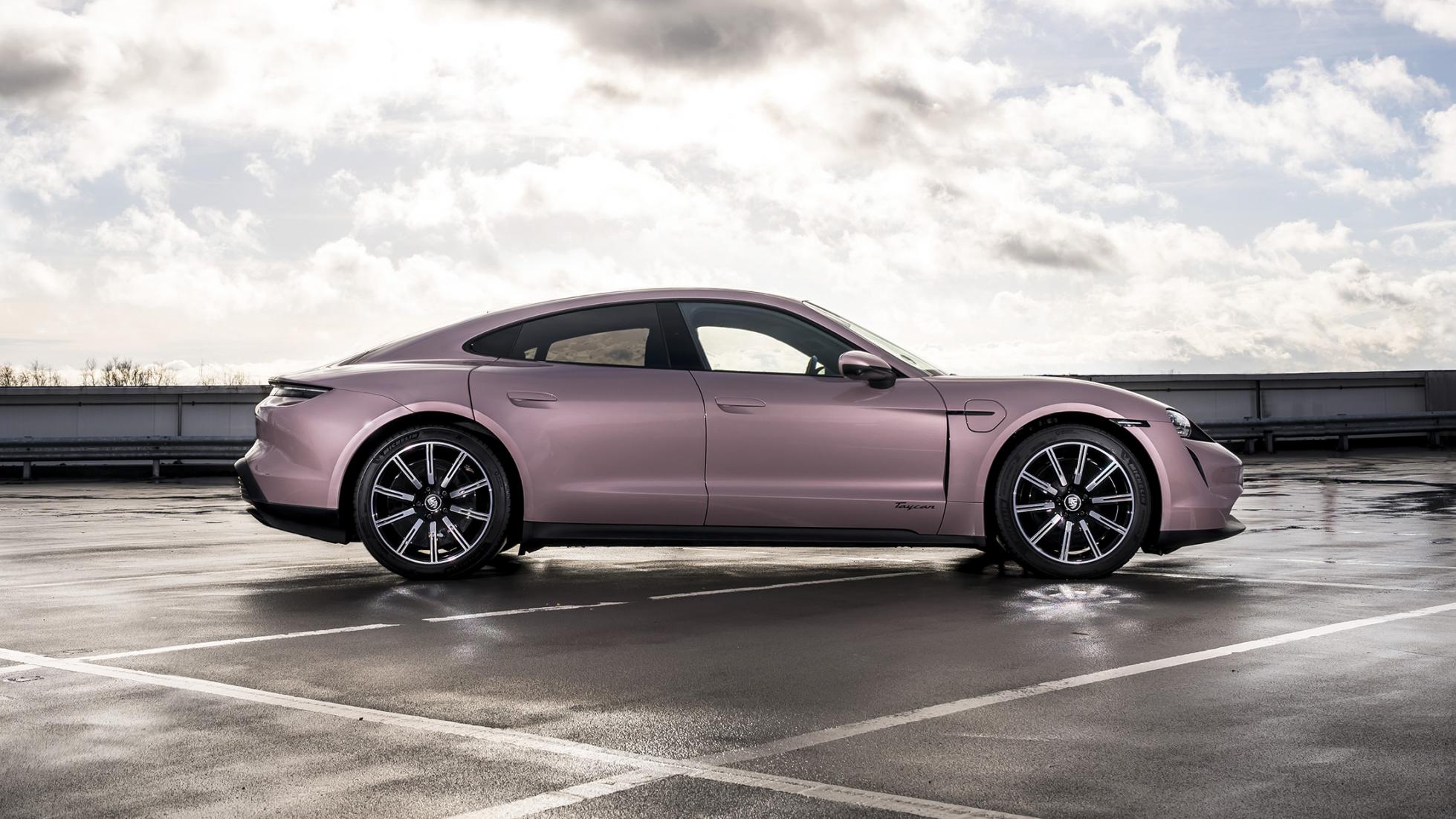 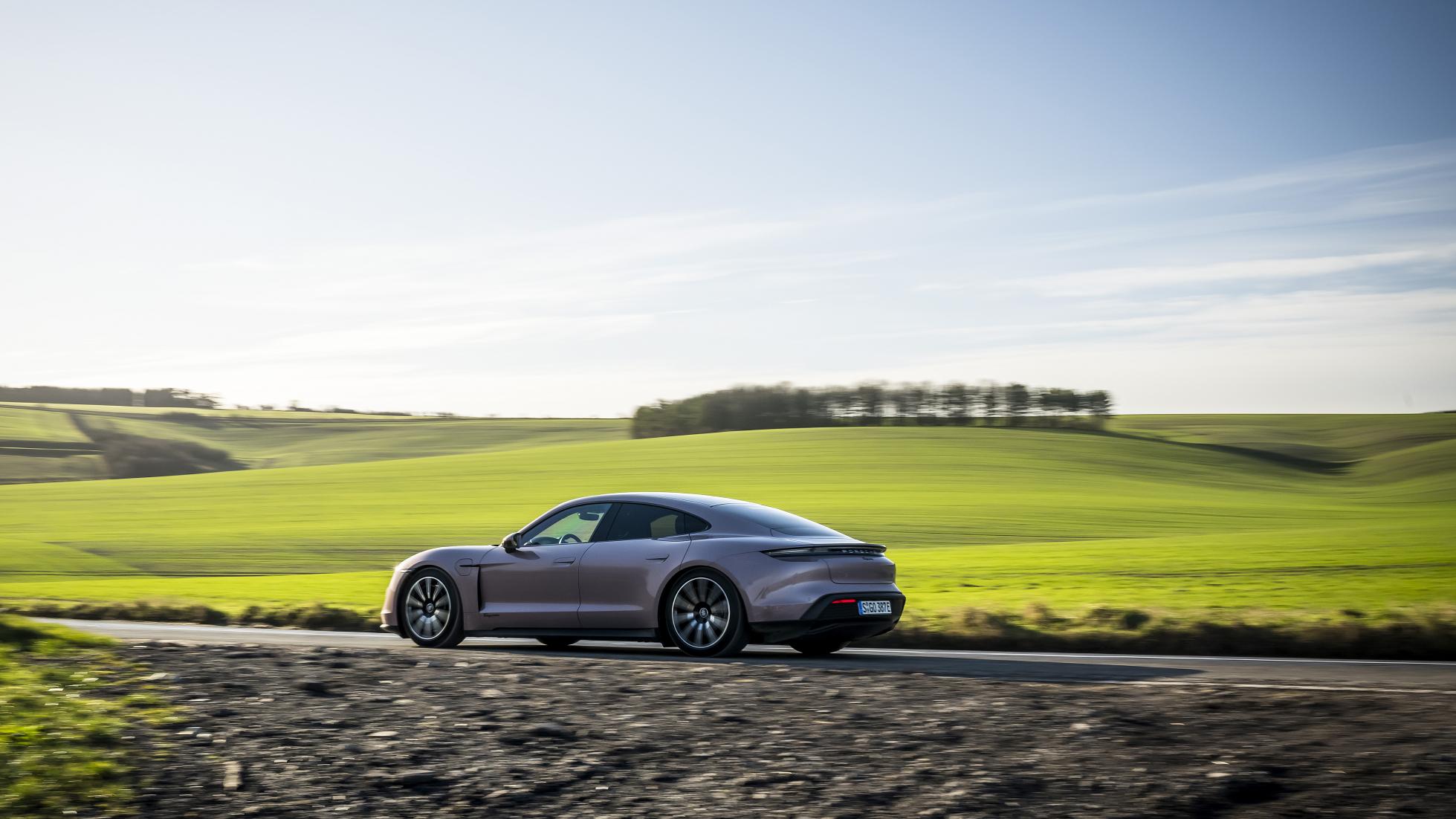 Porsche Taycan Review: Is Porsche's 'basic' EV the one to have?

An ‘entry-level’ S$340k (before options and COE) Porsche. I smell some Top Gear Consumer Advice incoming.

It’s the only flavour of Porsche’s electric fastback with no extra letters or words after its name – no ‘4S’ or ‘Turbo’ topper. This is as basic as the Taycan’s going to get, assuming there’s not a secret prototype with plastic bumpers and wind-down windows hiding in Stuttgart.

(Click HERE to read our First Drive of the Taycan 4S)

Officially, Porsche rates the car good for 325hp, but it ‘overboosts’ to 407hp when you flatten the throttle, and realistically you’re never going to be gunning the thing for long enough to feel the urgency drop off.

How many of these are actually going to cost under S$400k with COE?

And no, I don’t just mean S$2500 for a motorised charging port door that glides open with the slick precision of a Japanese toilet seat.

Porsche reckons Taycan buyers add 10-15 per cent onto the base price of their shiny new EV in extra garnish, tech, and features. Top of the list for S$23k, Porsche will sell you more range. The ‘Performance Battery Plus’ ups capacity from 79kWh to 93kWh, and claimed range leaps from 430km to a nice, round 485km.

I think folks mulling which Taycan to choose will look at those numbers, decide the rear-drive one is rapid enough, and ‘invest’ the saving in that bigger battery. Then they’ll get a pleasant surprise. The battery upgrade uncorks more power: 380hp as standard, with bursts of 475hp in Sport Plus mode.

That makes it much faster, I guess?

Actually… no. Both versions take 5.4 seconds to hit 100km/h, because the more powerful spec has to lug along a heavier battery. And that means the slowest Taycan takes twice as long as a Turbo S version do achieve the ol’ 0-100 sprint.

The G-forces merely tickle your tummy, instead of emptying it all over the dashboard – in the Normal mode at least. Crank things up to Sport Plus and it instantly morphs from ‘adequately brisk’ to ‘I hope that wasn’t a police car back there’. 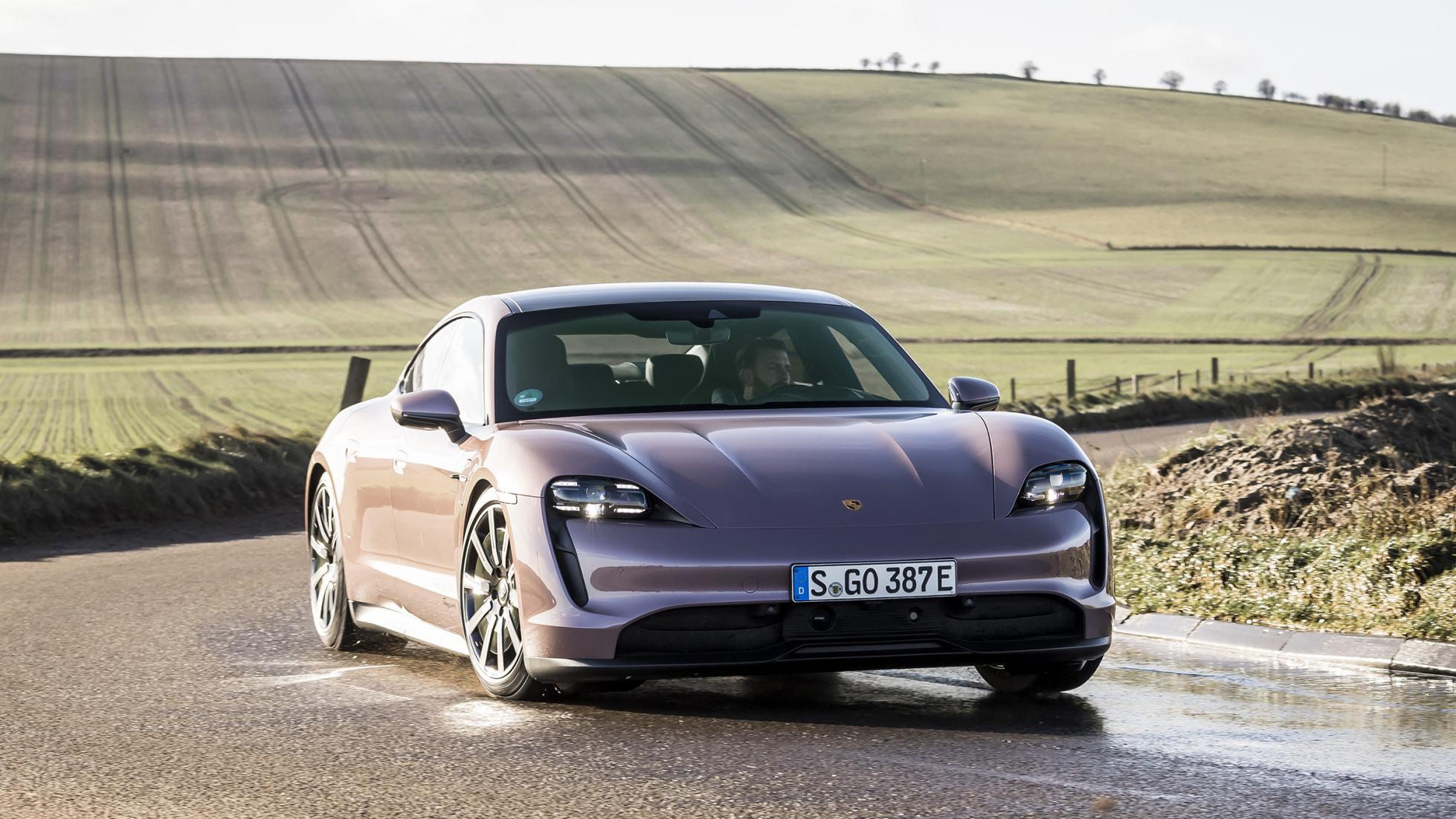 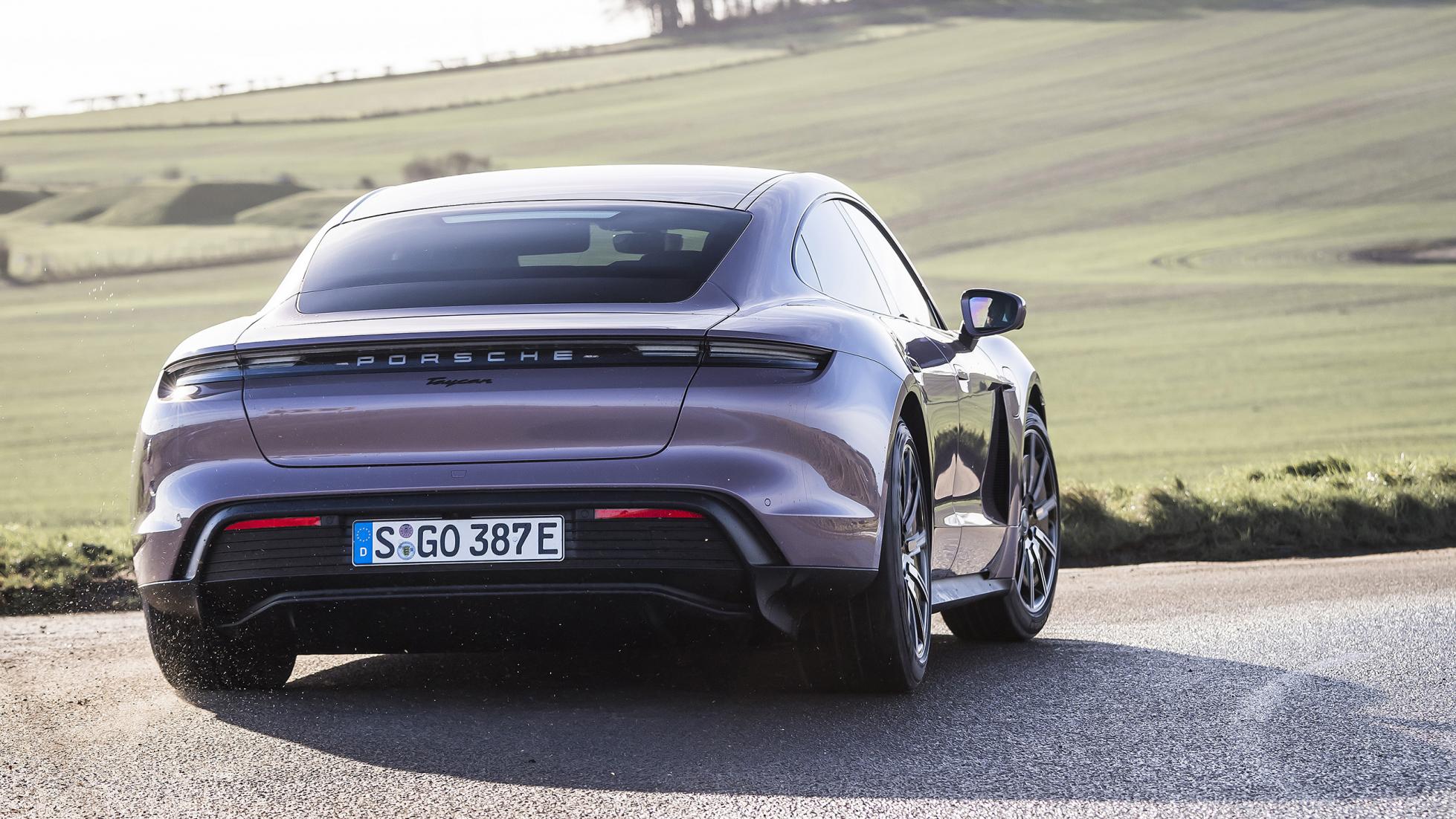 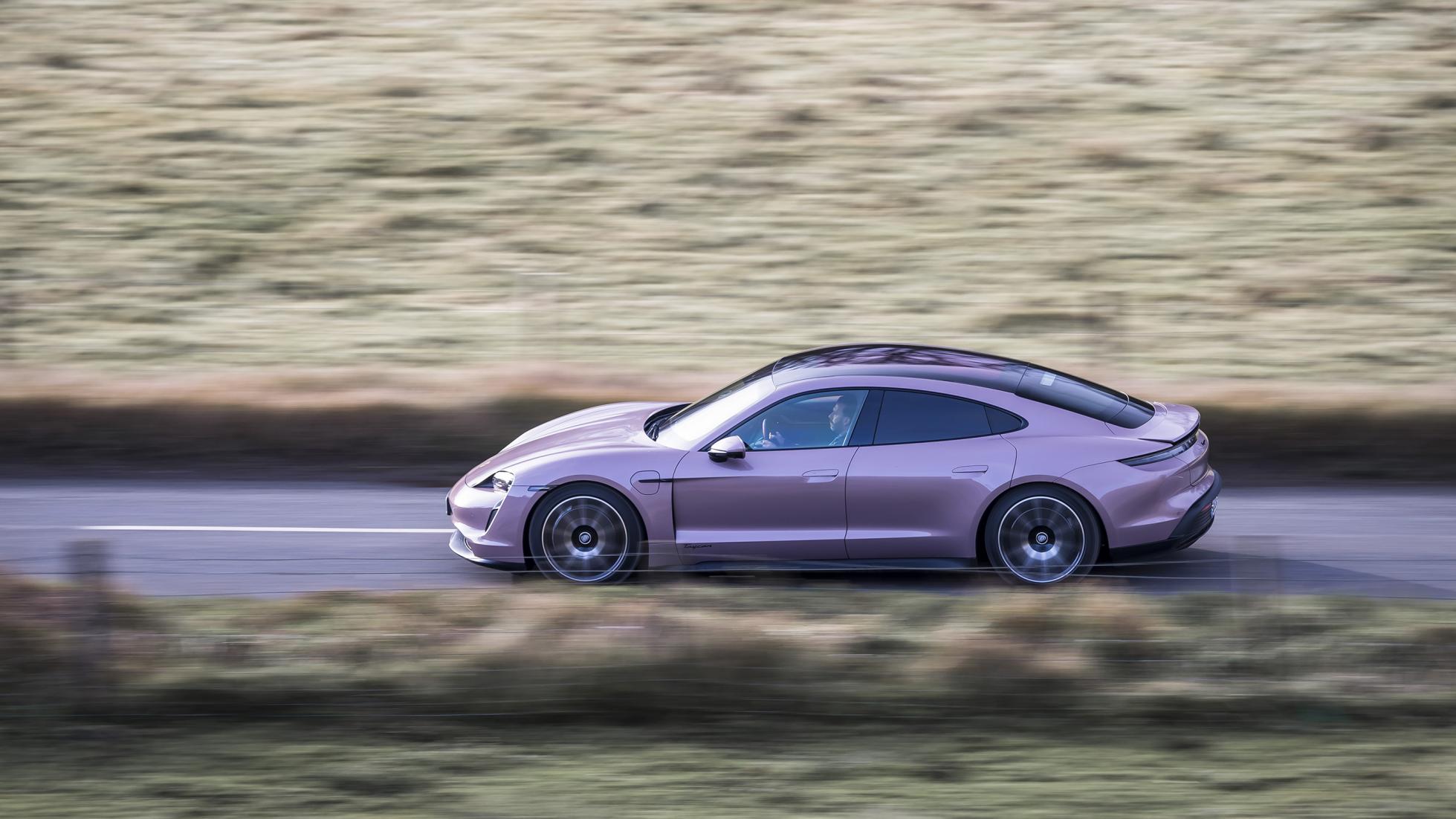 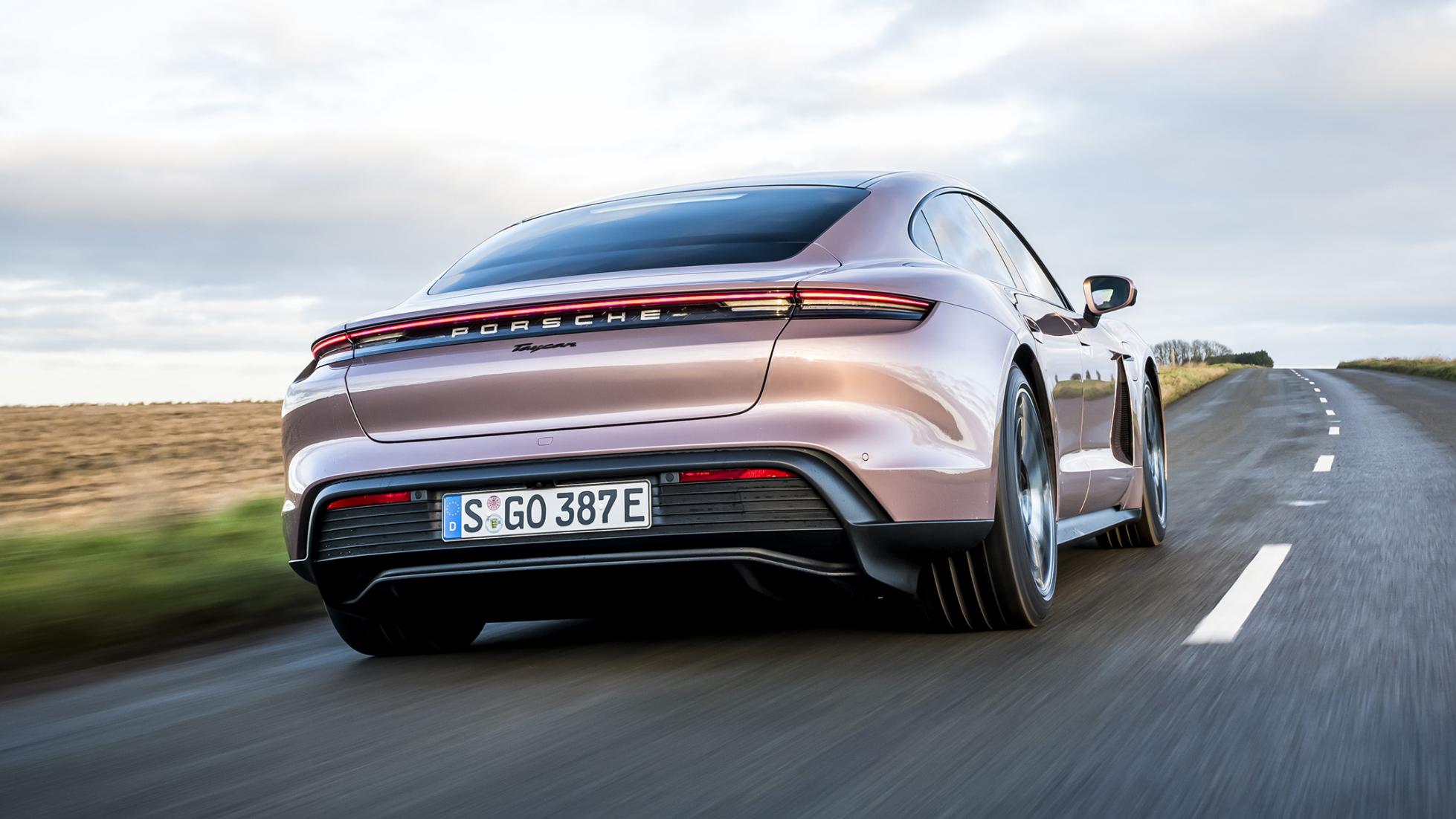 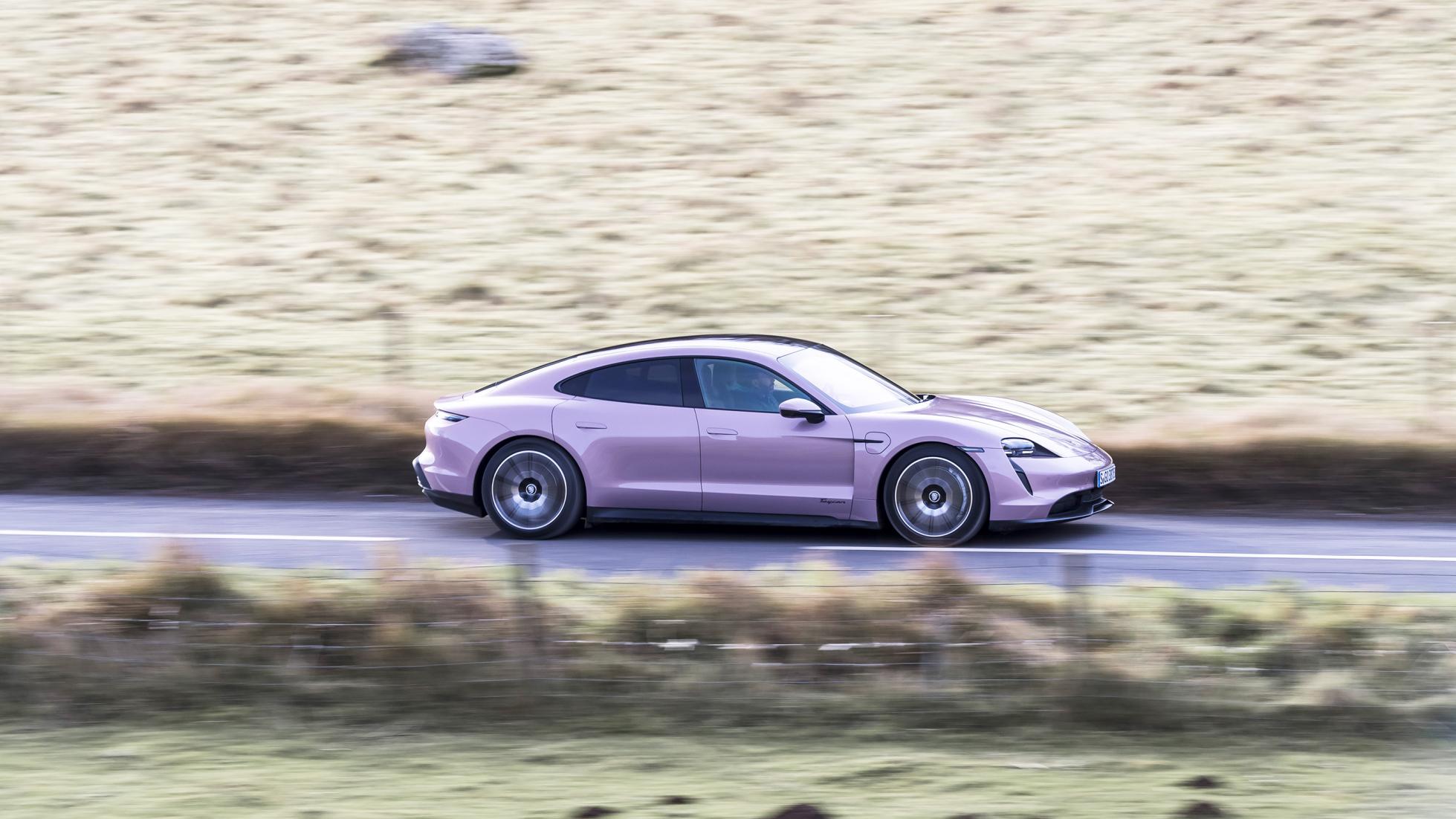 Bet it’s a bit gor-blimey-skiddy with all that torque and only rear-wheel drive?

Not so. Puts all its 640Nm down beautifully. ‘Course it should; it weighs as much as a Range Rover Sport. But if you’re talking yourself into ‘needing’ the 4S because you’re afraid of all that on-demand twist having a squirrelly interface with a damp roundabout, save yourself a few quid. Unless you live in a snow state, or you’re the heir to a ski-lift empire.

But EVs are all about turning your cheeks inside-out with rocket-sled acceleration, no?

I preferred all-out acceleration in the Taycan to going horizon-chasing in the Turbo S. You’ve got all the surging insta-punch you could ever ask for, but it happens more smoothly.

Acceleration here is a languid squeeeeeeze, not a couple of savage neck-snapping jabs before you’re jumping two-footed onto the brake pedal to restrain 2.1 tonnes of lithium and leather.

I think you’ll find a Tesla Model S Long Range Plus does 0-95 in 3.7 seconds and claims over 640km of range. Case closed.

Can’t argue with that. No-one, not even Porsche, has an answer for Tesla’s raw specs right now. But Tesla, I think you’ll find, hasn’t got anything close to the sheer handling talent or rich interior quality of Porsche’s electric four-door.

What I’m saying is, don’t write the Taycan off purely based on a soulless Microsoft Excel spreadsheet. Not if you like cars more than you fetishize numbers.

Shots fired. So, what’s it like to drive the slowest, cheapest electric Porsche?

Not a slow, nor a cheap-feeling experience. This test car had the Performance Battery Plus, and declared itself fit for a 330km range having preconditioned the cabin just-so on a frigid January morning.

165km later, having been mercilessly flung down many B-roads, imperiously cruised along motorways at outside-lane speeds and threaded through several towns, the readout declared 160km-worth was left, with power consumption running at an impressive 3.7km per kWh.

That’s your low-end, worst case scenario. My helium-footed colleague Tom Harrison borrowed the Taycan 4S over Christmas and got 4.3km per kWh without much effort, even in the bleak midwinter. Real-world, this is a 400km car. 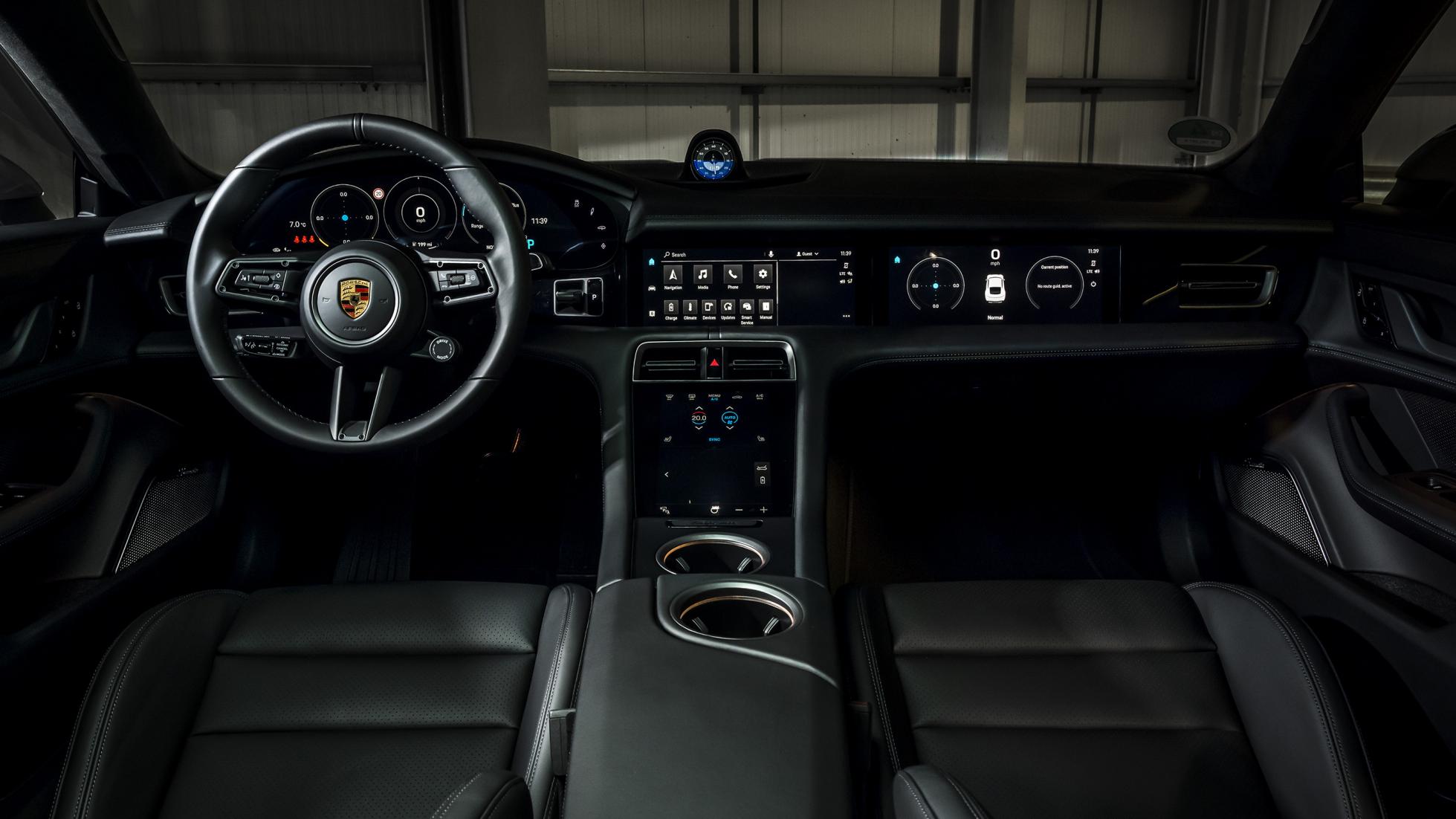 I said what’s it like to drive, not how squeaky-bum is the range…

I’ve driven the slowest Taycan and the fastest one and you know what? I prefer this one to the Turbo S.

The steering, now uncorrupted by any torque flowing through the front axle, is standout – if I was blindfolded and a flat-six backing track was played though the hi-fi I’d have sworn it was a rear-drive 911 Carrera. The weighting, the turn-in, the feedback – it’s all world-class. Steering like this makes a car feel well-engineered and expensive all on its own.

So’s the ride, the body control, and the balance. Although this base model is the only Taycan to ride on steel springs as standard, the test car had cheekily optioned in air suspension. Worth the investment? Can’t say without a back-to-back test, but the adaptive system is gorgeously supple when you want to relax yet disciplined if you’re cracking on.

The brakes remain a slight bugbear – they’re not quite as natural as ‘analogue’ stopping, but Porsche has nailed the re-gen pedal response better than anyone yet. The engineers say a heap of calibration work’s been lavished on this rear-drive car, which no longer has a front motor to act as generator when you slam on the anchors.

Reckon this is the Taycan to have?

At S$364k for the bigger battery and a few bits and bobs inside (but before COE and the nice options), no other electric car offers this much quality and such a complete, enjoyable drive. An Audi e-tron, Jaguar I-Pace or Assorted Teslas can offer you more space – or a lot more range – but if you want an EV that’s more than just numberwang, nothing’s this complete.

There’s something else too. The newest Porsche, and the most tricky for the purists to make friends with, now shares a common piece of family folklore with the iconic, evergreen 911.

With both cars, it’s pretty tricky (though not impossible) to buy a bad one. But just as we stagger out of a ballistic 911 Turbo S and find ourselves craving the simpler pleasures of a regular Carrera, the lowest-priced, slowest Taycan is all the electric Porsche you need. The 718 Cayman GT4 RS is a big ‘party’ before Boxster and Cayman maybe, possibly gets electrificationings