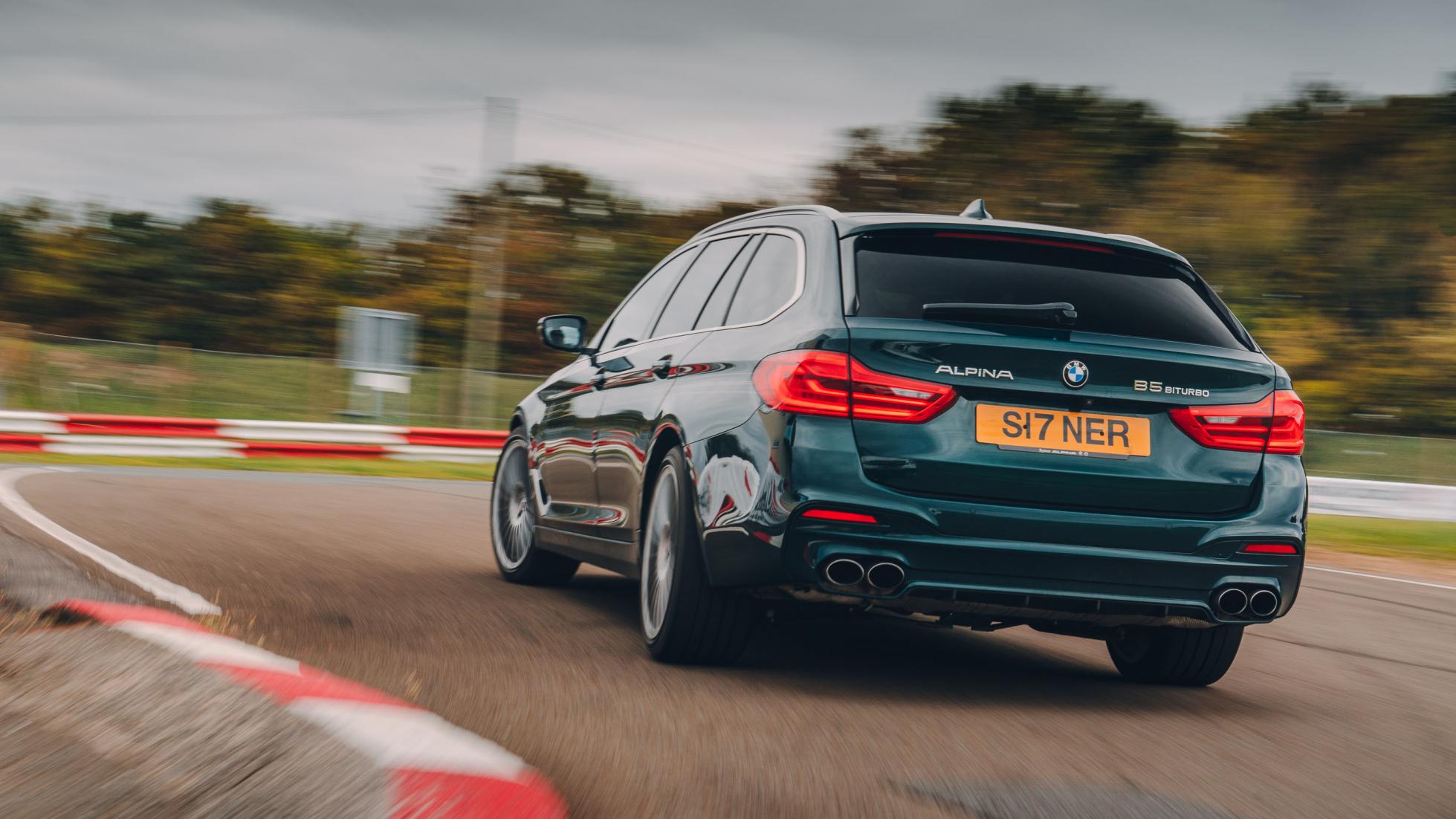 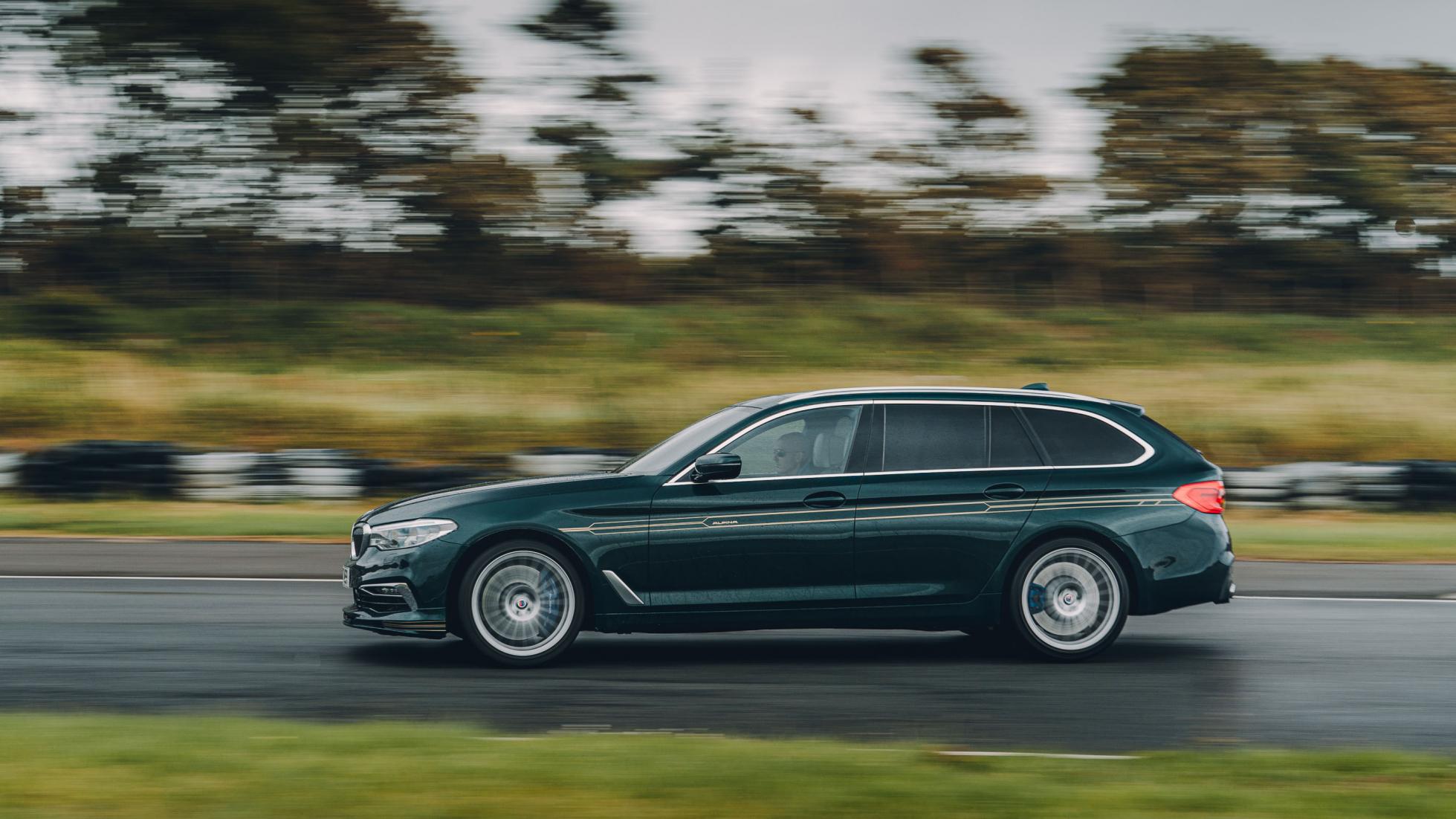 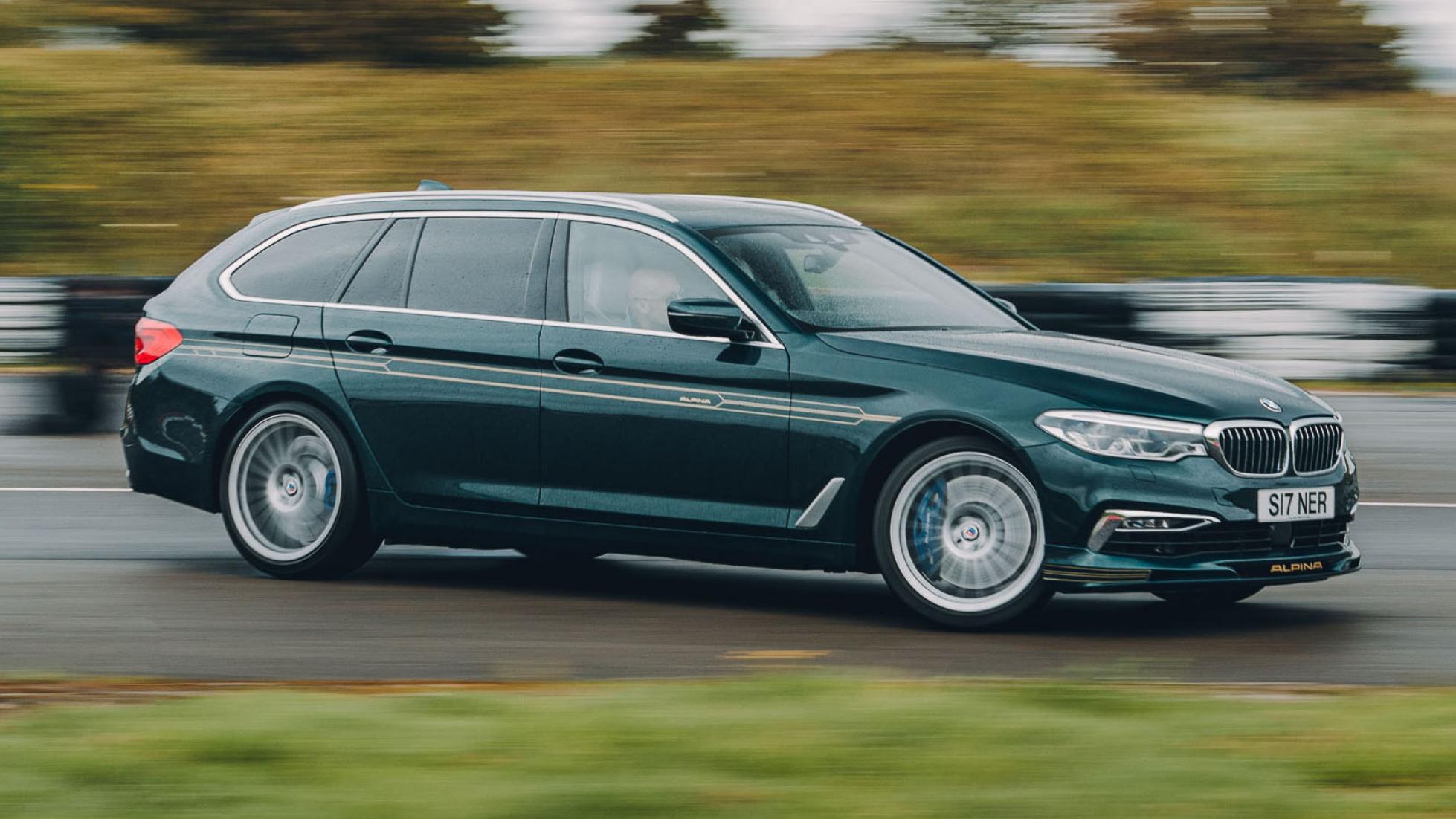 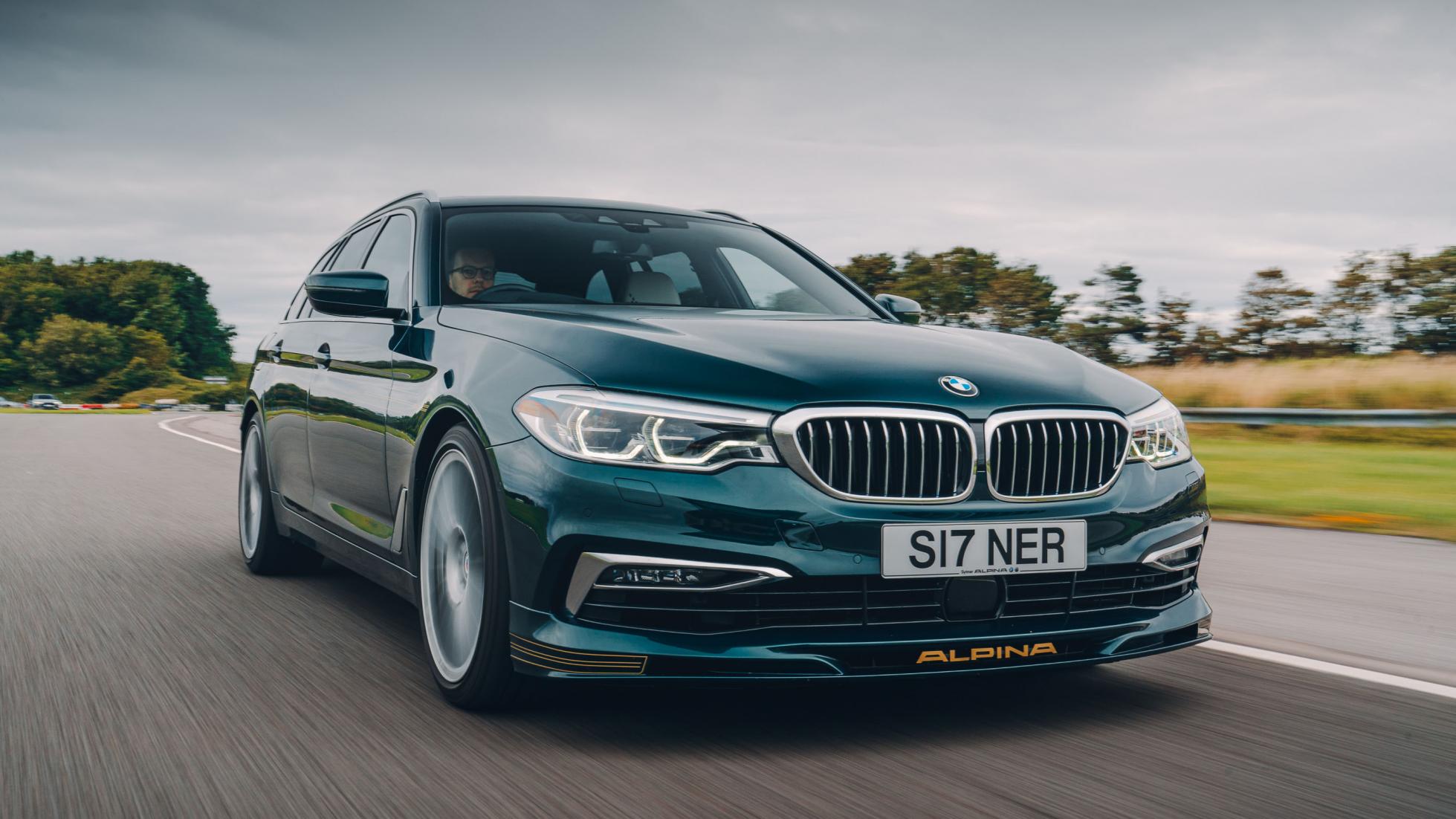 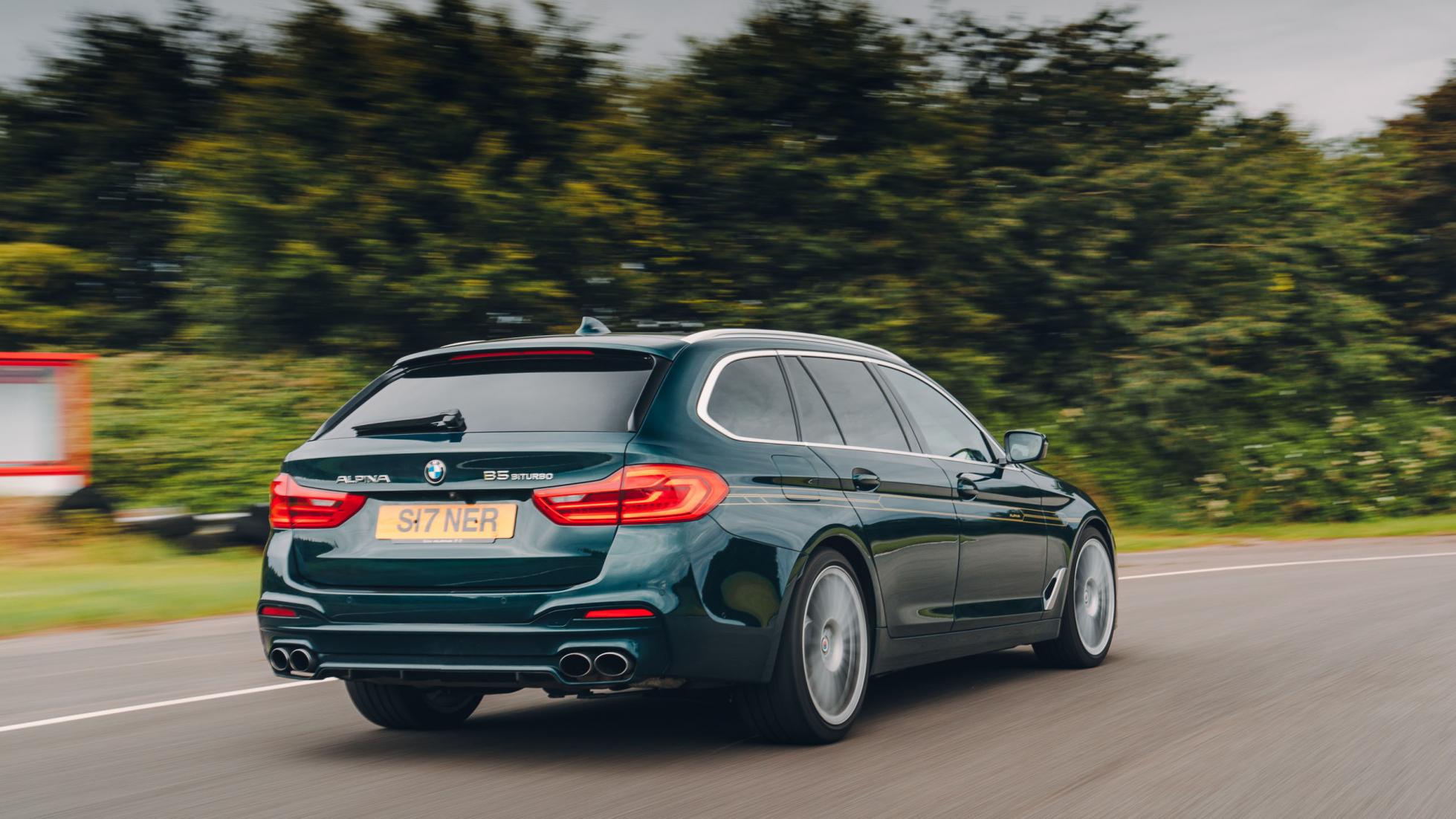 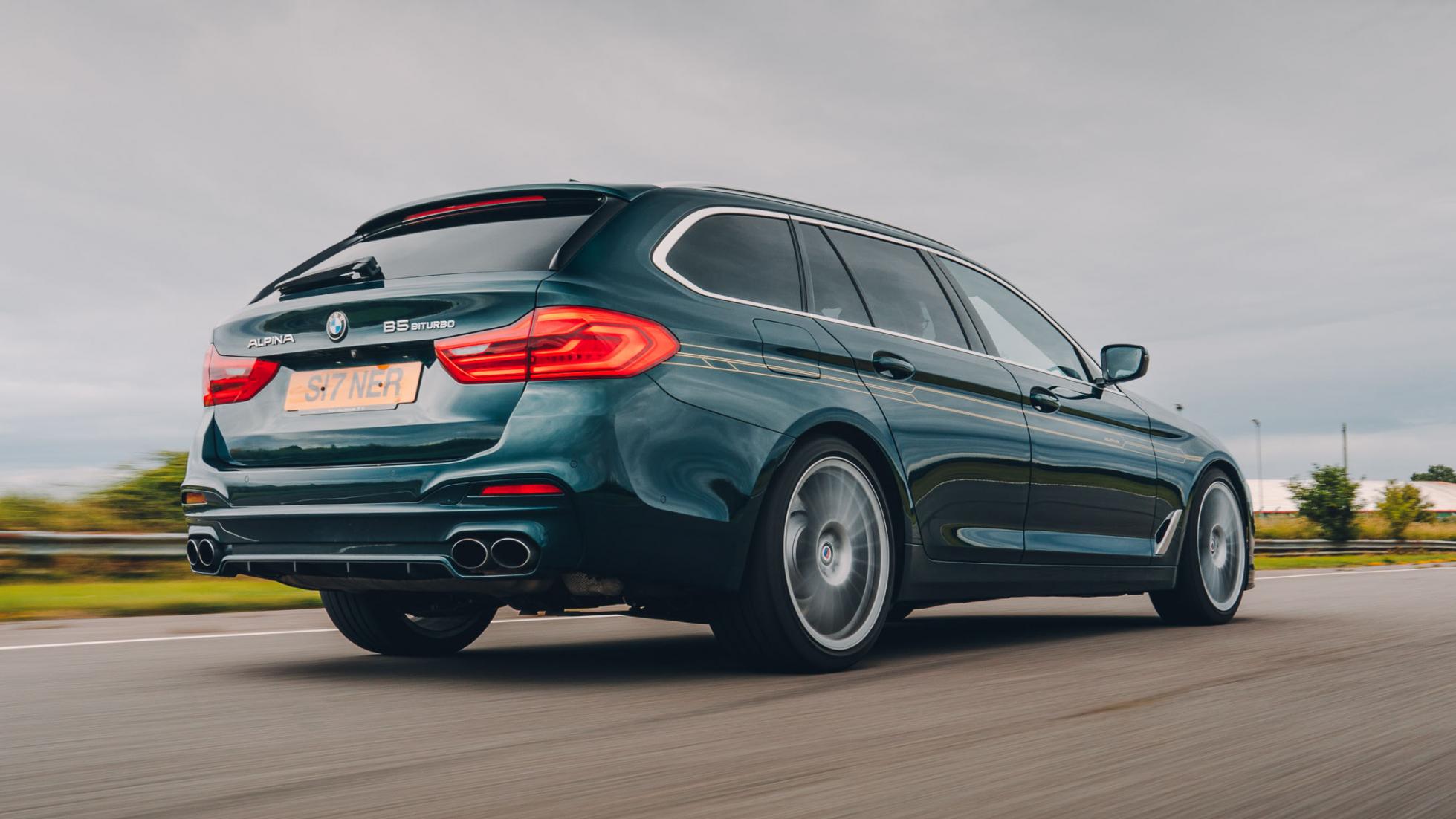 Because it’s painted green and has gold stripes?

That’s a matter of taste. This is a delightfully Seventies spec, and as we know, fast cars are elevated to a higher plane of cool when painted verdant green. Whether it’s a 911 Turbo, Lamborghini Aventador or particularly a front-engined Ferrari, even the most thrusting, hopelessly vulgar machine becomes sub-zero when it’s daubed the colour of a wine bottle.

What about all the gold highlights?

Of course, you can (and should) de-badge the huge BITURBO lettering on the tailgate. But there’s still the gigantic chromed quad tailpipes, 20-inch multispoke wheels and brake calipers like baguettes.

I drove around in this Alpina for a week and was left in no doubt that anyone who could tell a 3 Series from a 3-piece suite was only too aware this is a Very Fast Estate Car. Which was momentarily bothersome, as the 4.4-litre V8 filled its turbocharged lungs with summer air. And then it was gone.

Plenty of poke then?

‘Ample’, you might say, To make a B5, Alpina takes a BMW M550i and lavishes it with a bigger intake, stronger pistons, and new twin-scroll turbos. Two of ‘em. Because this generates huge heat, the engineers plumb in a new intercooler and extra radiators. An Alpina is the full works, not an ECU reflash and a lick of paint.

Off the line, this whispering super-barge rears up its nose like a speedboat and hurls itself from 0-100km/h in 3.5 seconds. The top speed, according to autobahn fanatics, is 325 kilometres an hour.

By any stretch, that’s hugely fast. It’ll keep an M5 Competition honest, and give some entry-level supercars a real fright. But raw ‘watch this’ pace isn’t the point of this car. 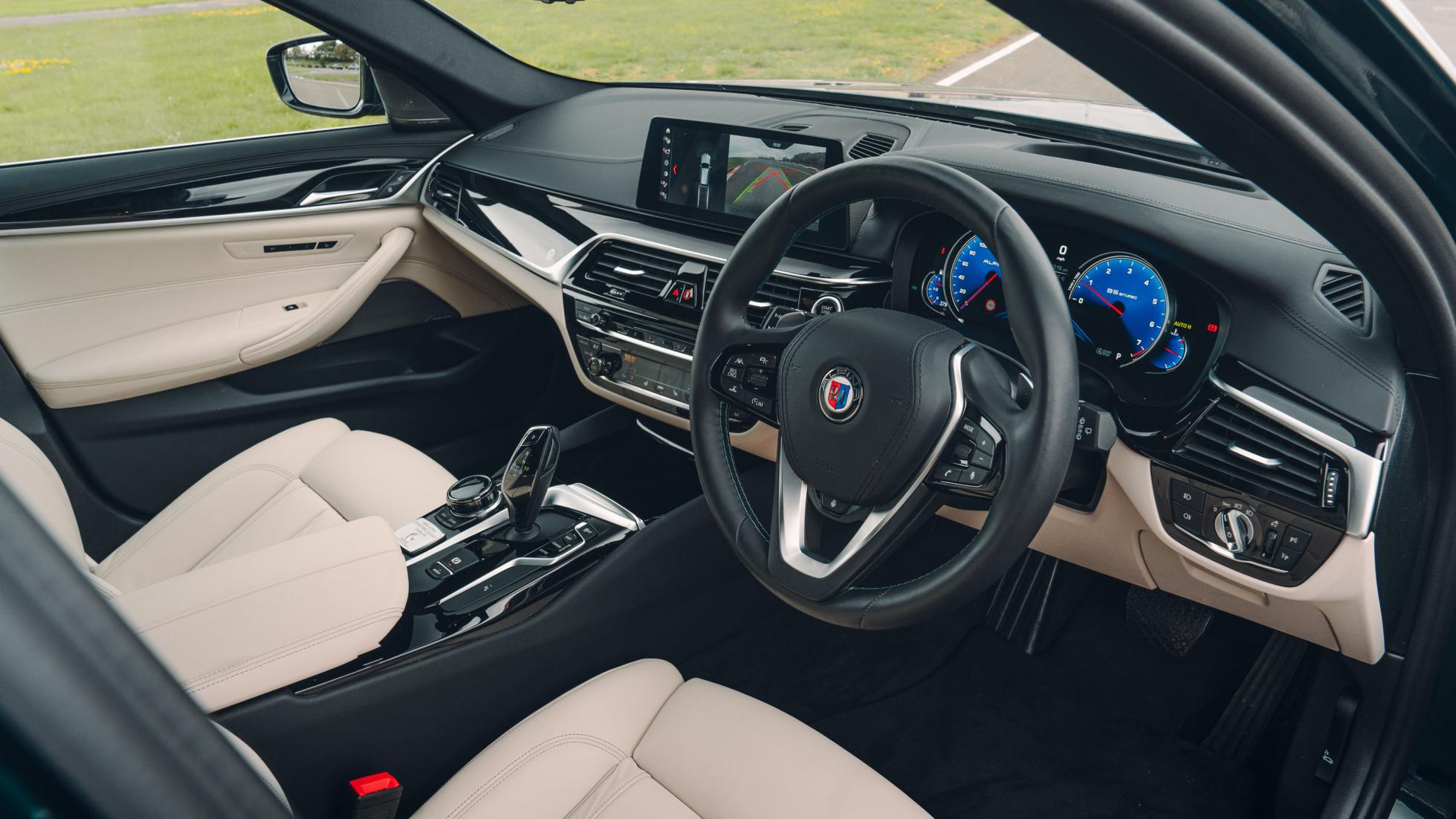 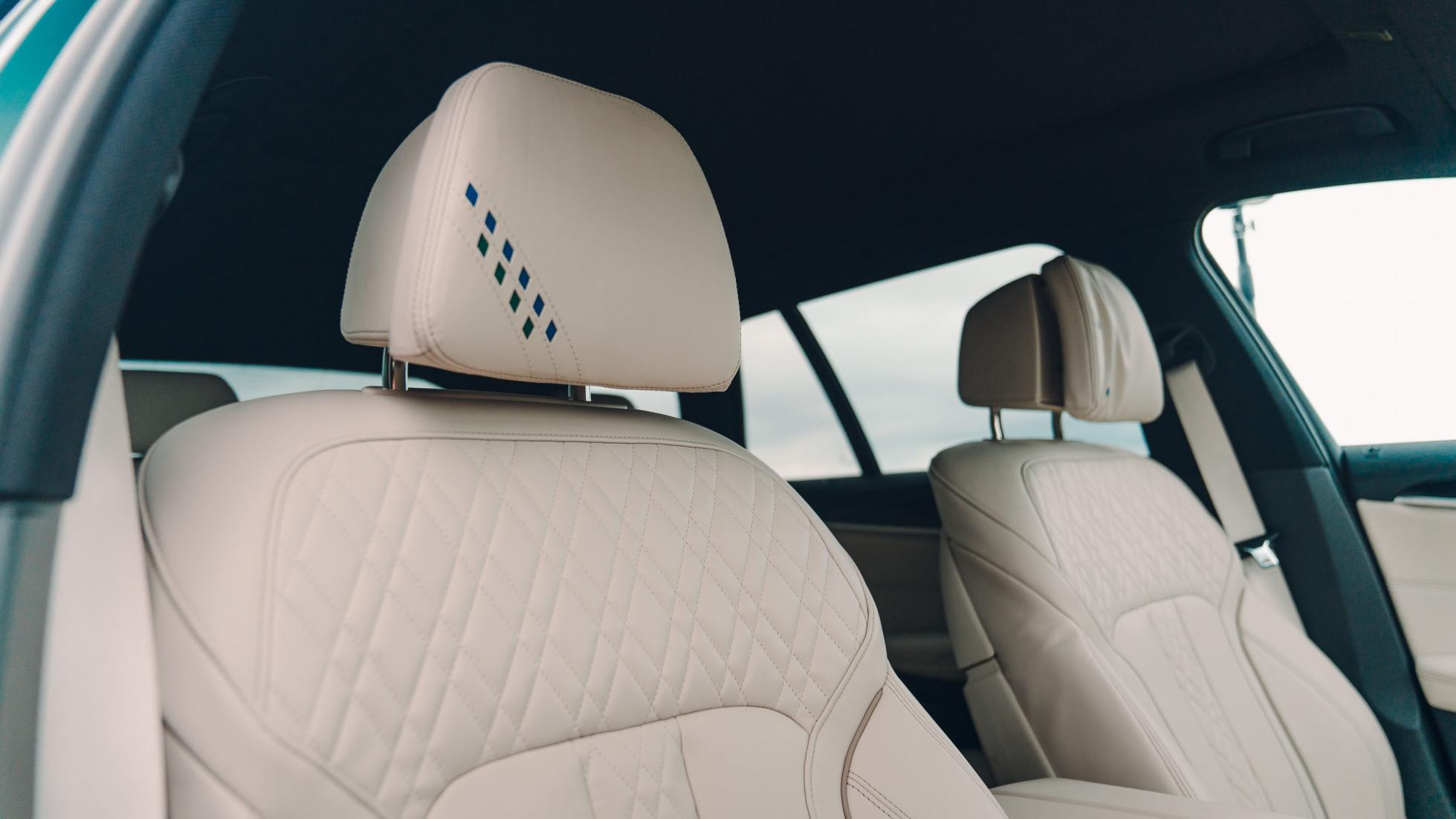 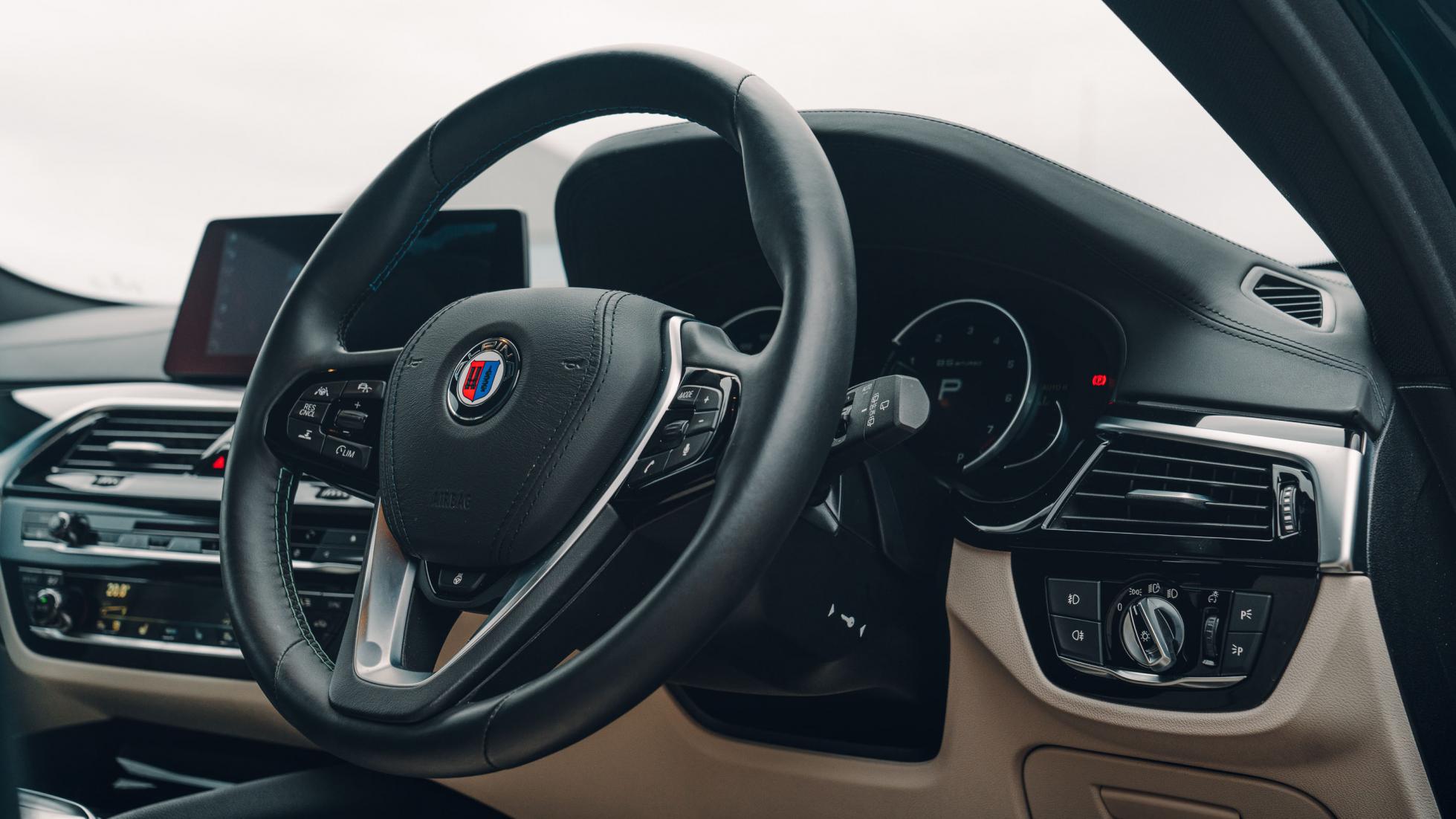 So what exactly is the point?

It’s the velvety manner in which that performance is delivered. This is a supremely comfortable barge, and it’s the combination of M5 speed (without the harsh head-thwack against the headrest) and near-Rolls-Royce Phantom comfort that’s utterly beguiling.

Alpina lovingly reworks BMW’s adjustable dampers, so while there’s Sport and Sport Plus settings to keep all 2.1 tonnes in check, the car has bandwidth in the other direction. A Comfort Plus mode, for maximum waft. Around town, it’s joyously absorbent. On a motorway cruise, it’s uncannily plush. If you lived with one of these every day you would cease to remember why everyone complains so much about Britain’s badly maintained roads.

The sweet spot is actually the clever Adaptive mode. Yep, it’s a rare case of The Car Knows Best. Press that button and the car constantly monitors your throttle, steering, speed and what sort of road you’re on to keep the dampers in at the right level of squidge. It’s never agile – it’s simply too big for that – but having such deep reserves of effortless power on tap while being so cossetted from the outside world is a truly splendid experience.

Is it a true super-estate?

Not if you drool over cars that cheat physics. The usual German rivals are sharper, more responsive, more aggressive and biddable. They wouldn’t feel out of place on a track day, or at the Nürburgring.

The B5 doesn’t tingle with feedback or dare you to hurl it about. If you want a 600hp missile that happens to have room for your dog, this isn’t your kind of car. Buy an E63, or an RS6. But if you want a very spacious, comfortable motorway express that just happens to have 600 horsepower, then read on.

Is this a super-wagon for the, ahem, older folks among us?

Perhaps, but I’m not yet thirty and I still found plenty to love in the B5. Take the eight-speed gearbox. Again, Alpina’s tuned it to its liking, and at last we have a modern car with eight ratios which isn’t obsessed with only using two of them – first to start, then straight into top gear to save fuel.

The Alpina imperceptibly swaps gears to keep the turbos on the boil, never jerking the occupants, remaining slap bang in the bullseye of boost. It’s wonderfully elastic. Acceleration is effortless. Everything about this car just feels deeply unstressed. Even the noise is a distant rolling thunder, rather than a lightning bolt straight in your ear. Nothing is trying too hard to impress, apart from the stripes.

Would I be better off just having a 5 Series diesel? They’re pretty quick.

If you’re being truly sensible, then yes. But this Alpina is the most unhinged sensible car money can buy.

If you’re really going for it, then it’s not as pointy as an E63 or an M5, but look at it this way: in a 2100kg ultra-express like this, how often are you going fully flat out down a B-road, and how often are you simply cruising at speed? The other ninety-five per cent of the time, the Alpina will be so much less overbearing.

On the motorway, the B5 happily cruises at 9.1l/100km. Give it some stick and that’ll drop into the 11s. So, it’ll easily saunter to 700km on a tank, while you settle into the fabulously supple massage seat, admire the quality of Alpina’s stitching and inhale the rich pong of its luxuriant leathers. It’s so tastefully finished inside, and spacious to boot – why would anyone need a 7 Series? You still get BMW’s split tailgate, though the boot is smaller than an E-class’s Space Shuttle load bay.

This is one of those ‘all the car you ever need’ contenders?

It could very well be the definitive all-the-car-you-ever need – so long as you truly commit to not being interested in lap times or cartoon handling.

What I love most is it’s so refreshingly mature. Cars that feel like they’ve been set up by engineers – not the blue-sky marketing team – are getting rarer, but this is one of them.

There’s no rear-drive mode for the 4x4 system – it just sends 90 per cent of drive to the back, because that’s enough to give it a sportisch balance. It doesn’t do pops or bangs. You can’t muck about with the gearshift ferocity and there are no yucky illuminated M badges in the seats, like you get in M3s and M5s. It won’t get as many Instagram likes as a hulking RS6, but I’d bet every penny of its weighty price it’ll be nicer to live with.

Yes, it's a lot of money. And this particular car is the pre-facelift B5 BiTurbo (it’s actually just been treated to some new lights, bumpers and dashboard tweaks). But nothing that’ll spoil the fundamental character of this serenely fast and versatile hero. Sad BMW doesn’t build an M5 Touring any more? Don’t be. An Alpina should be an alternative choice – a hidden gem – and the B5 is just that. The Nissan Ariya is a big EV with 500km of range Aye for an i : Top Gear Singapore Talks to Dr. Alexander Kotouc Most powerful ever BMW M8 is now even more powerful. How does 823hp sound?