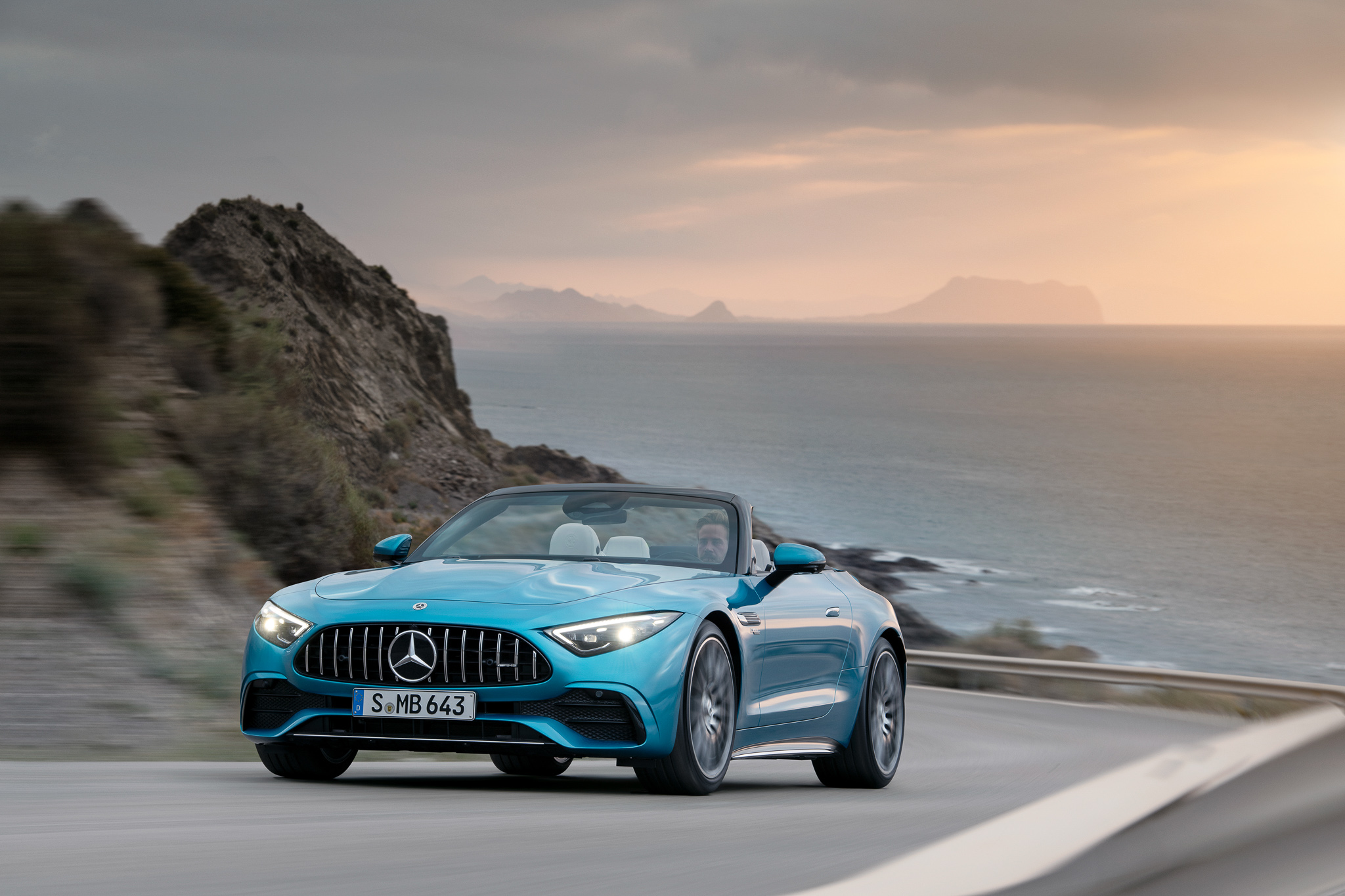 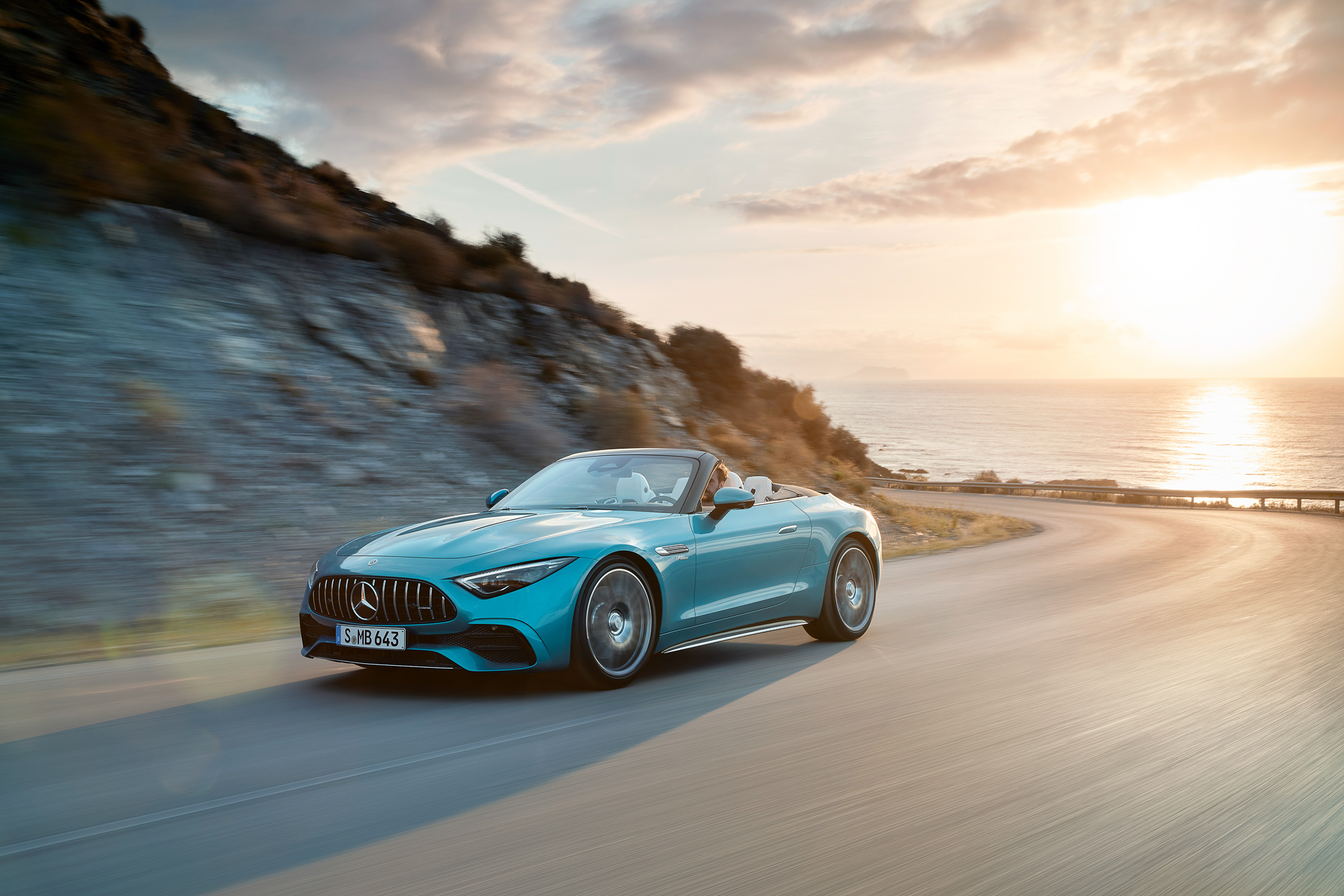 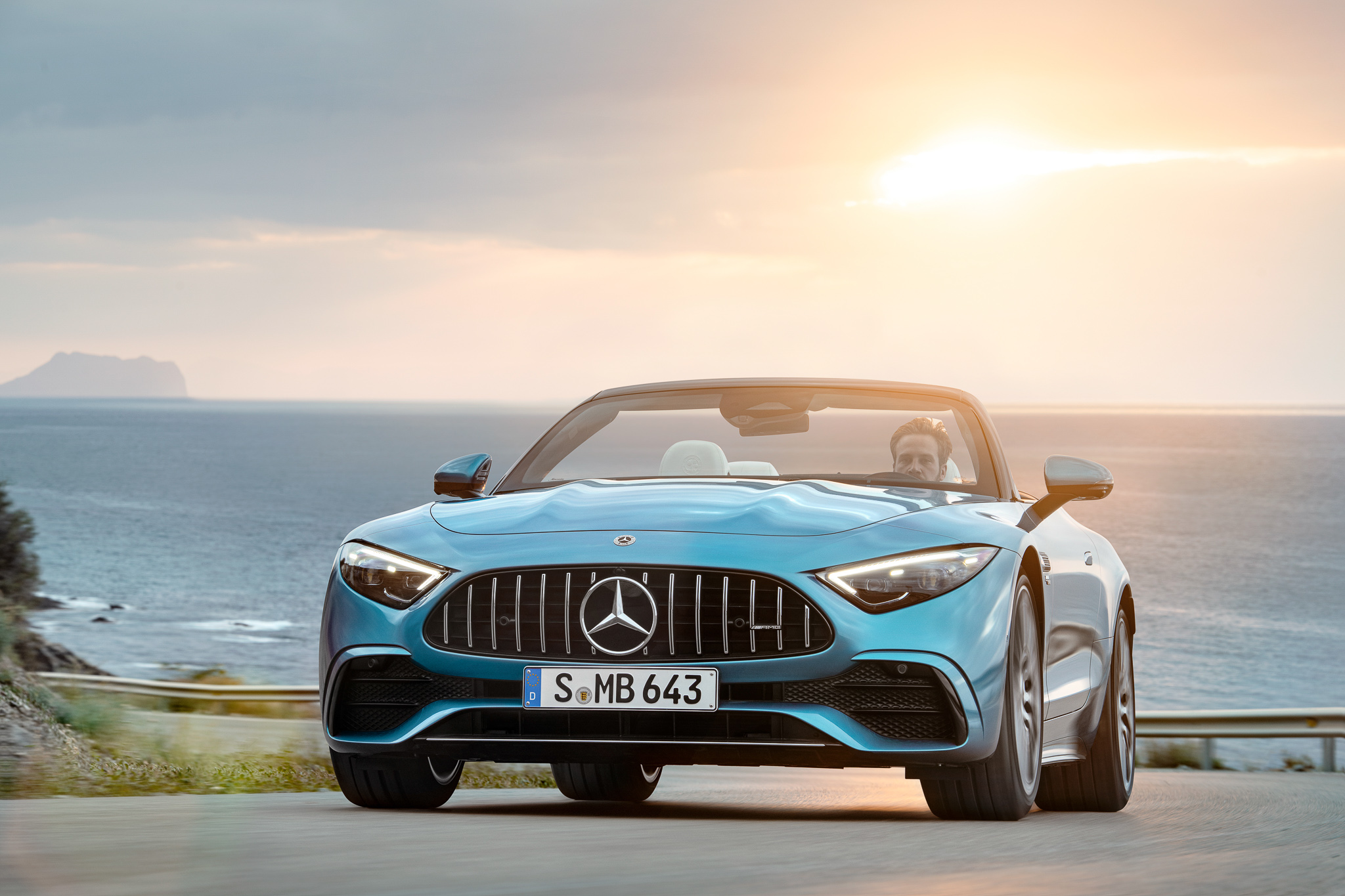 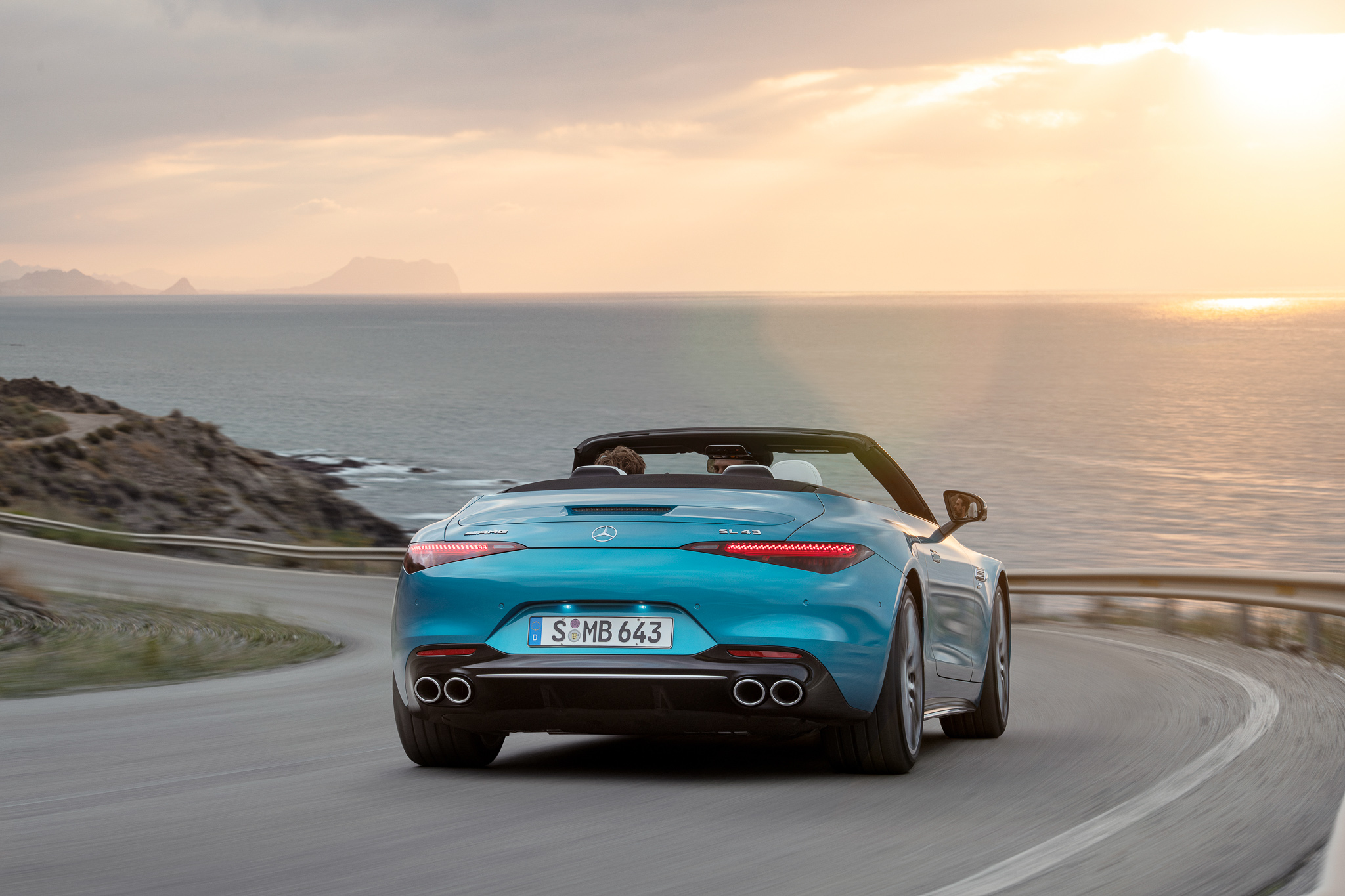 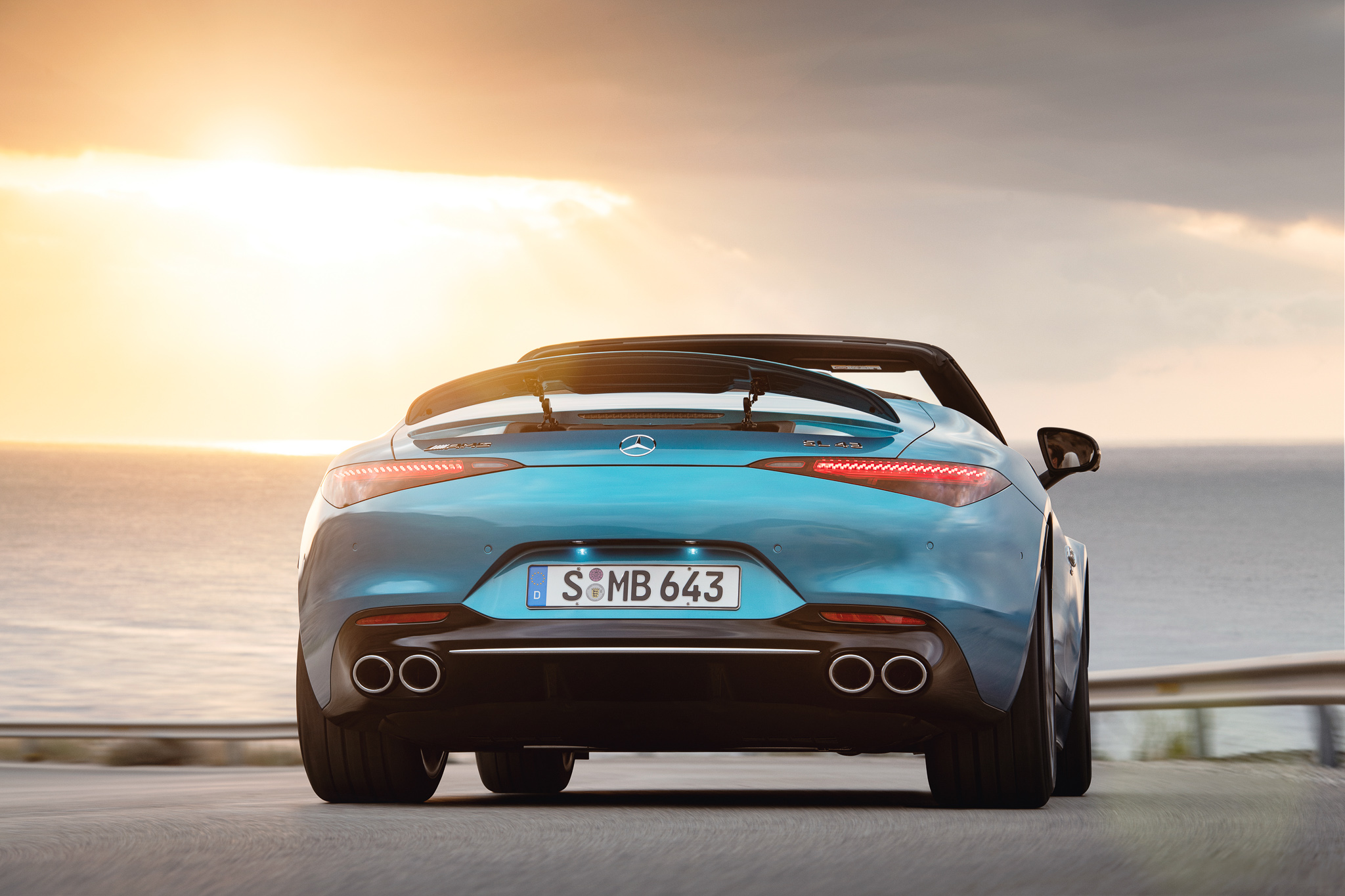 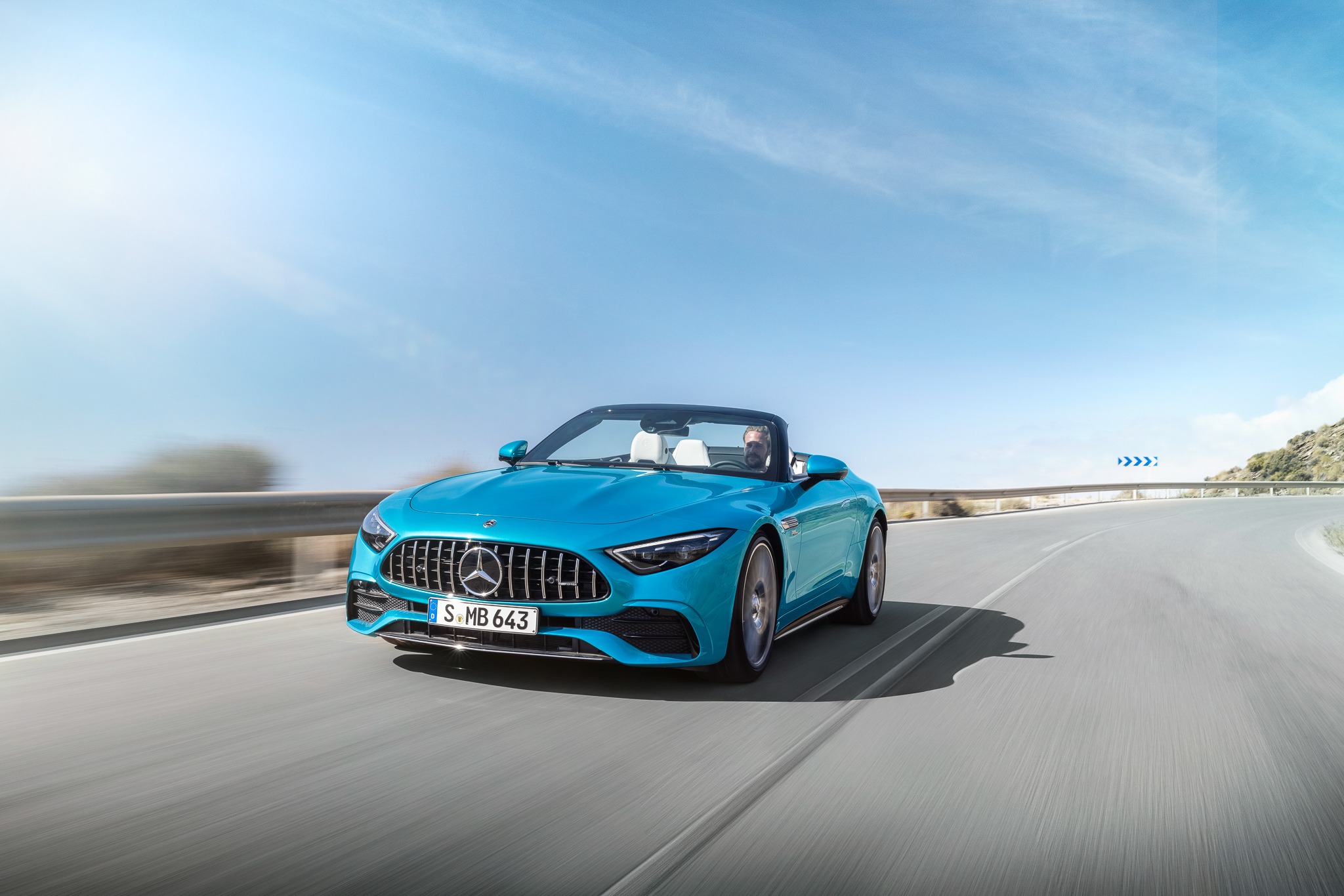 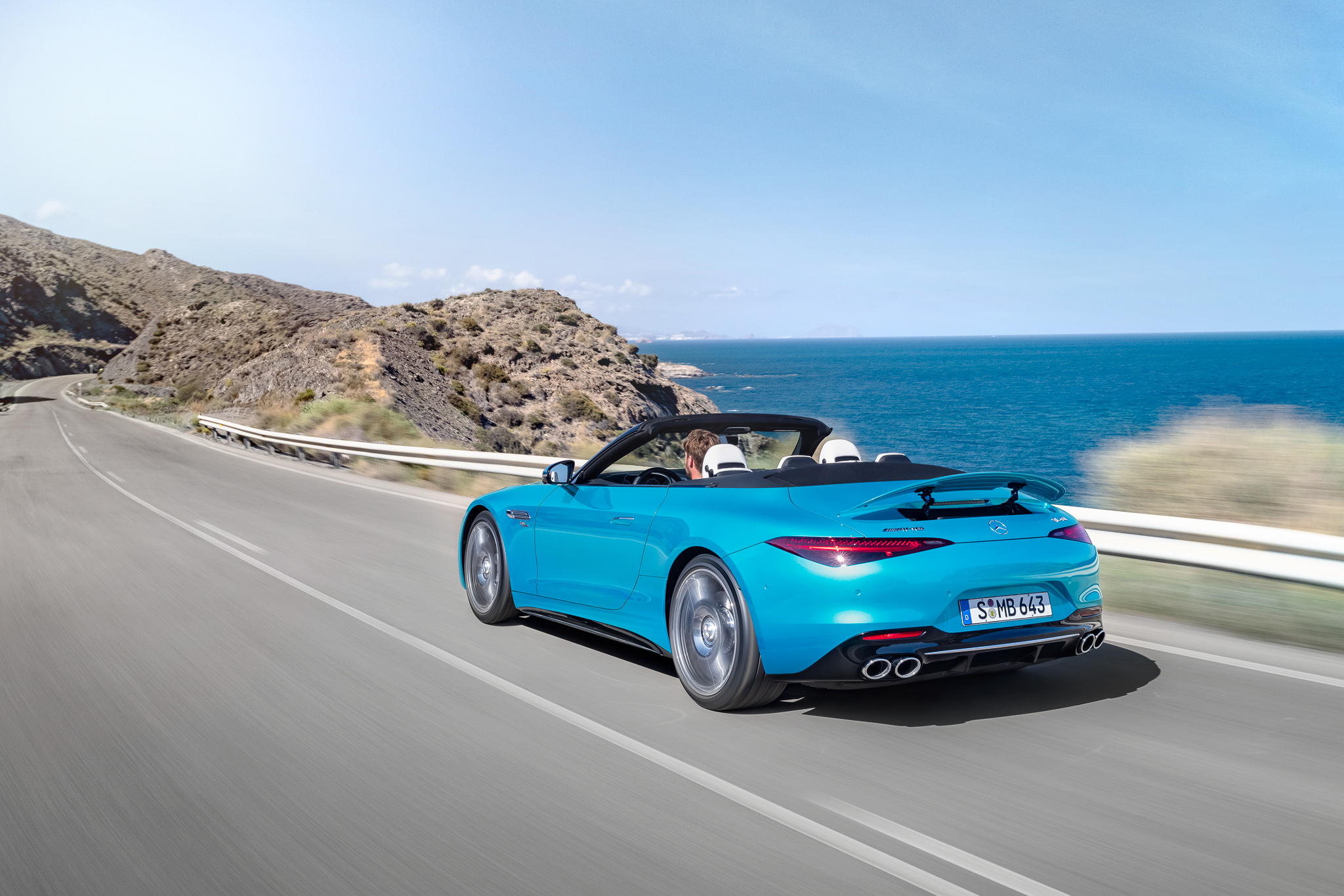 Mercedes has pulled the wraps off an entry-level version of the new SL, and the big news is the presence of a dinky little 2.0-litre four-cylinder engine.

Yep, Merc and AMG have halved the cylinder count for this SL43, which arrives after the 4.0-litre V8-engined SL55 and SL63. Brave for a luxury roadster, no? Mercedes does have previous, though. In the 1950s you could have a four-cylinder 190 SL, which Merc marketed as a smaller sibling of the iconic 300 SL.

The engine in this SL43 is actually a longitudinally-mounted version of the M139 four-pot that’ll be familiar from the A45 AMG, but don’t think this baby SL is an afterthought from Affalterbach. In fact, it gets some supremely complicated F1 tech that makes it rather interesting indeed.

For the first time ever on a production car, AMG has fitted an electric exhaust gas turbocharger. Sounds fancy, but it is actually rather easy to explain. Here goes: a super small electric motor is mounted on the turbocharger shaft and powered by the car’s 48-volt mild-hybrid electrical system. At low revs, the motor spins up the turbo so that there’s less lag when you press the throttle and the turbo is driven by exhaust gasses. Then, when you come off the power or even get on the brakes, the electric motor can keep the turbo spooled up so that power delivery is instant when you get back on the loud(ish) pedal. 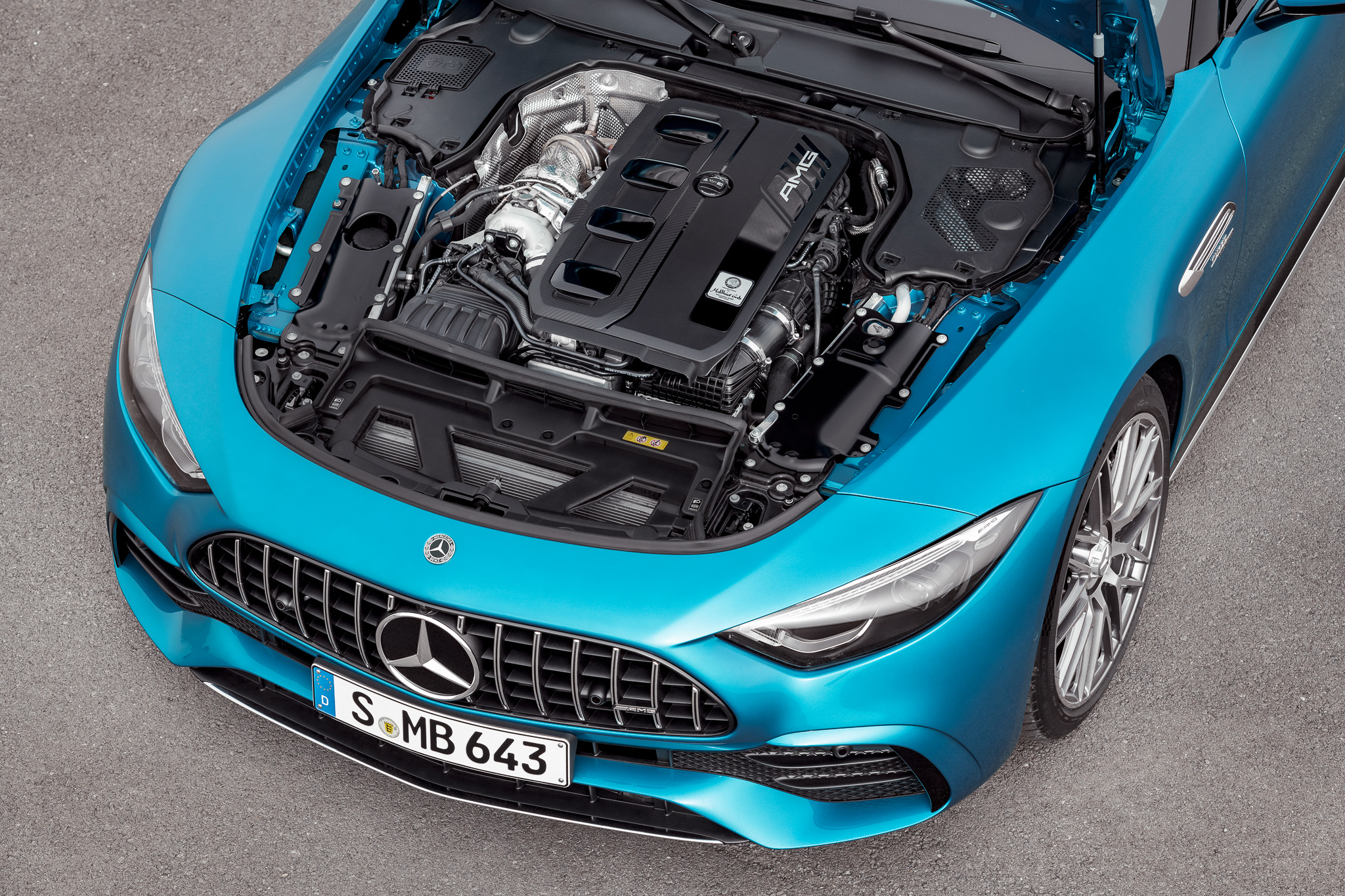 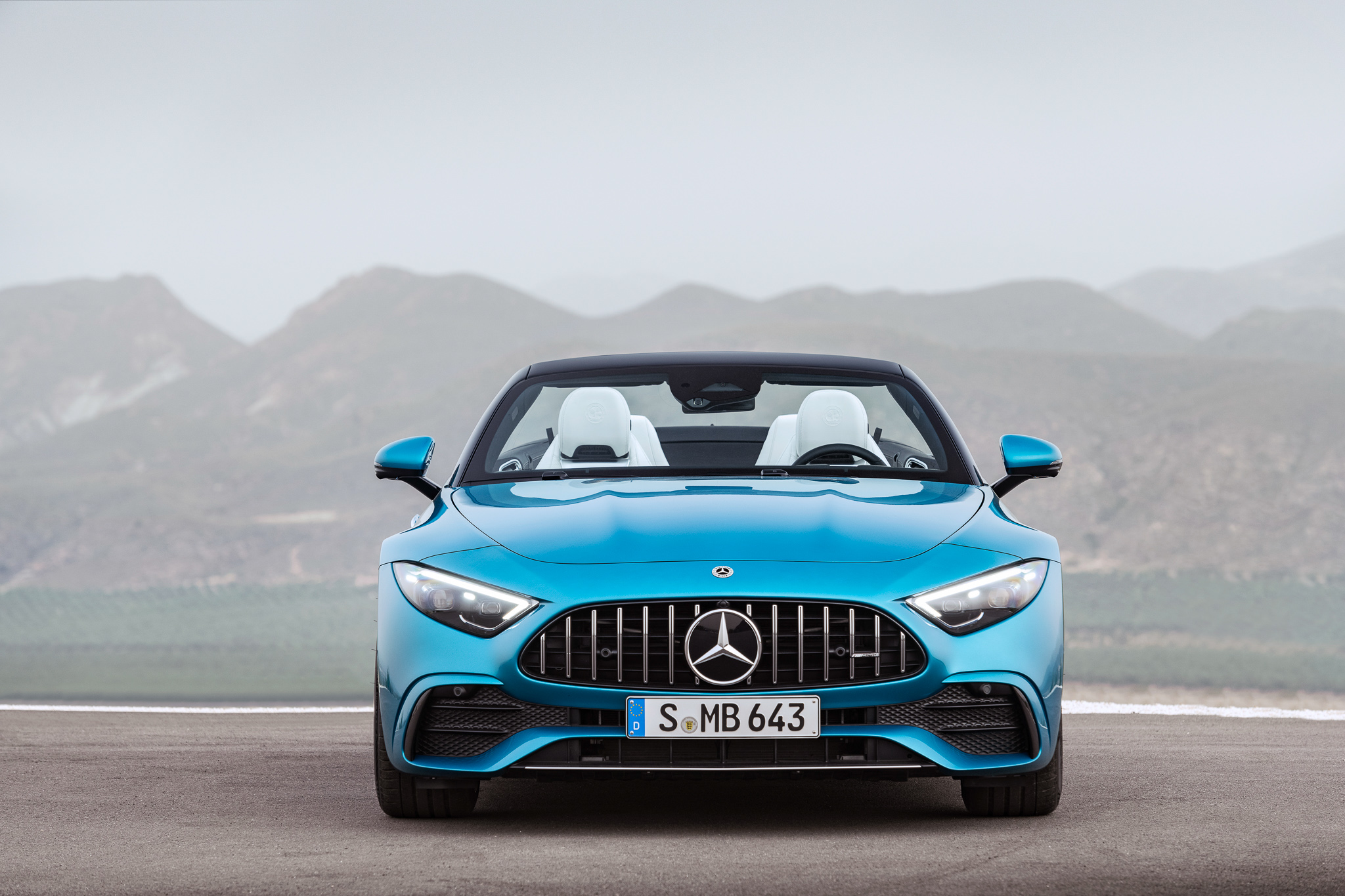 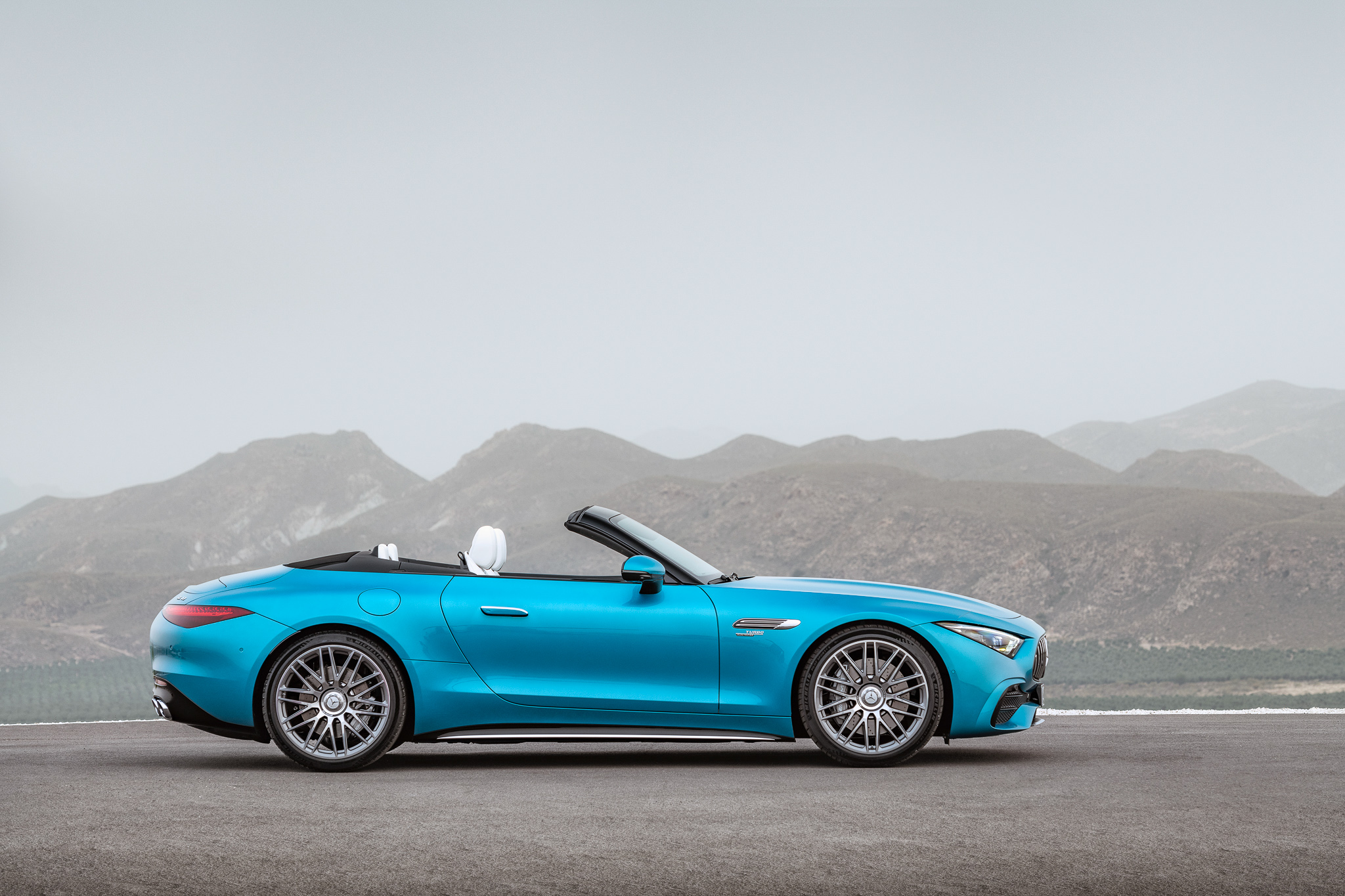 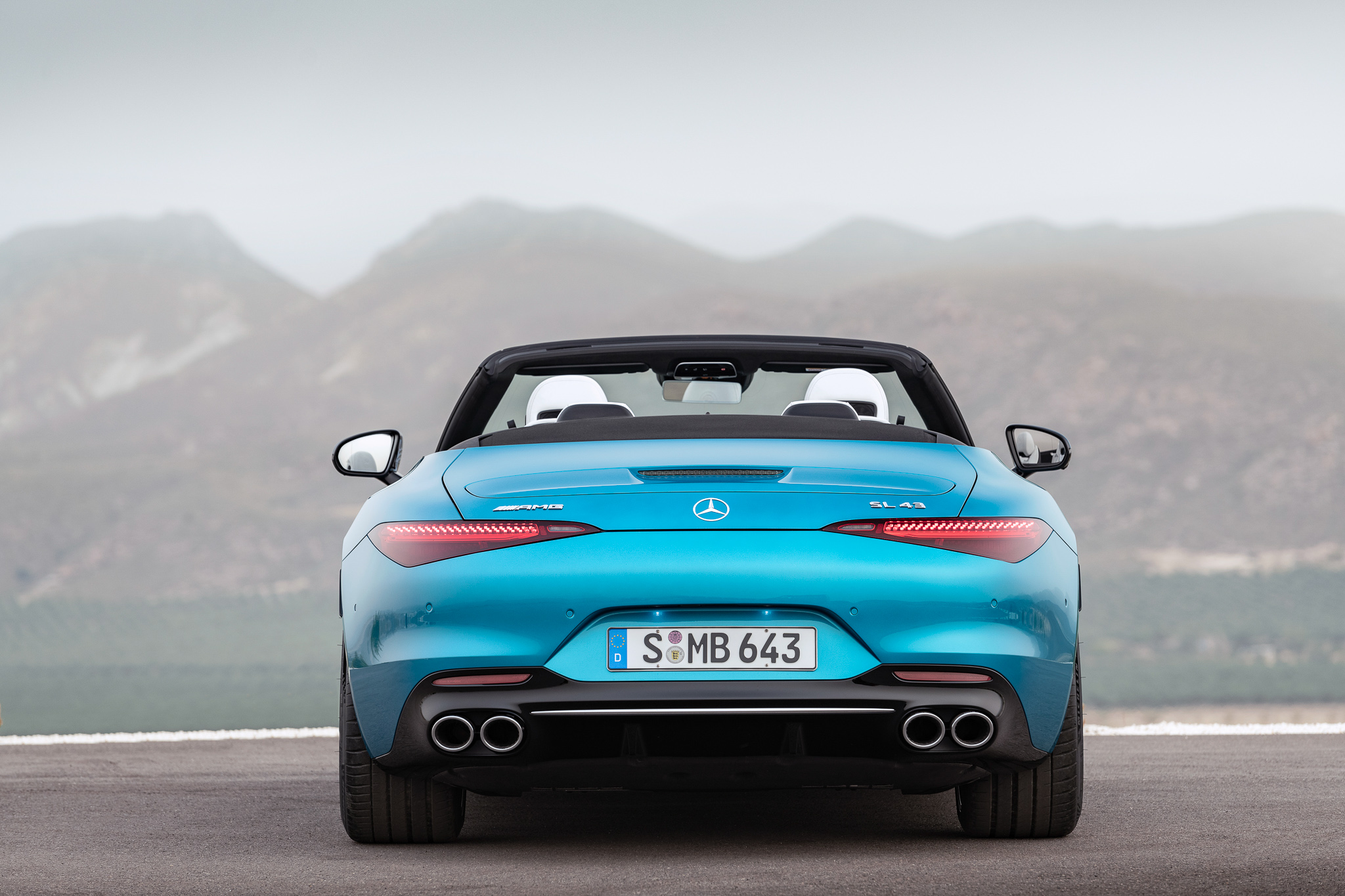 Essentially, the hope is that it solves the age-old problem of ‘small turbo = low peak power, but large turbo = loads of lag’. Clever right?

The end result is a lightweight engine up front that still manages to send 376bhp and 354lb ft of torque to the rear wheels through a nine-speed auto gearbox. Not quite as much power as the 415bhp in the bonkers A45 S, but it’d be fair to say that that’s one highly-strung unit.

Mercedes claims 0-62mph in 4.9 seconds and a top speed of 171mph for the 2+2 SL43, and the only real visual differences from the V8 cars are round exhaust tips and ever so slightly different front and rear bumpers. Some nice ‘Turbo Electrified’ badging on the flanks, too.

Smaller 19-inch wheels are standard on the entry-level car, with 20- and 21-inch units available as an option. Merc will also let you tick boxes for an Aerodynamics Package, AMG adaptive adjustable damping, rear-wheel steering and the AMG DYNAMIC PLUS Package. The latter adds a race mode, dynamic engine mounts, a limited-slip diff and 10mm lower suspension. Inside you get the SL's monster, portrait-mounted MBUX screen and ARTICO man-made leather seats, although Nappa leather will be another option.

But which option would you go for - V8 or 4cyl? Not as hardcore as GT3, but a step up from GT4 comes this near-700bhp special Check out some of the best future classics in Singapore Mercedes’ newest high-performance compact SUVs let you rule both the urban jungle and the road at the same time. This is the 802 horsepower Mercedes-AMG S 63 E Performance

The new S 63 E Performance is the most powerful S-Class within the whole gamut of Sonderklasse vehicles.