The all-new Lotus Eletre is a fully-electric performance SUV 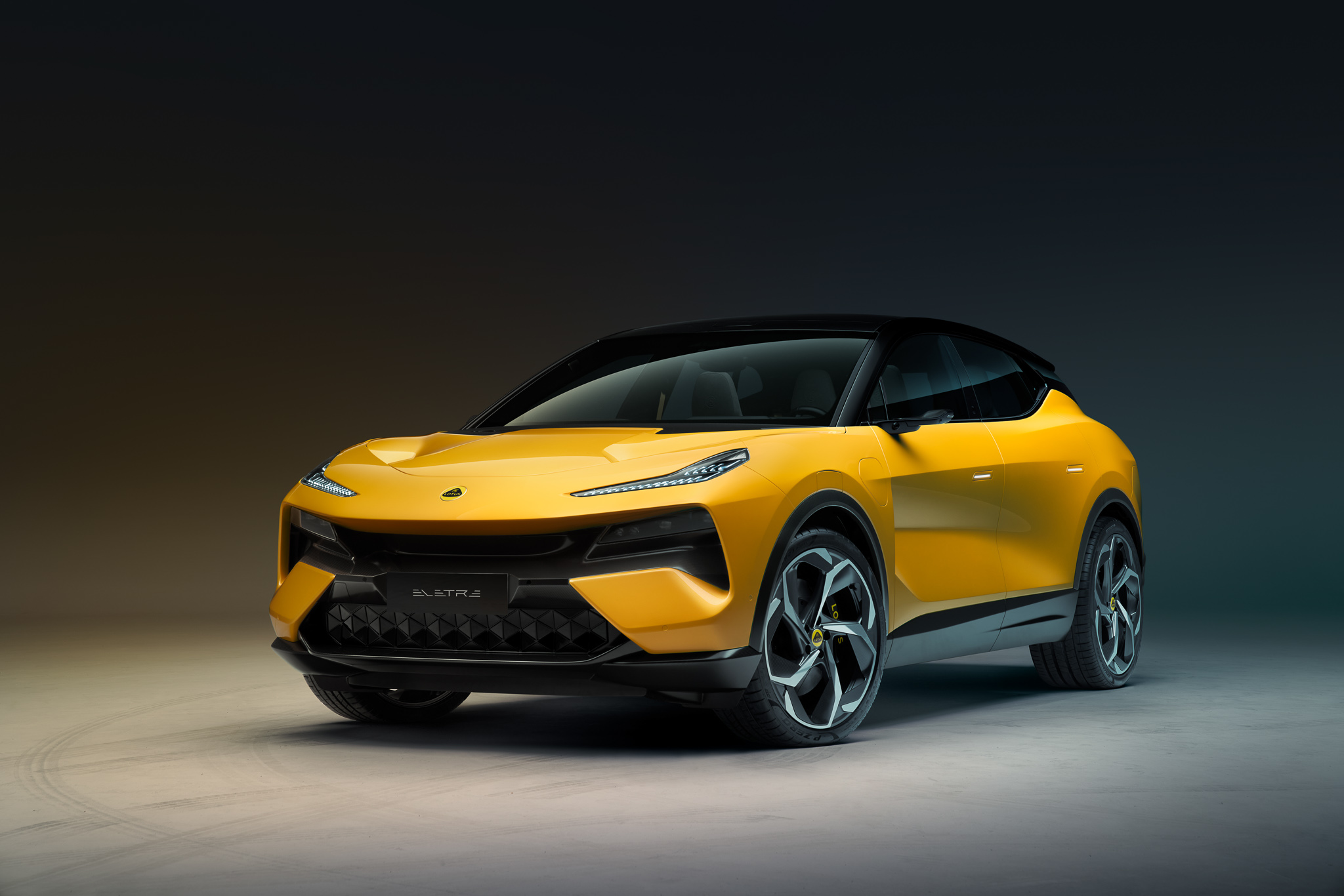 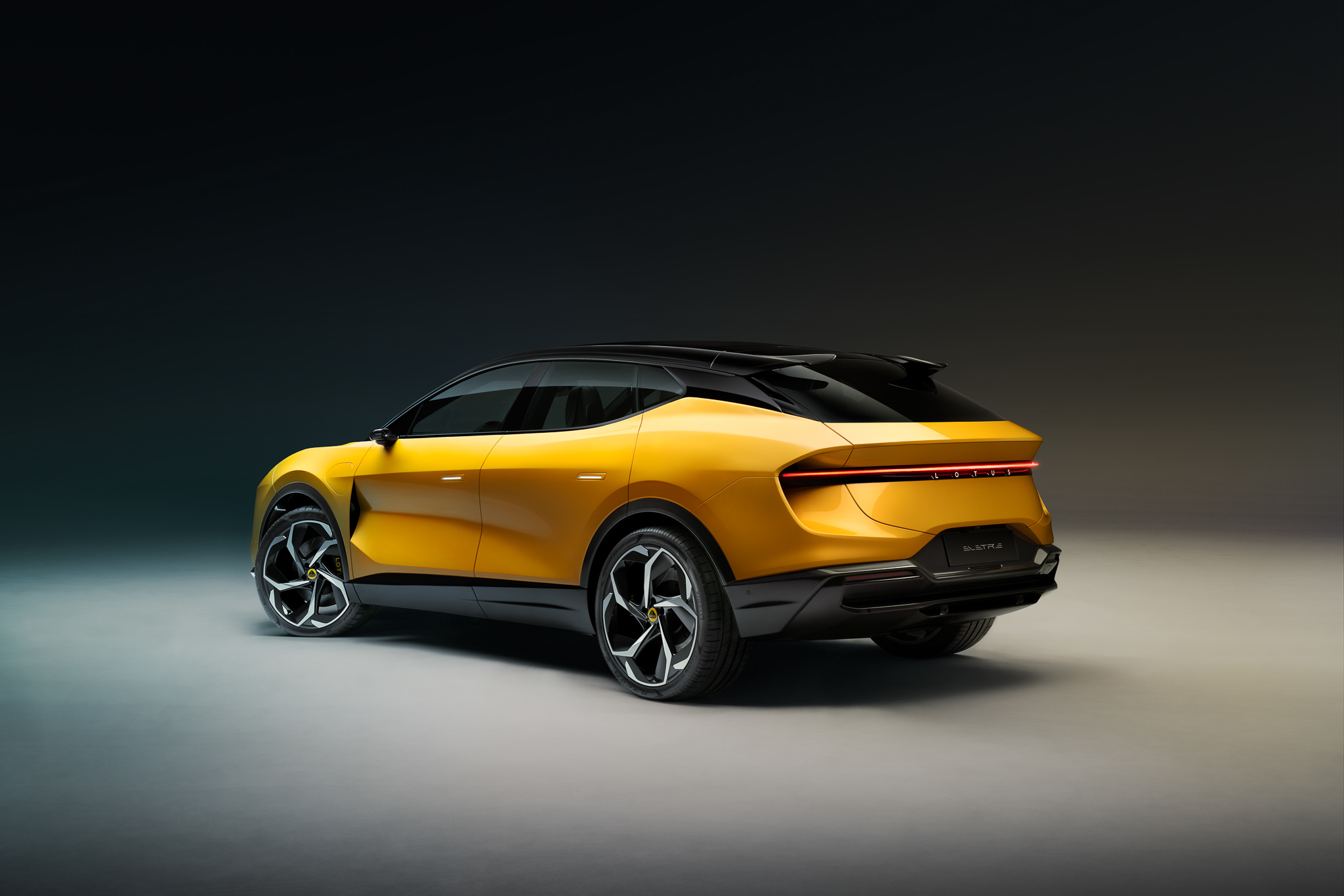 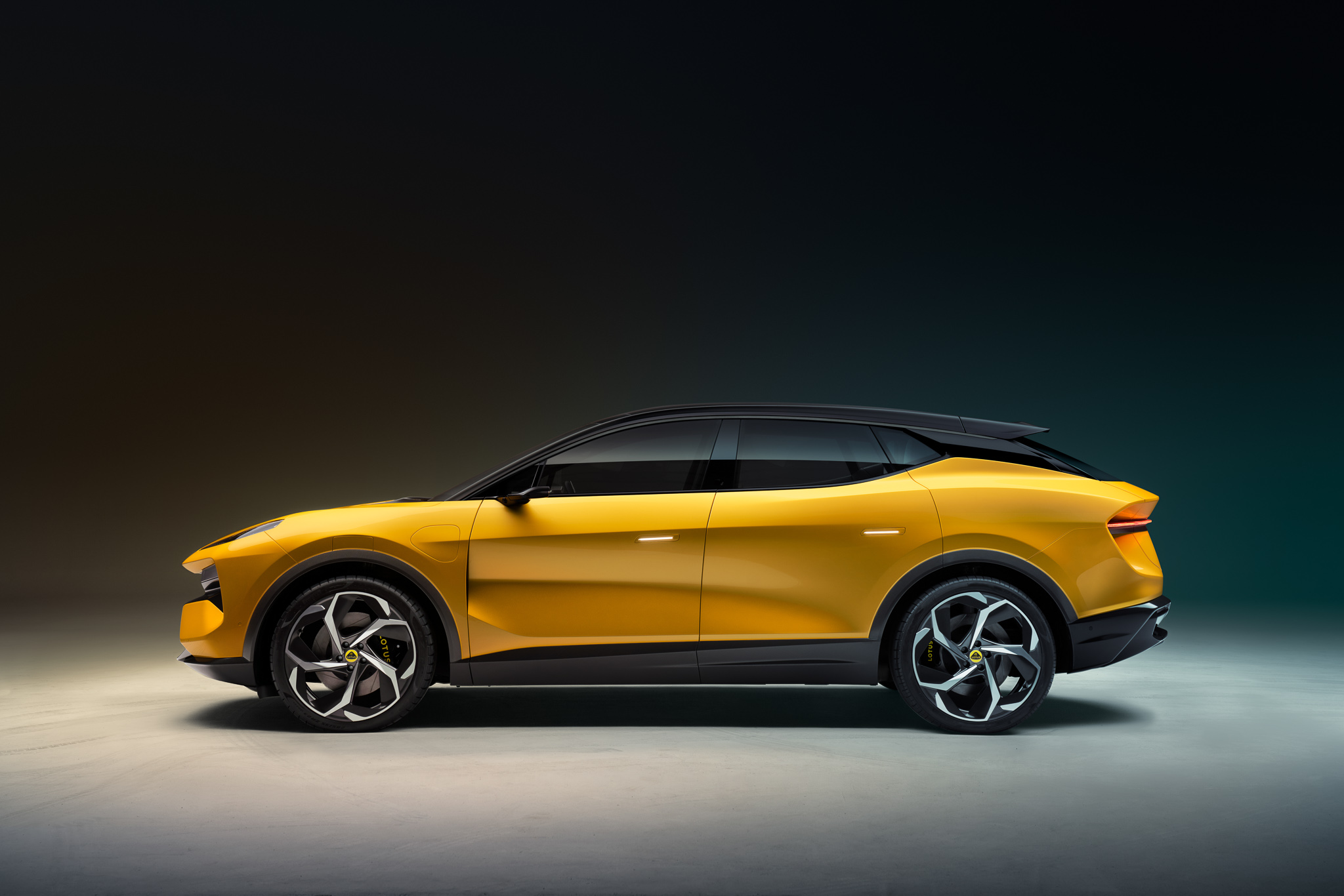 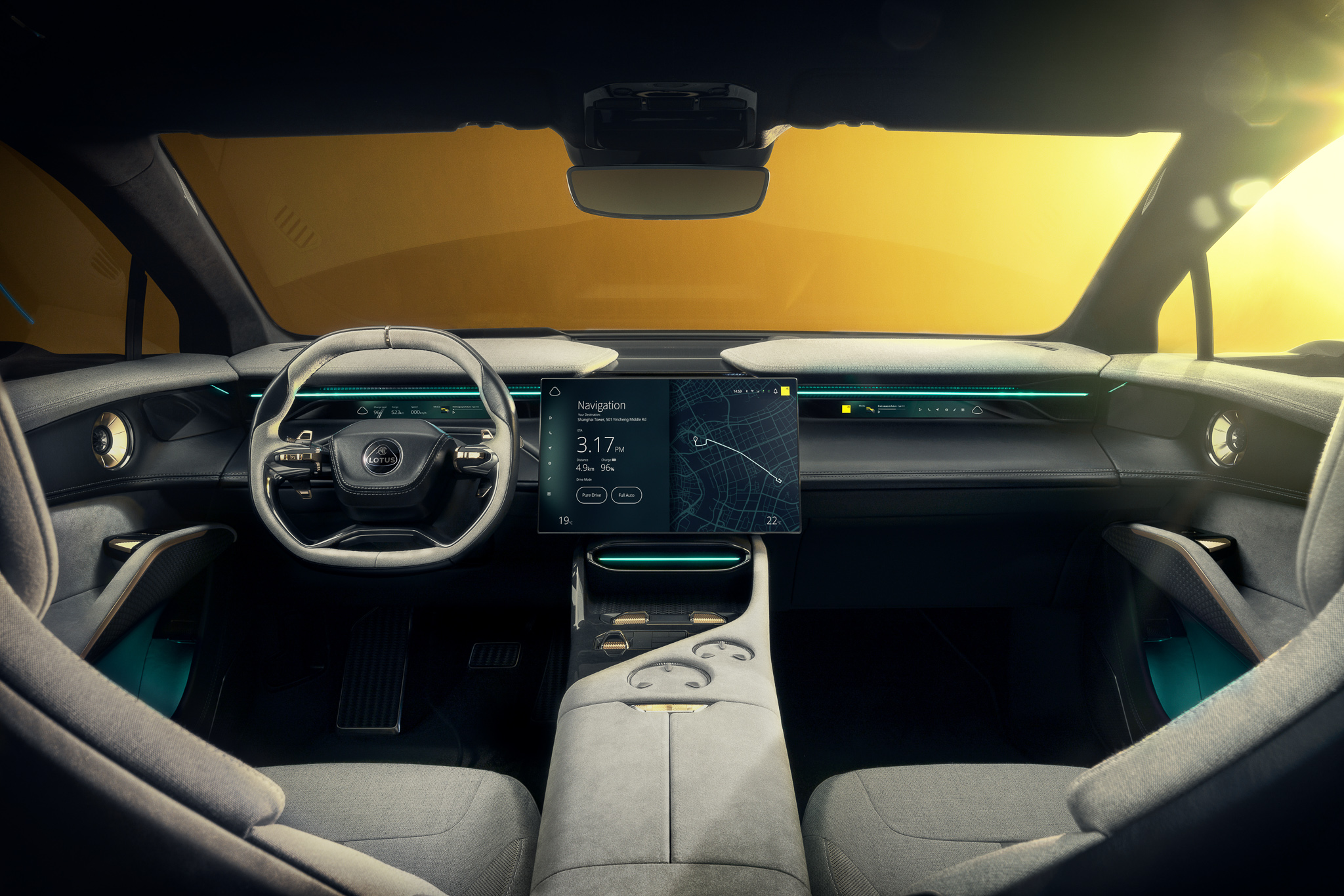 The all-new Lotus Eletre is a fully-electric performance SUV

He’s been gone almost 40 years, but when your founder was as charismatic and clever as Colin Chapman, the shadow that’s cast is lengthy. ‘Simplify, then add lightness’ was his best-known mantra, so what would he have made of our increasingly, soon-to-be exclusively electrified world, and Lotus’s place within it? Complicate, then add weight…

We suspect he’d have been a lot more OK with it than the beetroot-faced trolls that are no doubt bouncing off the social media redline this very second. Oh, the Lotus Eletre that you’re looking at here has, on the face of it, as much in common with a Lotus Seven or Elise as a speed-boat has with a cross-channel ferry. It’s a pure-electric SUV, weighs north of 2.2 tonnes, and, can you believe, also happens to be the first Lotus in the company’s 74-year history to have four doors. It’s powered by a 105kWh battery good for 600bhp-plus, promises a WLTP range of 373 miles, and is AI future-proofed in all sorts of ways, including the world’s first deployable LIDAR for level four autonomy. This isn’t a car, it’s a quantum leap. 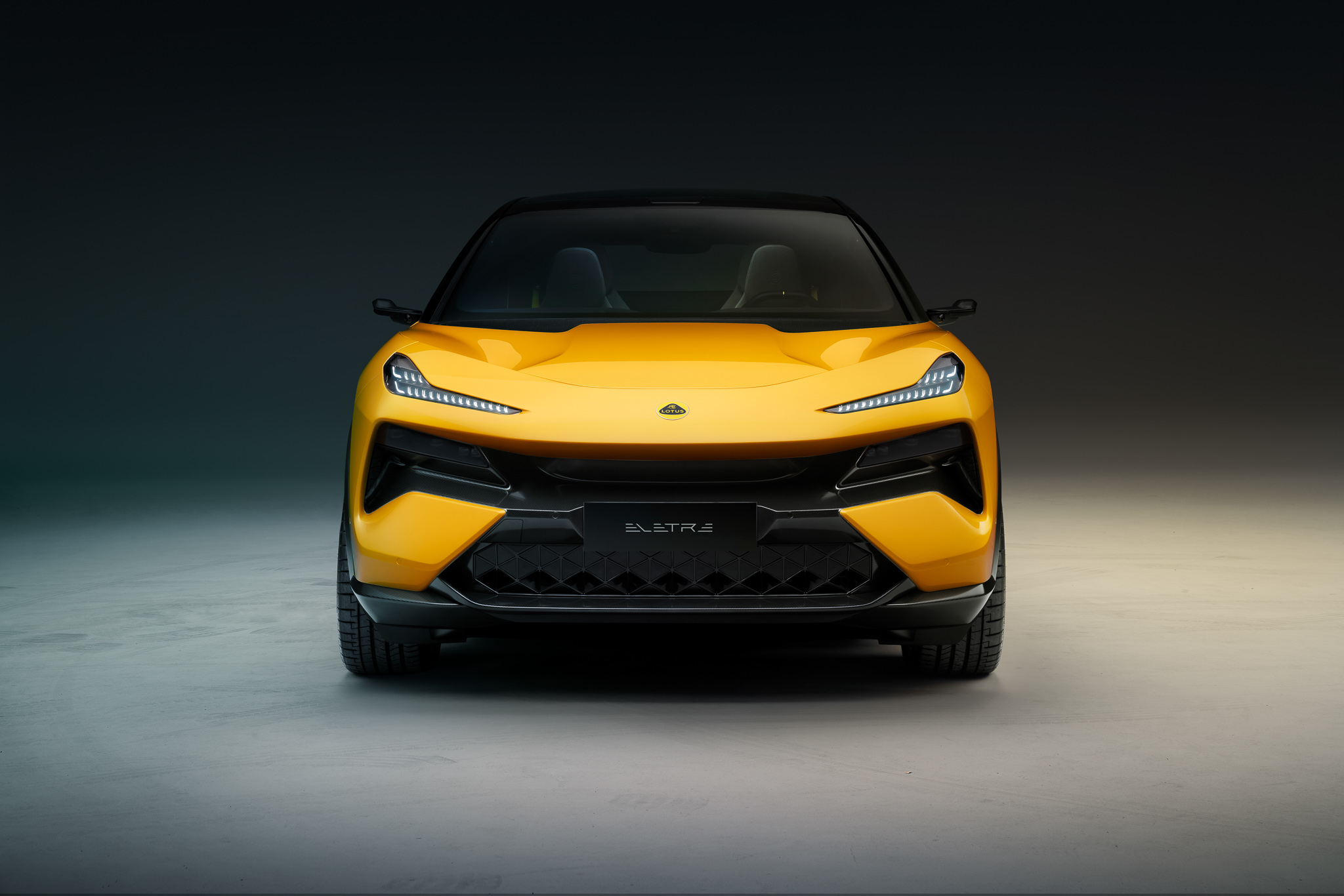 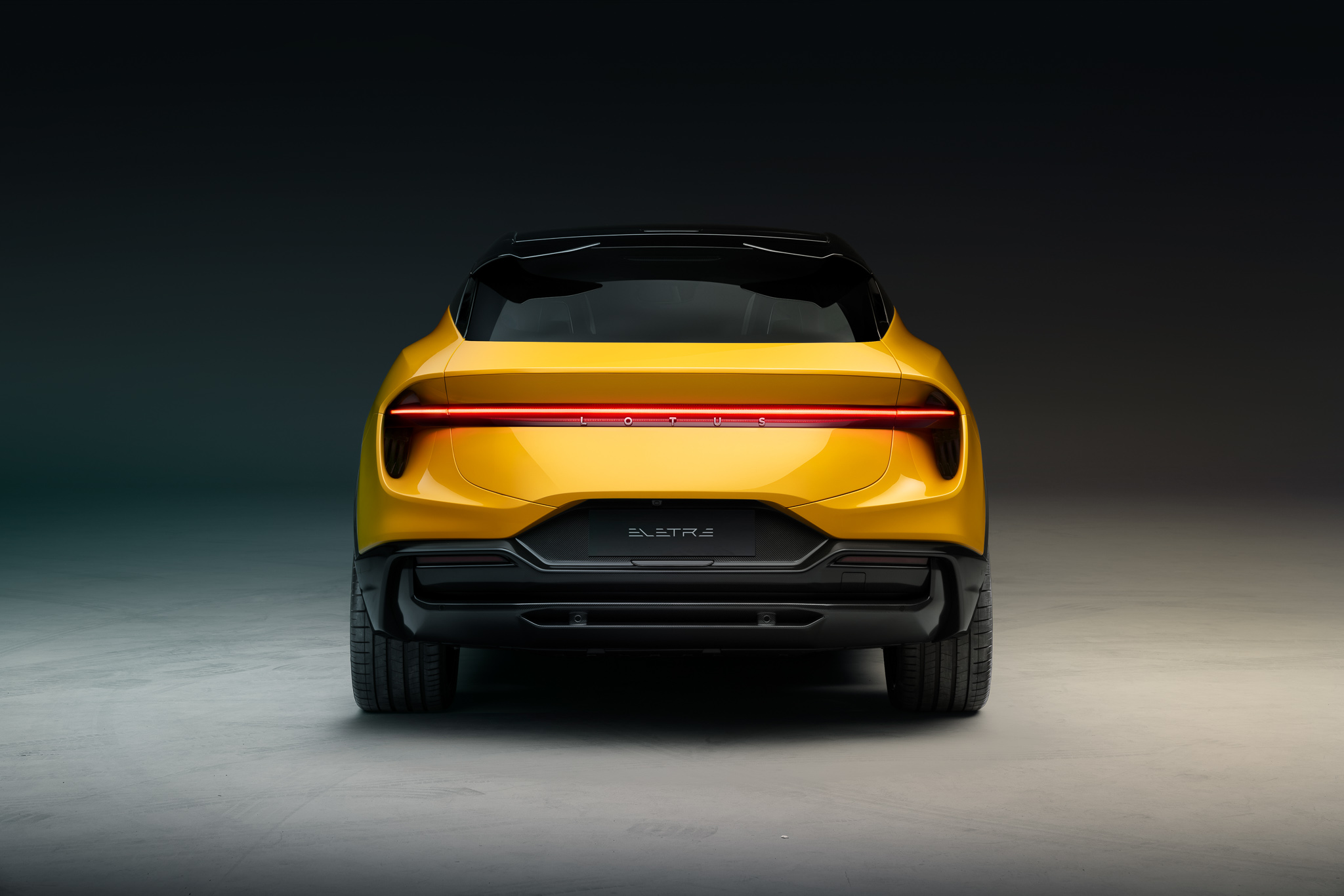 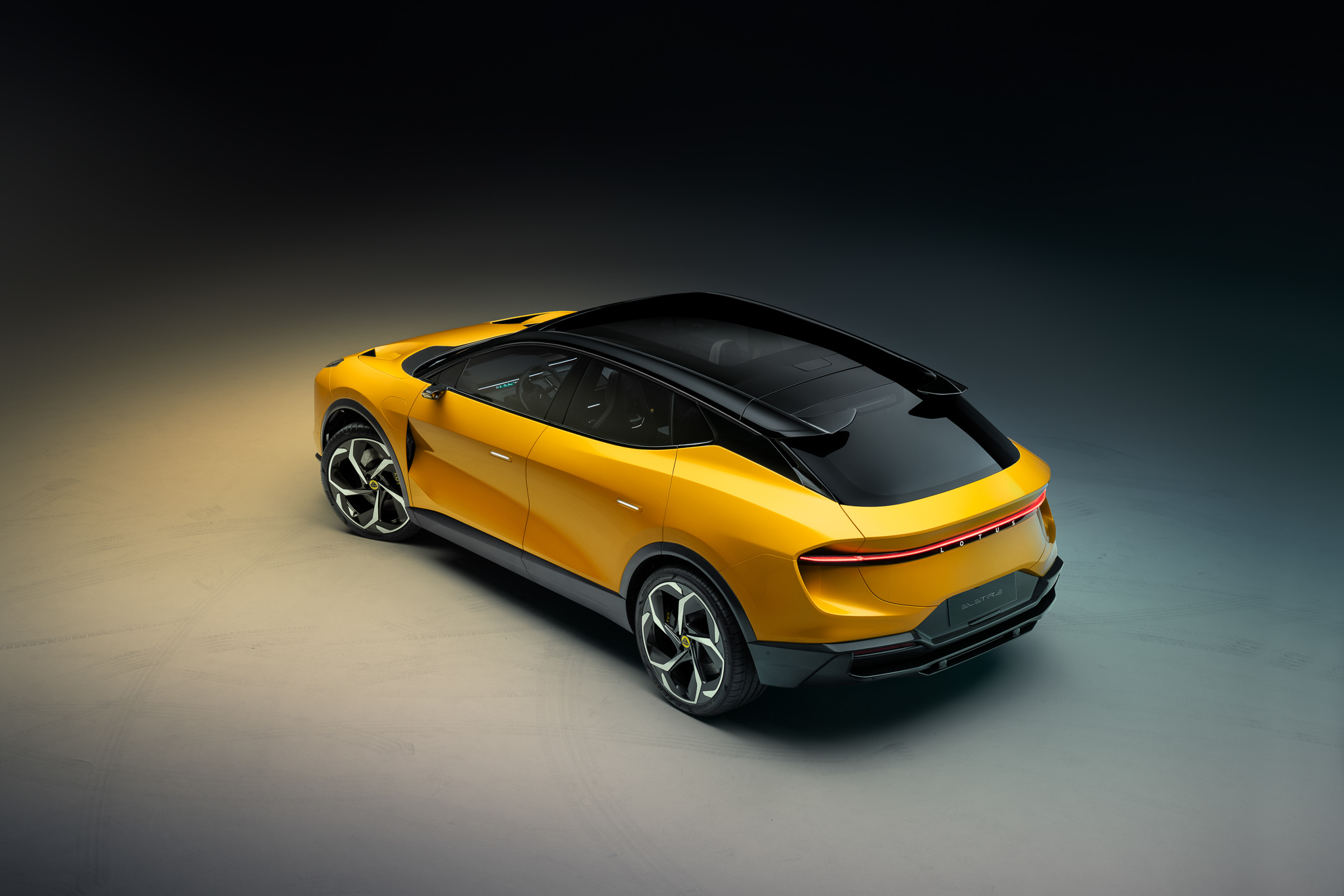 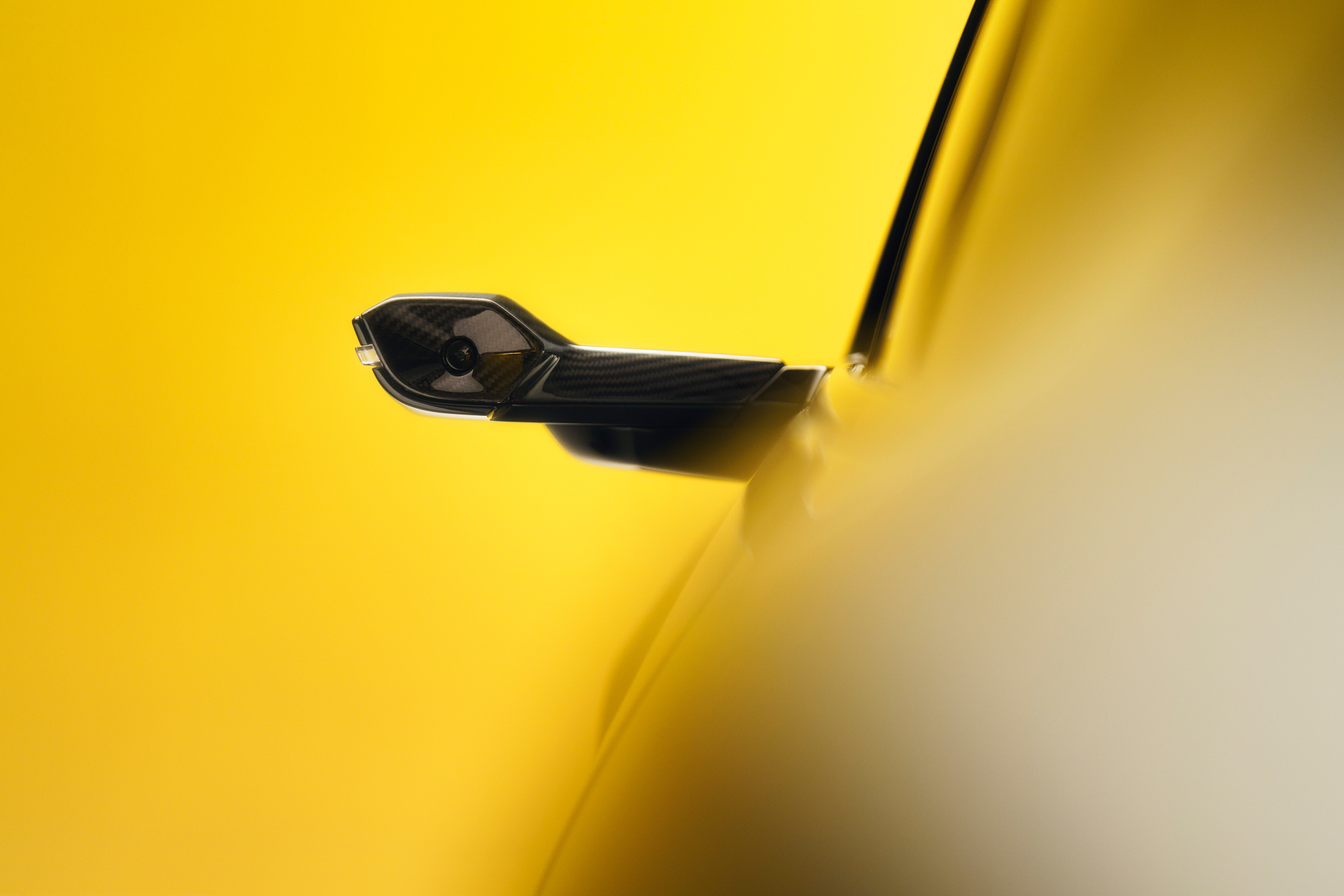 It’s also pragmatic. Lotus can’t survive and flourish on the proceeds of the Emira and Evija alone. And if you’re still spitting feathers as you try to absorb the Eletre and what it signifies, just remember that Porsche is a committed SUV manufacturer these days (160k Cayennes and Macans sold last year) with a tasty side-line in sports cars. Chapman was a businessman above all else, and he generally knew which way the wind was blowing.

In an easterly direction, as far as the Eletre is concerned. This, trumpets Lotus, is the first in a new range of premium lifestyle electric performance vehicles to be built at an all-new, state-of-the-art production facility in, erm, Wuhan, China. A city of 11m people, and somewhere you wouldn’t have heard of until a few years ago when a certain contagion emerged, but let’s not dwell on that. Perhaps it bugs you that Lotus is now part of the Chinese Geely monolith, rather than being proudly independent. On the other hand, where would Lotus be now were it not for a generous infusion of foreign capital?

Nonetheless, its PR people are keen to press home something they call ‘born British, raised globally'. The Eletre is a certainly a multi-national product, and surely all the better for it. China is a world leader in battery tech, Germany for the hard- and software, Sweden in safety, while the UK oversees the sexy stuff like the chassis tuning and design. New Lotus can tap into all of these outposts, and some of the automotive world’s finest minds have had their say in the Eletre. Nothing wrong with this picture, is there? 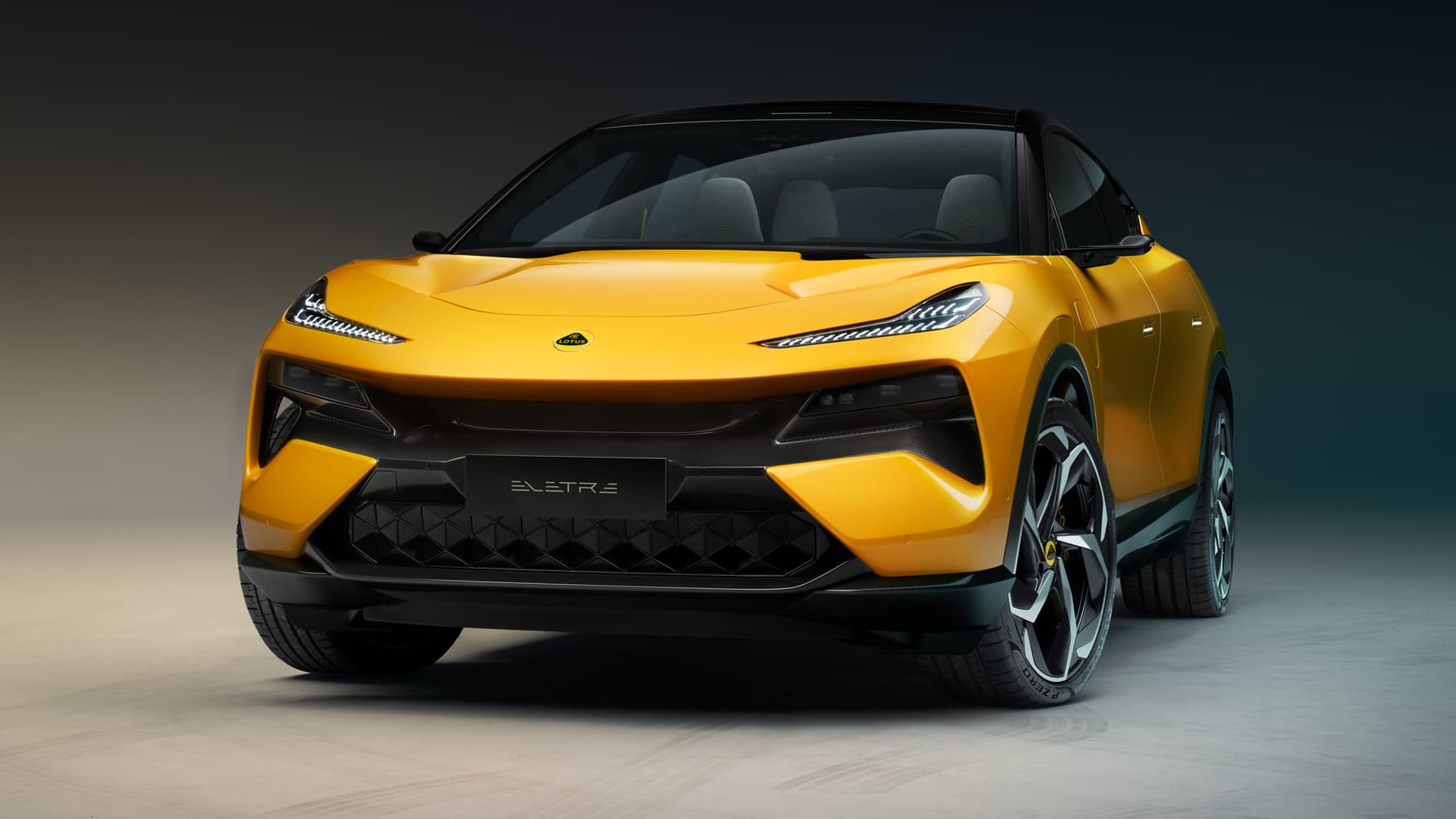 As well as Hethel, Lotus now has also a design centre in Coventry, and it’s here, a week before Christmas, that TG has ventured to see the newcomer. There is no precedent for a Lotus SUV of any sort, regardless of propulsion, and looking at a car shorn of context in a studio is always a bit odd. But as design lead Ben Payne throws the door open, several things hit you about the head like a giant comedy frying pan. Firstly, it’s big, 5.1m long, 2.2m wide and 1.6m tall. It’s almost identical in size and visual impact to the Lamborghini Urus, neither vehicle backwards about coming forwards. This is apparently the new paradigm.

It sits on the optional 23in machine-cut, carbon fibre infused wheels, although 22s are standard; these are the  minimum diameter the Eletre demands or it risks looking over-bodied. It’s theatrical, too: its headlights and the rear light ribbon using ‘RGB’ LEDs – red, green and blue, the combination of which can conjure up 16 million different hues – to boost the car’s graphics, but also enabling it to ‘communicate’ with the owner and other road users. This includes a ‘salute’ as the driver approaches, the active front aero slats ‘breathing’, and the flush door handles popping into view. The Eletre uses ultra wide-band (UWB) tech and recognises the driver, automatically setting all the required preferences from an app. No key needed here.

All told, it’s not a car that wears its commitment to high technology particularly lightly, which is a deliberate move on Lotus’s part. We’re a long way from a borrowed Rover K-series engine here.

It’s also highly aerodynamic. The most advanced SUV in the world, in fact, when it comes to cleaving the air, via various active and passive devices. You’ll notice a design continuum from the Evija and Emira, mostly in the way that the Eletre’s body has lots of strategically placed holes and negative spaces. Porosity, they call it, and it’s useful for cooling and optimising the air flow under, around and through the body. It matters in an EV because it helps achieve greater range, as well as improving overall performance. 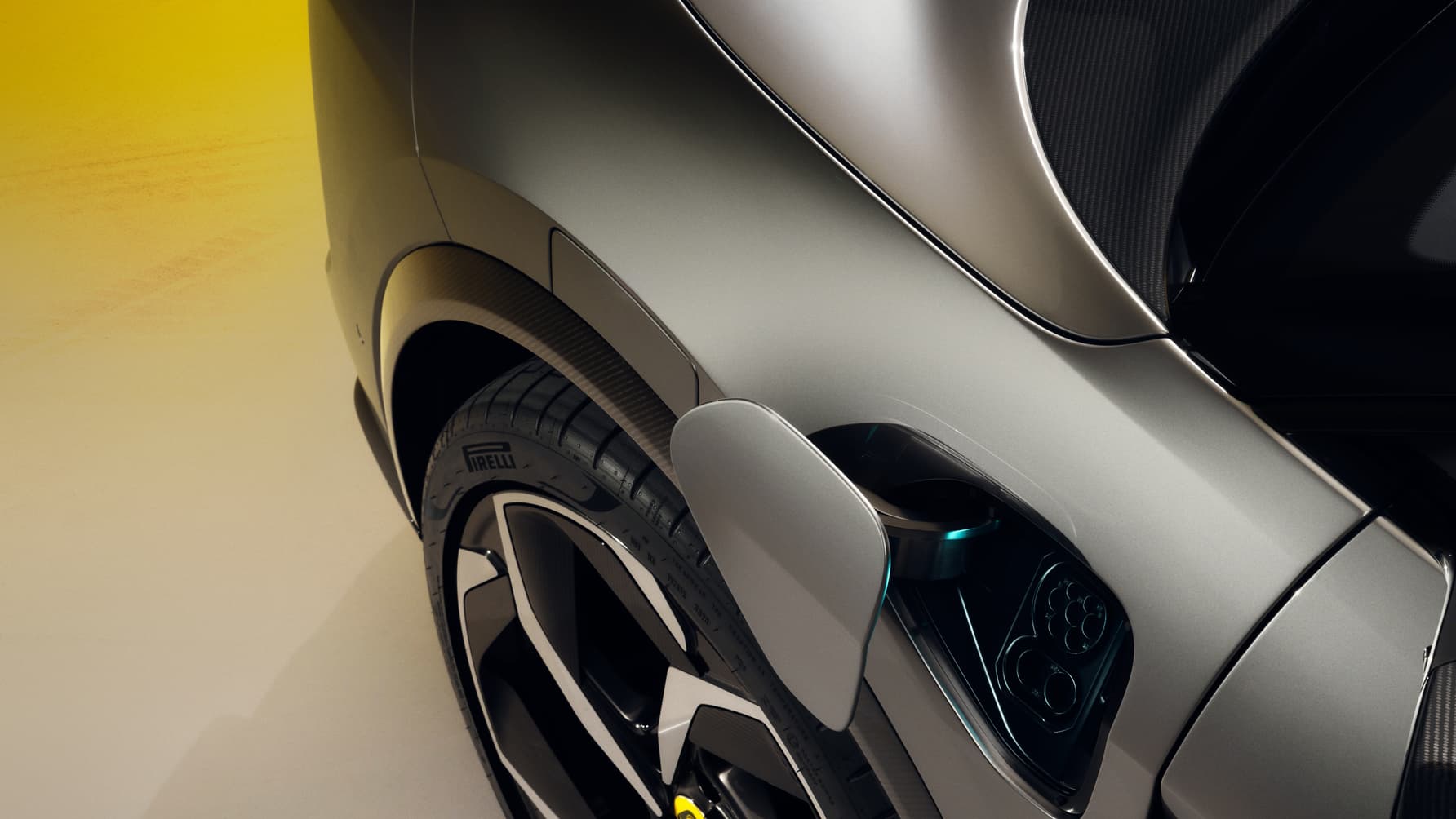 Which is very far from shabby, by the way: with a motor on each axle, all-wheel drive, and a new 800v modular platform (called EPA) that mixes aluminium and high tensile steel for greater rigidity, the Eletre warps to 100km/h in less than three seconds. An increasingly pointless metric, to be honest, but at least there’s fealty there with Lotus’s high performance history. And it’s all grist for the YouTube EV drag racing mill. The Eletre has five-link suspension at the rear, and all versions ride on air suspension with continuous damping control. A 48v anti-roll system, torque vectoring and active rear axle are available, depending on model. All Eletres come with four drive modes: Range, Tour, Off-Road (as if) and Individual.

"We took the opportunities the electric architecture gave us," Payne explains, as we begin a lengthy perambulation around the car. "Then we looked at our legacy of mostly mid-engined sports cars. The Eletre has a cab forward silhouette, short overhangs, and a fast windscreen. The visual weight is centred between the wheels. Look at a car like the Aston Martin DBX, which has a long bonnet and clearly houses a big engine, so that the cabin is set well back and the mass is over the rear wheels. Lotuses don’t look like that. We’ve tried to take that mid-engined aesthetic and impose it on this vehicle archetype. There’s no traditional engine so the firewall isn’t as far back which means we can squeak everything forwards. But there’s a lot of detail on this car beyond proportions, and a lot of sculpture."

Indeed. The front end resolves into a complex looking blade form, best appreciated in profile, while the daytime running lights sit above and separate from the main matrix lights. Beneath that are triangular sections that open or close like petals to cool the radiator or battery. This also helps reduce drag when they’re shut. The car’s entire upper section is blacked out and, together with the lower cladding, minimises the car’s visual mass. This leaves the eye to land on a slimmer middle section and the more propulsive looking rear arches. It’s a design trope, for sure, and the Eletre has to get busy with the tricks in order to distract from the sheer volume of sheet metal a 5m-plus SUV encompasses. But the result is high impact, and it’s no stretch to see this thing starring in a neon-cloaked Weeknd video somewhere down the track.

The cantilevered rear spoiler is made of carbon fibre and is another element on the car that ‘floats’. It channels air down onto the three-stage active rear spoiler, but there’s no centre section, a gap that leaves room for the rear LIDAR sensor to function. "Sometimes they’re added at the last moment, and you end up with these barnacles all over the car," Payne says. "Lotus has always been about beautifying the engineering. Everywhere we can we’re trying to push air through little channels, but the sculpture also manages the airflow. The exit duct on the wheel-house reduces the turbulent high pressure air that’s generated there." There’s also a floating panel on the D pillar, which features the word ‘Eletre’, allowing the air to be turned at the last moment to provide a separation and control the wake. The Eletre’s interior is where that quantum leap is really felt. The most celebrated Lotuses were light because there was little or nothing inside them, not an approach that’ll fly on an electric SUV. But the Eletre manages the illusion of lightness by paring away surfaces where possible, with an unexpected historic reference. "The interior of the Seventies Esprit was a touchstone," Payne says. "There are floating wingtips on the top of the dashboard and we’ve shrinkwrapped things as tightly as possible. Most dash sections on SUVs are big and heavy, but we’ve tried to remove as much mass as possible."

The main instruments live in a slender, 30mm-high strip, minimising the info. AR HUD is also standard. The 15.1in central touchscreen is the latest gen OLED, as used in the Mercedes S-Class, and 95 per cent of its functionality available within three touches. As in Mercedes’s flagship, there’s an interior light bar that communicates with the driver, issuing a lane departure warning, for example, or illuminating when there’s an incoming phone call. It’s multi-sensory, Lotus says, with the potential to irritate, we’d add, although the driver can back most of the technology off if they want a less obviously hi-tech environment. There’s recycled carbon fibre inside, and a keen emphasis on sustainable materials, including artificial microfibres on the main touchpoints. It’s a very tactile, high quality environment. There’s no visible plastic inside the car anywhere, and proper analogue buttons for climate control and drive mode functions. Lotus says the UI will constantly update and evolve, with OTA software updates, and 5G compatibility. British specialist KEF is supplying hugely powerful bespoke audio, with partially exposed speakers whose design mirrors the rest of the car, and the option of a 1,500-watt, 23-speaker system. Sheesh. There is seating for four or five, depending on how practical or limo-like you want your Eletre to be, and a vast panoramic roof. There are also many, differently-sized cup-holders. Truly, this is a Lotus interior like none we’ve ever seen.

OK, so when can we have the clubsport version? Ayrton Senna won his first ever F1 race 35 years ago Official: Alpine and Lotus will build an electric sportscar

Coming your way in 2025: two of the lightweightiest names to collaborate