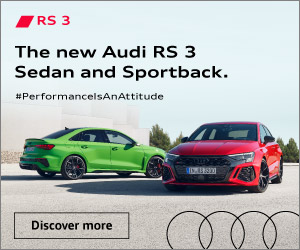 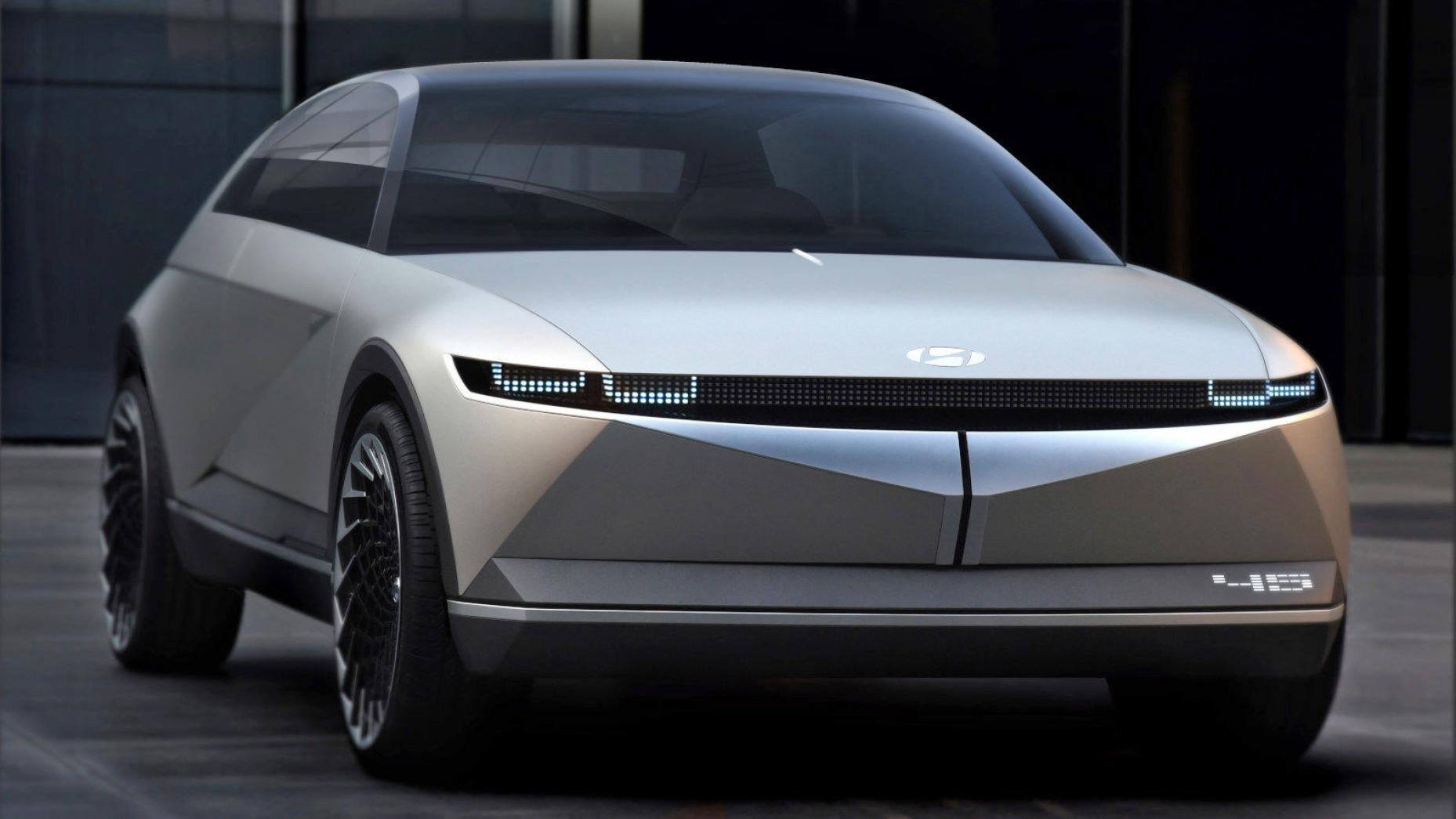 Who’s Hyundai, and when did it start making cars?

Hyundai was founded in 1947, two years after the liberation of South Korea. But the Hyundai Motor Company didn’t open its doors until 1967. Hyundai does so much more than cars, y’see - it makes its own steel, builds ships, constructs roads… this is a ginormous enterprise that’s about so much more than generously warrantied crossovers.

The first actual Hyundai didn’t launch until 1974, mind: the company had a strong relationship with Ford in its early days and built Cortinas under licence for over a decade. The Pony was the first Hyundai proper, designed by Giorgetto Giugiaro, no less. And the company now has the swagger to hark back to its styling via the smart 45 Concept (pictured), which previews the design language of its future electric cars.

Yeah, Hyundai’s been among the electric and hybrid pioneers in recent years, working alongside its cousins at Kia to launch mainstream plug-in cars before behemoths like Volkswagen or Ford could manage it. This is one of the few companies that’ll sell you a hydrogen fuel cell car NOW rather than a thousand years in the future, too.

And it’s name? Hyundai is Korean for ‘modern times’, the Korean word ‘Hyun’ (현) meaning ‘modern’ or ‘present’ and ‘Dai’ (대) translating into ‘era’ or ‘generation’. Anyone who drove an Atoz or Trajet around the turn of the century would have laughed that explanation out of the room. 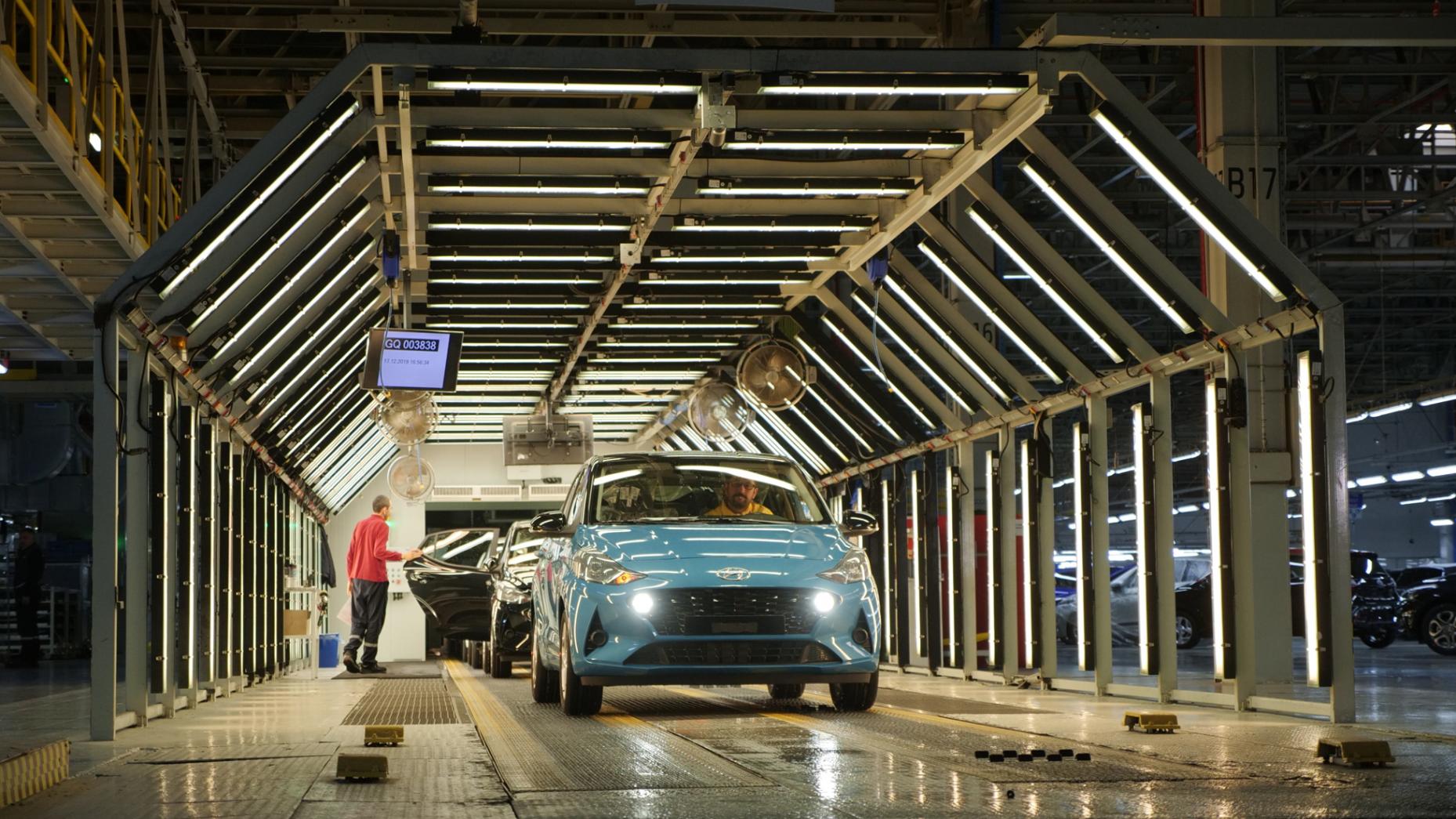 Where are Hyundais built, and how many does it build a year?

Hyundai has a stonking ten factories to its name. The original - and biggest - is in Ulsan, South Korea, and it sees the manufacture of cars alongside ships. It’s touted as the world’s single largest carmaking facility. There are plants in China, Brazil, the States, Russia, Turkey and the Czech Republic, too, and together they pumped out 4.45 million cars in 2019.

Hyundai opened its European R&D centre in Rüsselsheim, Germany in 1994 - the first step on the path to cars that’d properly rattle the establishment - with its motorsport base just 65km away in Alzenau.

UK sales began in 1982 and Hyundai has sold over 1.4 million cars here since. 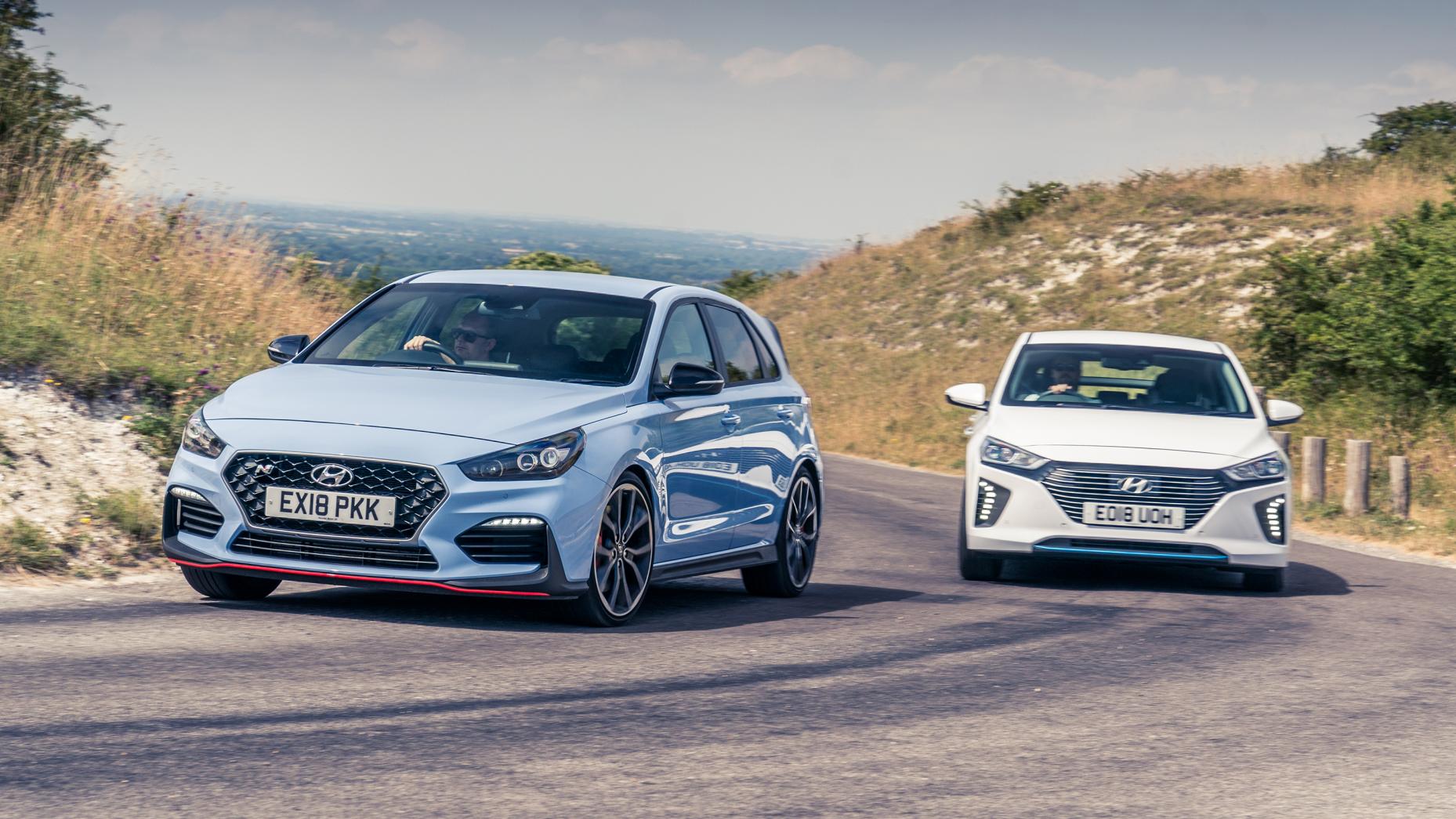 What cars does Hyundai build?

Hyundai’s current range is diverse and competitive, and a far cry from when it sold a sporty hatchback called the, um, Sporty. Seriously.

At the lower rungs you have the i10, one of the best city cars in the business, and the sharply appointed new i20, which will spawn a proper compact hot hatch. Then you’ve got the i30 hatch and Merc CLA-wannabe i30 Fastback, each with a quick i30N version offering 275hp and a rally refugee soundtrack.

Beyond that, there are a bunch of SUVs - the Kona, Tucson and Sante Fe are all decent things - and its increasingly vast array of electric and hybrid models, as well as the Nexo fuel cell.

Hyundai’s range elsewhere gets even more interesting, in the US specifically. Its latest-gen Sonata sedan, the wild Veloster coupe and the nattily styled Genesis range all prove the company’s days of peddling cheap sensible stuff are now long consigned to history, even if the long equipment lists and even longer warranties remain. 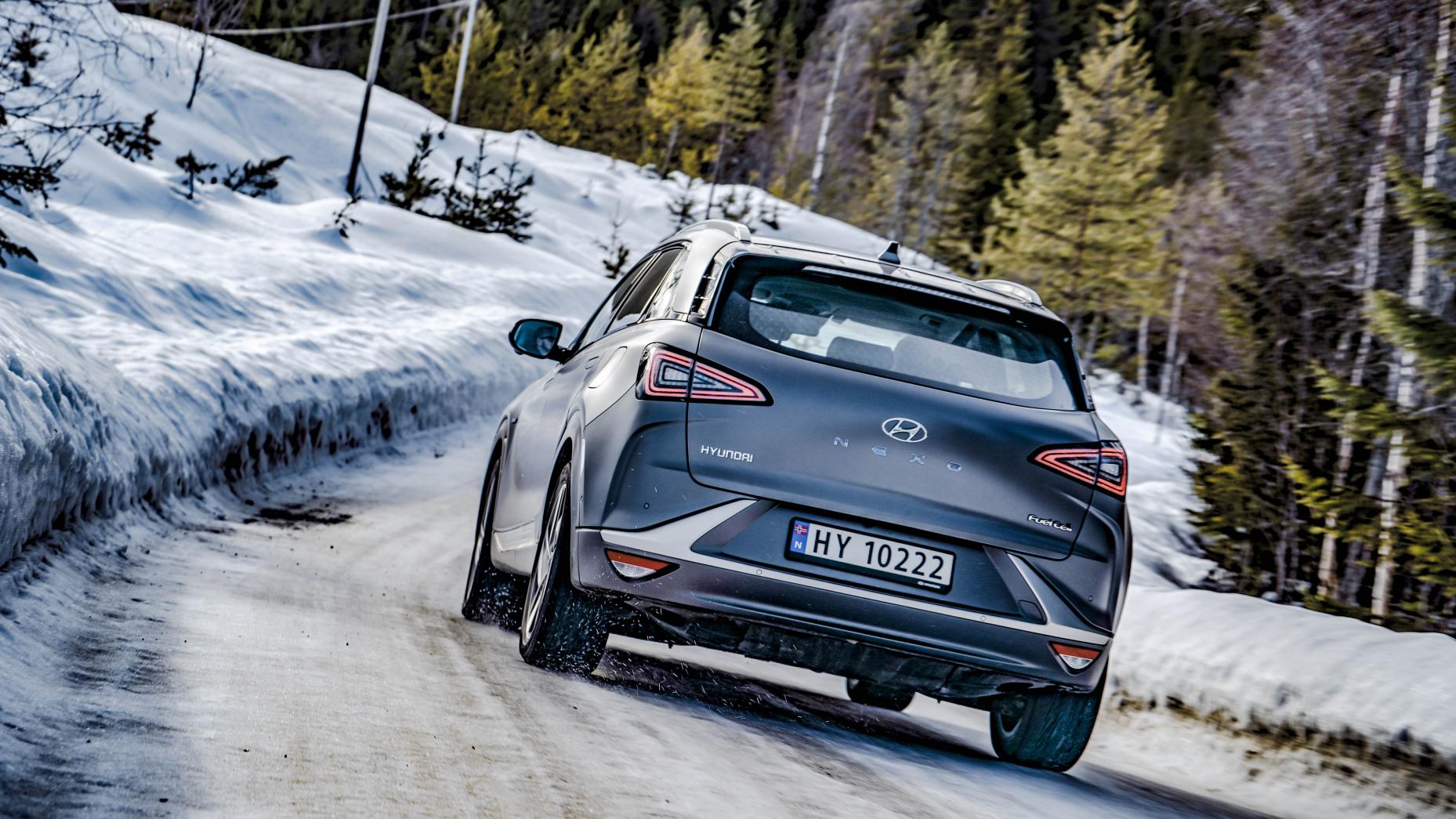 What’s the cheapest car Hyundai builds… and what’s the most expensive it builds?

The latest i10 is probably the cheapest, while the Nexo SUV (pictured), all hydrogen powered and from the future, is the most expensive. That’s the price of being an early adopter.

Expect its N-badged performance car halo to top that, though. It’ll be a unique model - rather than an existing Hyundai with more power, better brakes and a load of red highlighting - and it’s being benchmarked against 911 GT3s if the rumours are to be believed.

It’s certainly spending an awful lot of time circumnavigating the Nürburgring, proving that whatever it costs, a good proportion of its price has already been spent on tyres and those little Nordschleife stickers you pop on your boot after a wobbly Touristenfahrten. 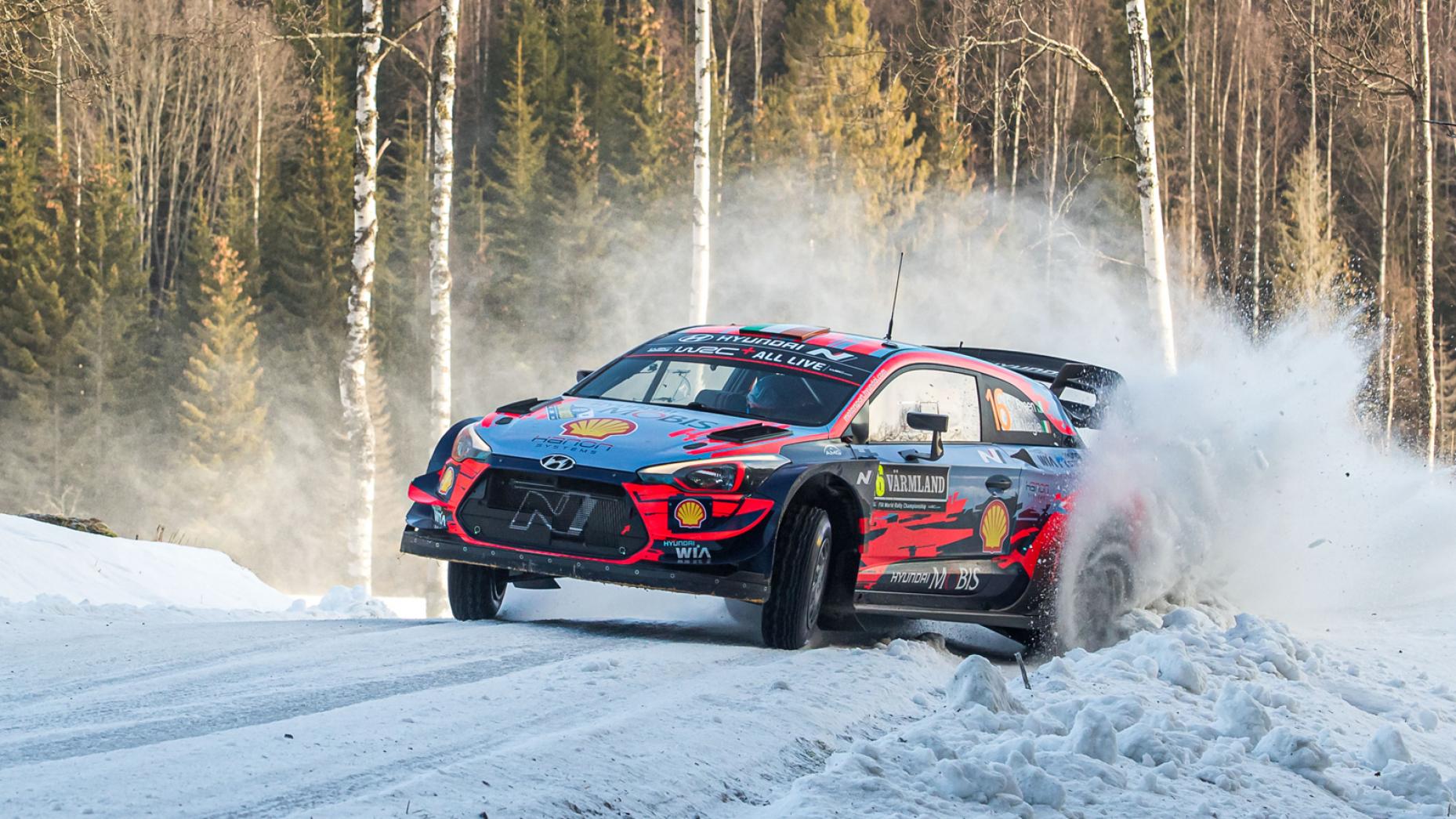 If we’re talking road cars, it’s the V8 powered Genesis sedan sold in the US, with over 400hp and a 0-95km/h time in the low fives. But we don’t want to talk road cars. We want to talk rallying.

Hyundai has a storied past in WRC, with Accents bombing around forests in the early 2000s, but it’s with the latest world rally regulations - and this i20 Coupe WRC - that it’s really come of age. It won the constructors’ title in 2019 and with the flamboyant driving of Thierry Neuville, it’s come achingly close to the drivers’ title in recent years, too.

At the end of 2019, the team nicked reigning world champion Ott Tanak from under Toyota’s nose. Thus they’ll be rather hoping either he or Neuville can finally bring the drivers’ trophy home in 2020. Without a doubt it’s the car you see here. The i30N hot hatch isn’t just the best Hyundai on sale, but one of the best performance cars on sale. Should things like ‘value’ and ‘practicality’ be at all on your radar, anyhow.

Yet it’s about so much more than its endless equipment list and monstrous warranty (which, somewhat improbably, covers trackday use). It’s actually a proper little tearaway, a rawer and more rambunctious thing to drive than the astutely professional Honda Civic Type R.

Perhaps Hyundai’s best moment isn’t actually the launch of this car, though, but something that took place in the lead up to it. We suspect it’s the day the money men had the gumption to call up Albert Biermann - previously a high-flier in BMW’s M Division, making some of the all-time great fast sedan cars - to ask if he wanted to come and fettle some front-wheel-drive Korean hatchbacks.

Quite how many zeroes they added to the end of his BMW salary is by-the-by; snaring him made Hyundai a force to be reckoned with in the fast car market at its very first attempt. 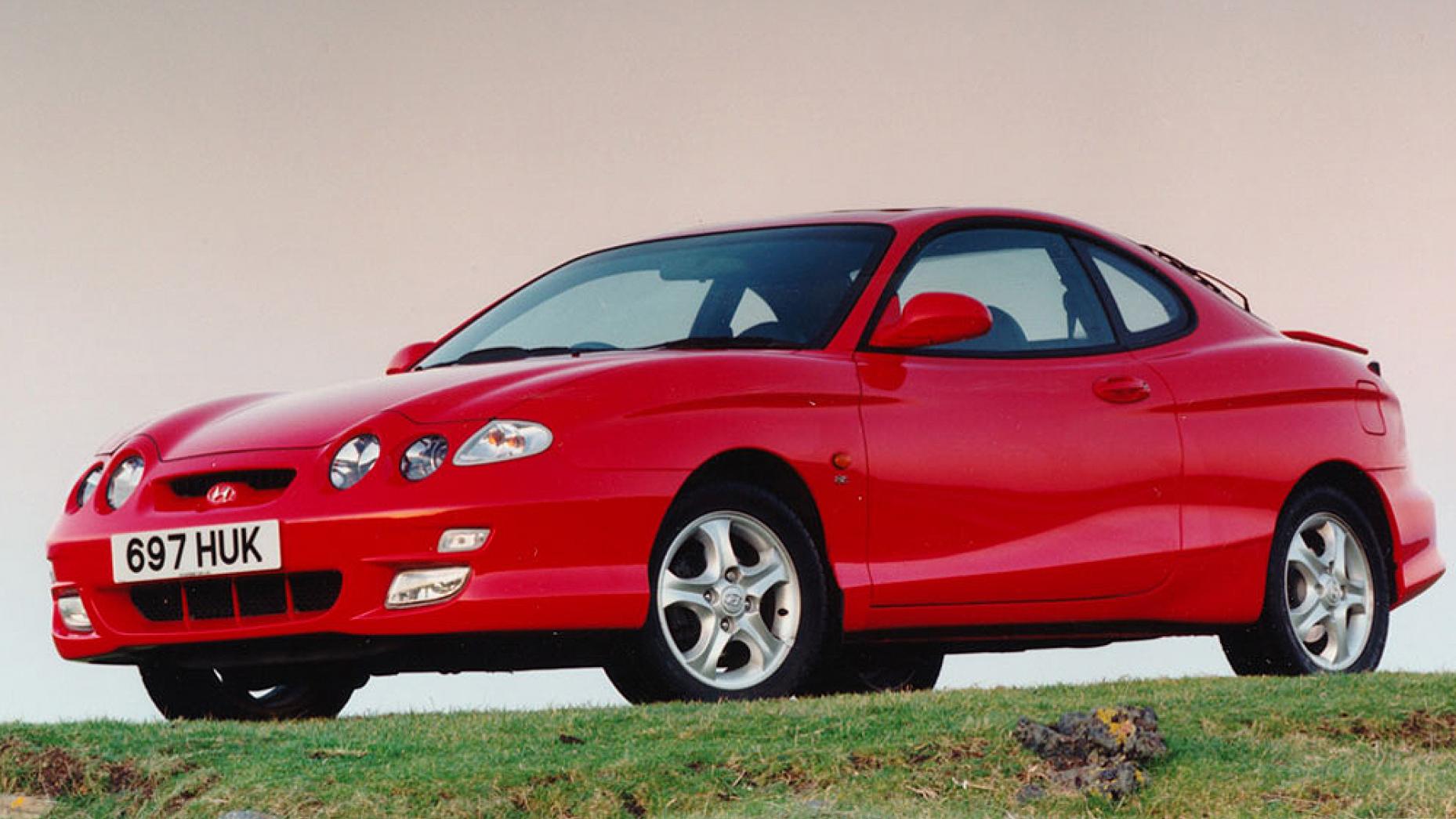 There have been some dodgy moments in Hyundai’s past, most of them simply when it showed a bit of ambition to build cars beyond cut-price white goods that appealed to the ancient.

Moments like the reasonably hideous XG30 sedan, a dimwitted attempt at entering the premium sedan market dominated by BMW and Mercedes whose lessons hadn’t been fully learnt 15 years later when the beyond-unwise Genesis sedan came to the UK.

Left-hand-drive only and wearing a hefty price tag, Hyundai apparently sold 50 of those in two years. Which is about 47 more than we’d expected.

But we can forgive these missteps because at least the company was trying. What we can’t forgive is the facelift of the original Hyundai Coupe. Launched in 1996, the unimaginatively named Coupe was extremely pretty and came with some motorsport-inspired F2 specials, styled with the help of McLaren F1 designer Peter Stevens. For real. It’s the car that made petrolheads sit up and take notice of the weird little value brand tucked away at the bottom of the price lists.

Then, in 1999, it was facelift time. And the car pictured above happened. I distinctly remember seeing it for the first time on old-school TopGear.com via the dial-up bings and bongs of a chunky home PC. And not quite believing what’d happened. In its Korean homeland, the updated coupe was badged the ‘Tiburon Turbulence’. We reckon things were pretty turbulent in the Stevens household that day, too… 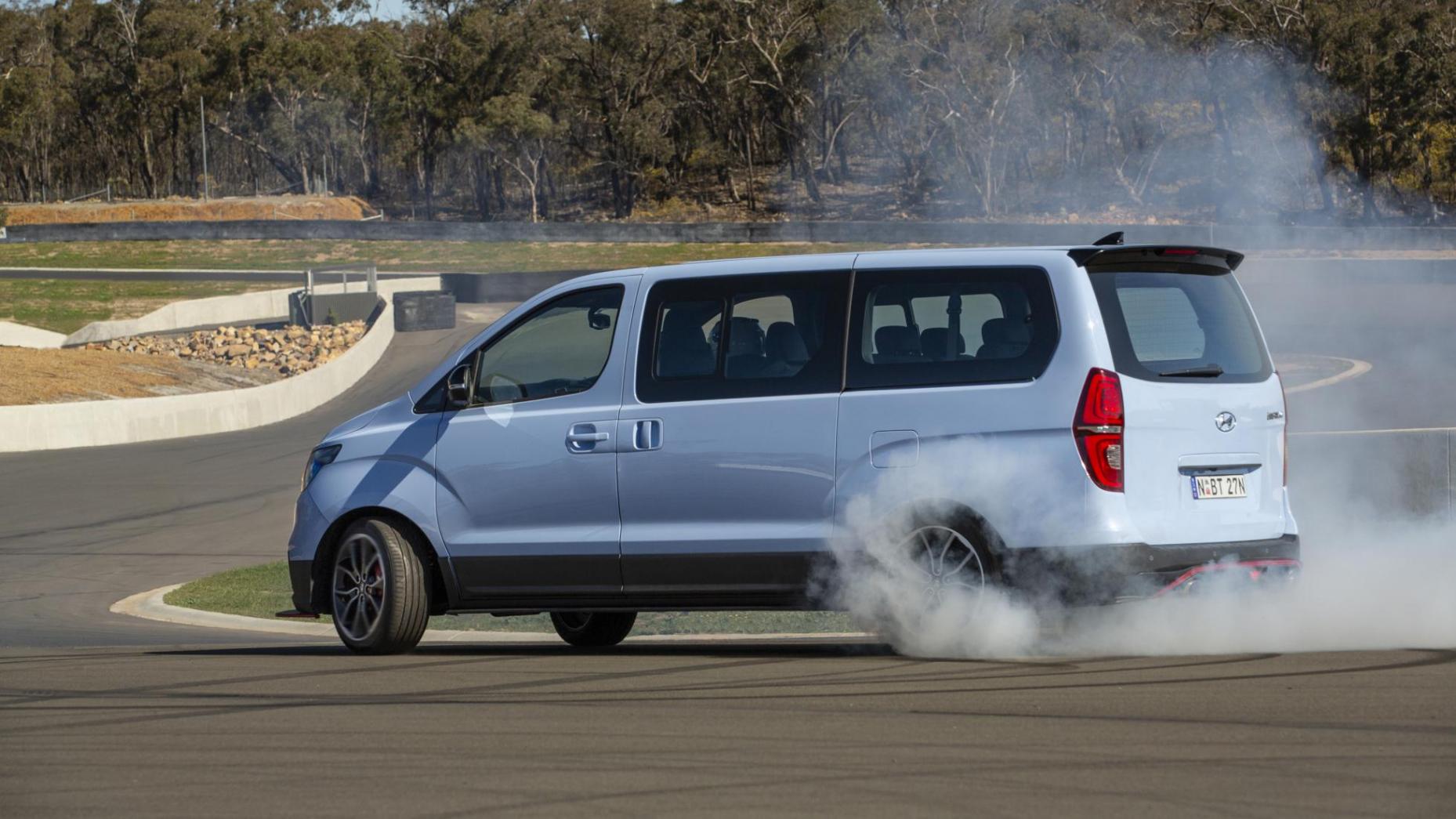 For a company with such sensible brand values, there’s a lot to choose from. The asymmetrically styled Veloster’s arrival a decade ago was a shock to the system, last year’s Veloster monster truck even more so. Then there’s the tie-up with Uber to make 290km/h flying taxis. Yep.

But this potted history of Hyundai would not be complete without reference to THE DRIFT BUS. In 2019, Hyundai Australia took all leave of its senses (in the very best kind of way) and turned an i800 people carrier into a skid-tastic minibus.

With 405hp sent to the rear wheels only - and perfect 50/50 weight distribution if you fill all eight seats - there can be no better way to cart family or friends around. Put it into production, Hyundai, and we’ll forgive you the car on the previous slide. 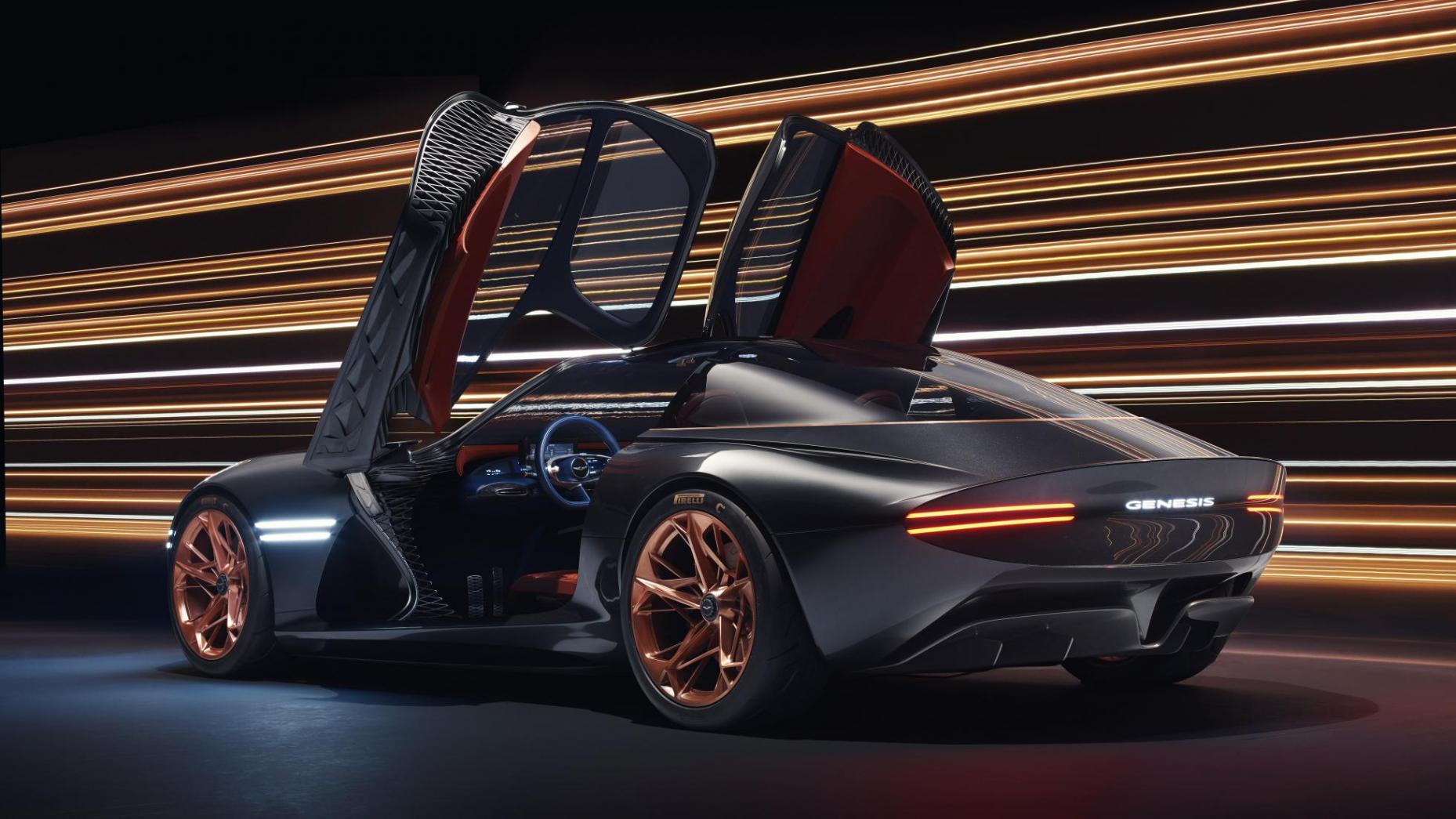 The RN30 which previewed the i30 hot hatch was pretty amazing, even if its 375bhp, four-wheel-drive set-up kinda overpromised on what the 275hp, front-wheel-drive end product would deliver. So we won’t choose that.

Nor will we choose the Hyundai Prophecy, a properly smart electric sedan shown in early 2020. Sure, it’s nicked its lines from a Porsche 911, but there are worse places to take influence from. Imagine if the first Panamera had implemented 911 styling cues with this kind of success…

Nope, we’re giving this accolade to 2019’s Genesis Essentia Concept. Not strictly a Hyundai, but the two brands are as intertwined as Toyota and Lexus or Seat and Cupra. Not least because of that big old Hyundai Genesis we used to get here in the UK.

The Essentia is an infinitely more enticing thing than a depreciation-tastic LHD sedan, though. It’s a fully electric 2+2 sportscar, with the batteries mounted down a central spine rather than under the seats, so you stay low slung.

Carbon’s used for practically everything but the tyres and glass, while the doors scissor upwards. Little surprise when former Lamborghini designer Luc Donckerwolke has been part of the project.

Genesis claims a theoretical 0-95km/h time of 3.0secs, too. Proper supercar speed and a far cry from the docile pace of Hyundai two-doors past. Tell me an interesting fact about Hyundai.

Y’know how Tesla’s basically installed a load of Superchargers, laying out some infrastructure so that people could actually buy and run and its cars? Well Hyundai took that mantra to the extreme decades ago: it constructed South Korea’s first motorway, Highway One. Build people a road, and they can buy your cars to drive upon it.

Then there’s the Hyundai shipyard, with its 63,000 employees, 78 restaurants, company theatre and football team… Hyundai builds 15 per cent of the world’s heavy shipping and 35 per cent of its marine engines. And you thought it was just well screwed together SUVs with ginormous aftercare packages.

Kia and Hyundai have made a very clever gearbox 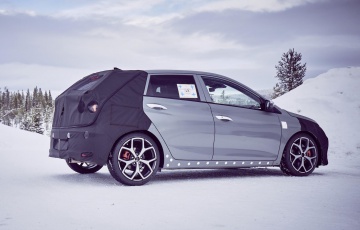 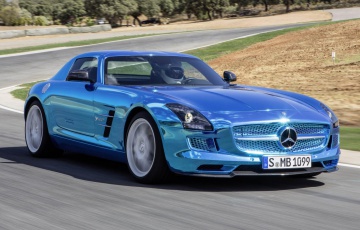 We've come a long way, baby, and these are the cars that broke new ground