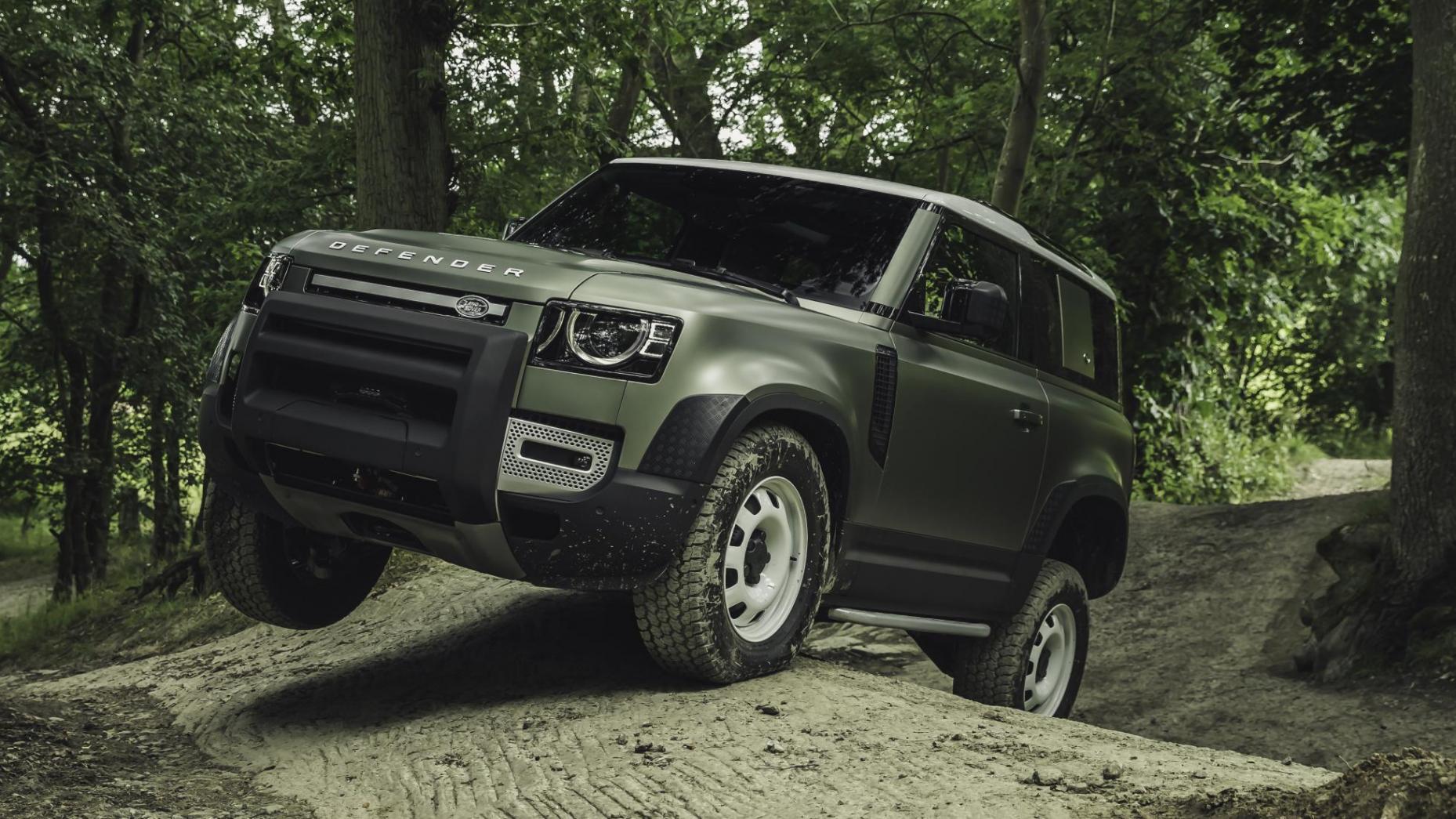 It’s tougher than all the rest

The new Defender is built on an all-new platform, known as D7X (X for EXTREME) which Land Rover claims is three times stronger than any of its closest rivals – the body-on-frame brigade – thanks to the clever combination of aluminium and strategically placed high-strength steel.

The solidity of this platform allows the Defender to withstand a seven-tonne upward load through the suspension – something the team did repeatedly by driving the development cars at a 25cm concrete kerb at 40km/h. Ouchy. 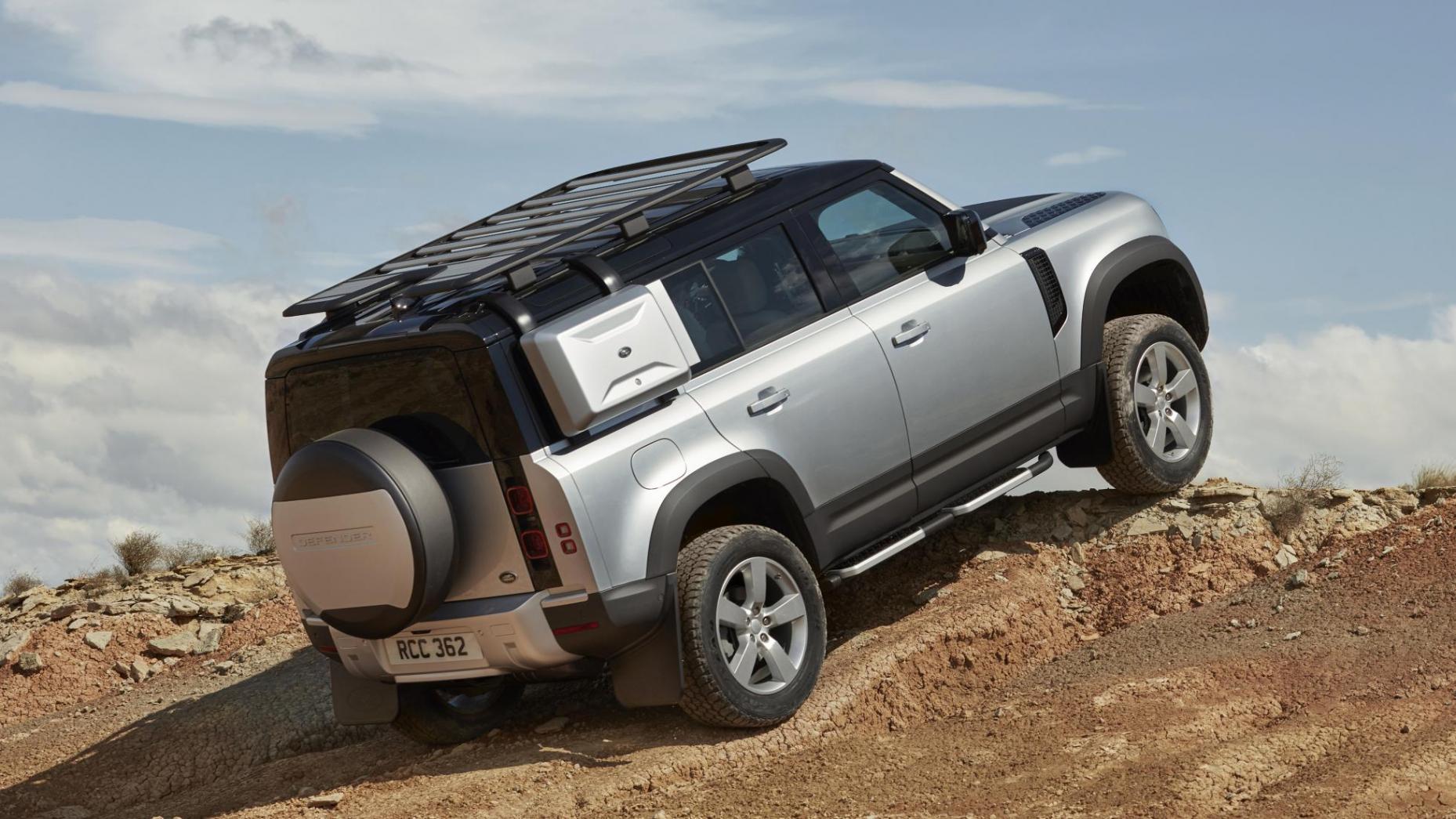 Both the 90 and 110 versions have the same approach and departure angles: 38 degrees front, 40 rear, which enables it to tackle the toughest surface. It can climb a 45-degree angle and descend a 47-degree one.

It’ll also wade through water up to 900mm deep, and the electrics have been tested to IP67 standard, which means they can remain submerged in a metre of water for more than an hour without sustaining damage. 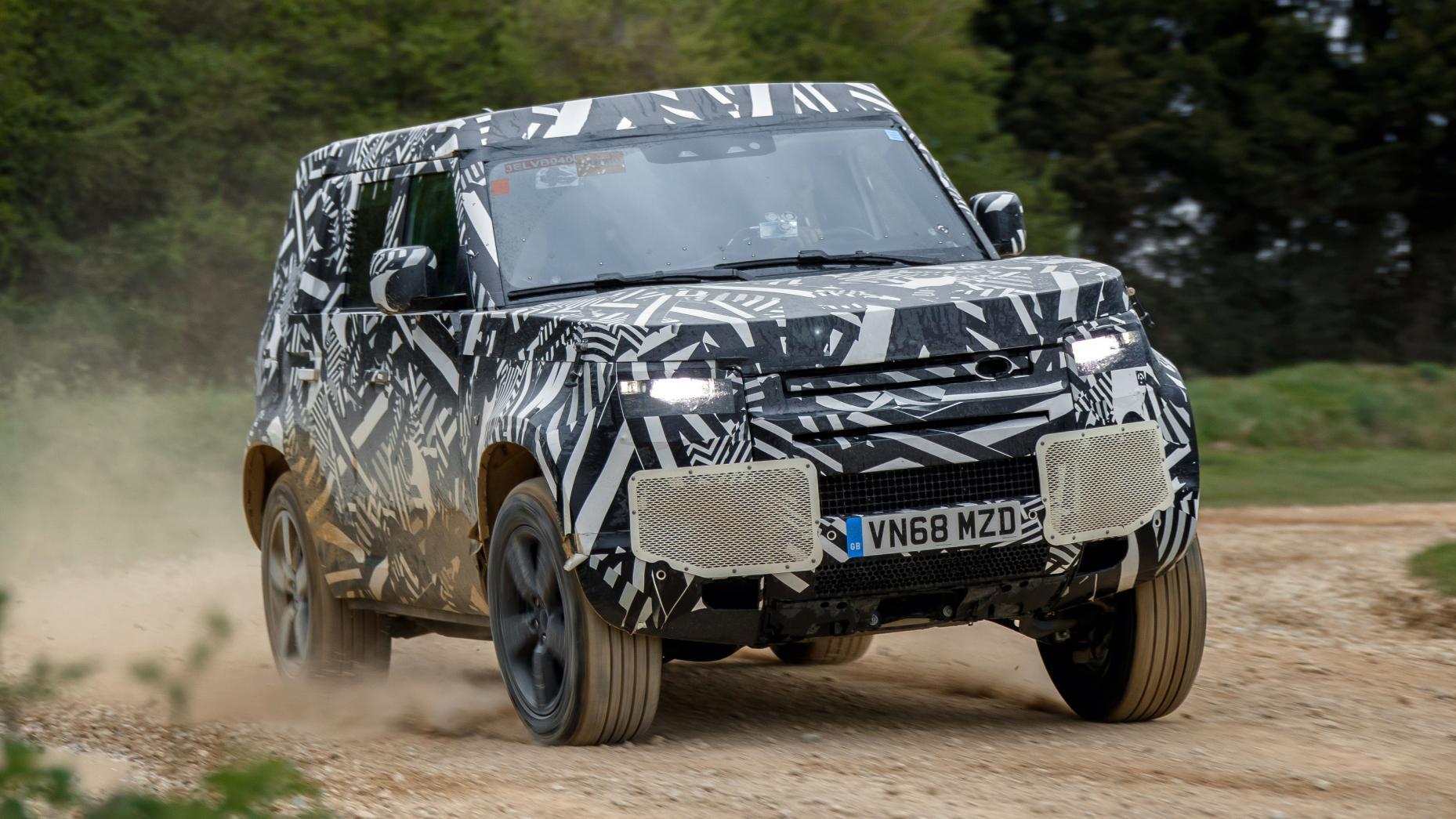 It's been around the world. Quite literally

During its development, the Defender underwent more than 62,000 different vehicle tests and 200,000 separate electrical tests.

By the time it got to its final sign off, the new Defender had covered in excess of 1.9 million kilometres during development. That’s more than 48 times around the circumference of the earth. 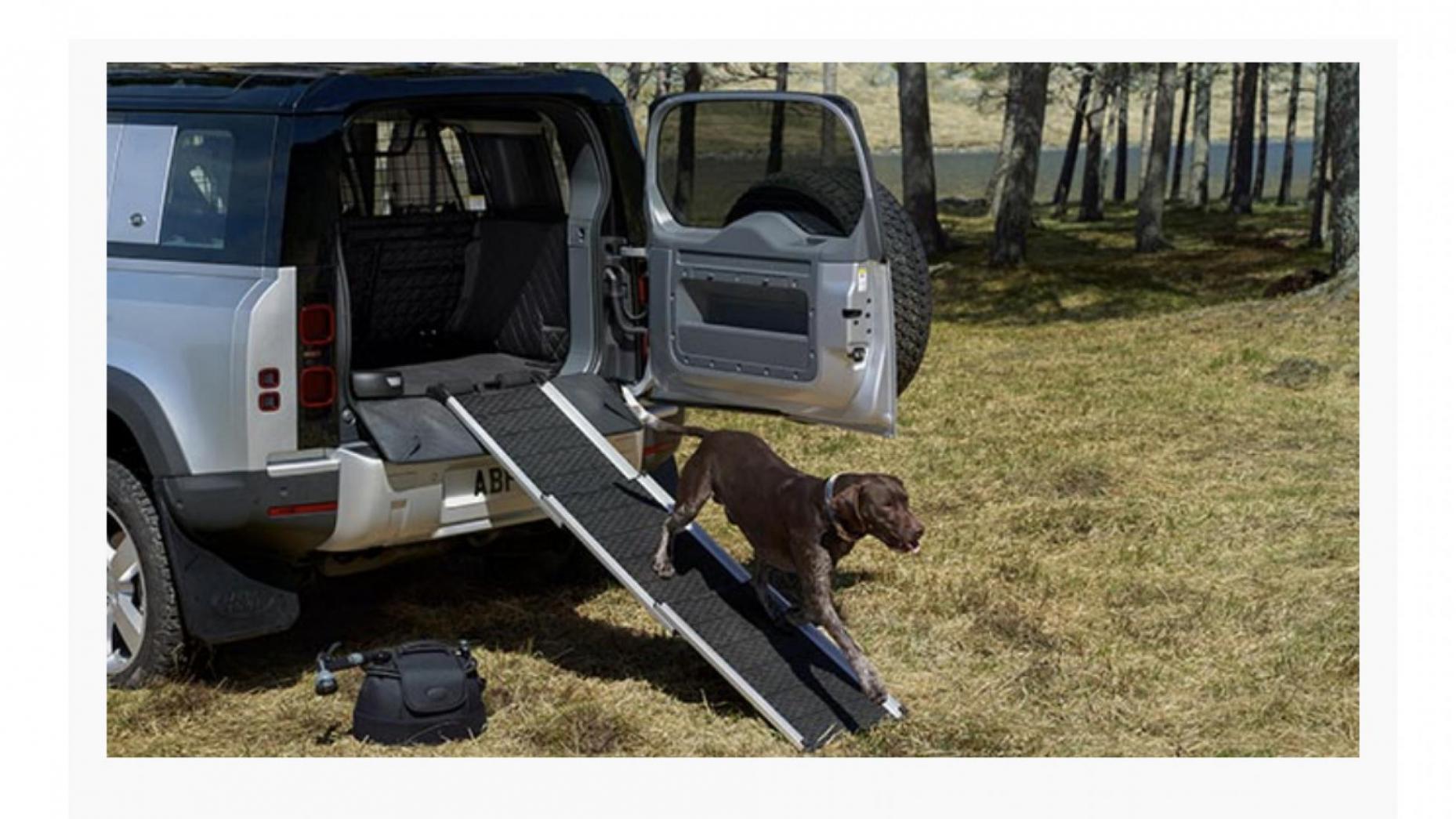 It is very lifestyle

Land Rover, keen to capitalise on the vast accessories market, has developed 170 separate accessories for the new Defender, offering owners everything from roof racks (with ladder), to air compressors and dog boxes. All have been designed to work specifically with the car and your chosen ‘lifestyle’.

The roof rack weighs 36kg, but can carry 168kg of gear on the move without falling over and 300kg while static, which allows owners to avail themselves of the optional roof-mounted two-man tent which, when opened, matches the angle of the windscreen. 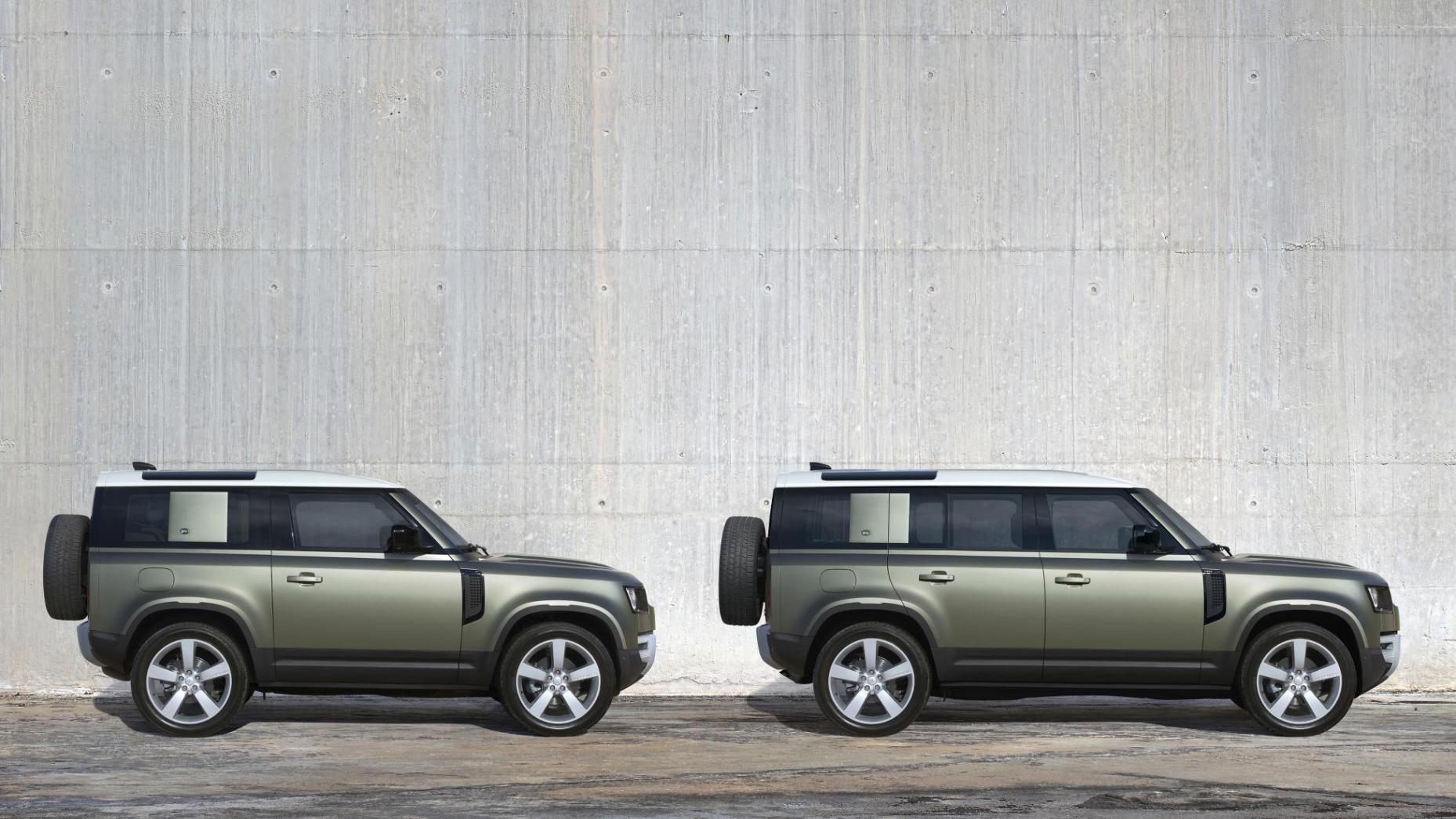 The badges are for show, but there’ll be a longer version yet to come

The Land Rover team admit that they thought long and hard about using the 90 and 110 badging, which originally referred to the approximate length of the wheelbase in inches. Despite the new cars wheelbase being about nine inches longer on the new Defender, the name remains.

What the team don’t admit to is a plan for an even longer iteration, but a leaked document confirms it’s being considered. Don’t let the numbers confuse you, though – in terms of length and width, the Defender 90 is actually as compact as an Audi A3, but with the option of seating for six. Inside, the Defender has gone upmarket while maintaining an industrial feel, thanks to lots of visible materials including a magnesium main dash spar and exposed engineering screw heads.

More luxurious headlines include padded arm rests and the real crowd pleaser of the optional central front seat, which means the next generation can grow up – as many of us did – on adventures between our parents.

But, thanks to the auto gearbox, without the regular inconvenience and occasional shouting involved when your leg is where the next gear also happened to be. 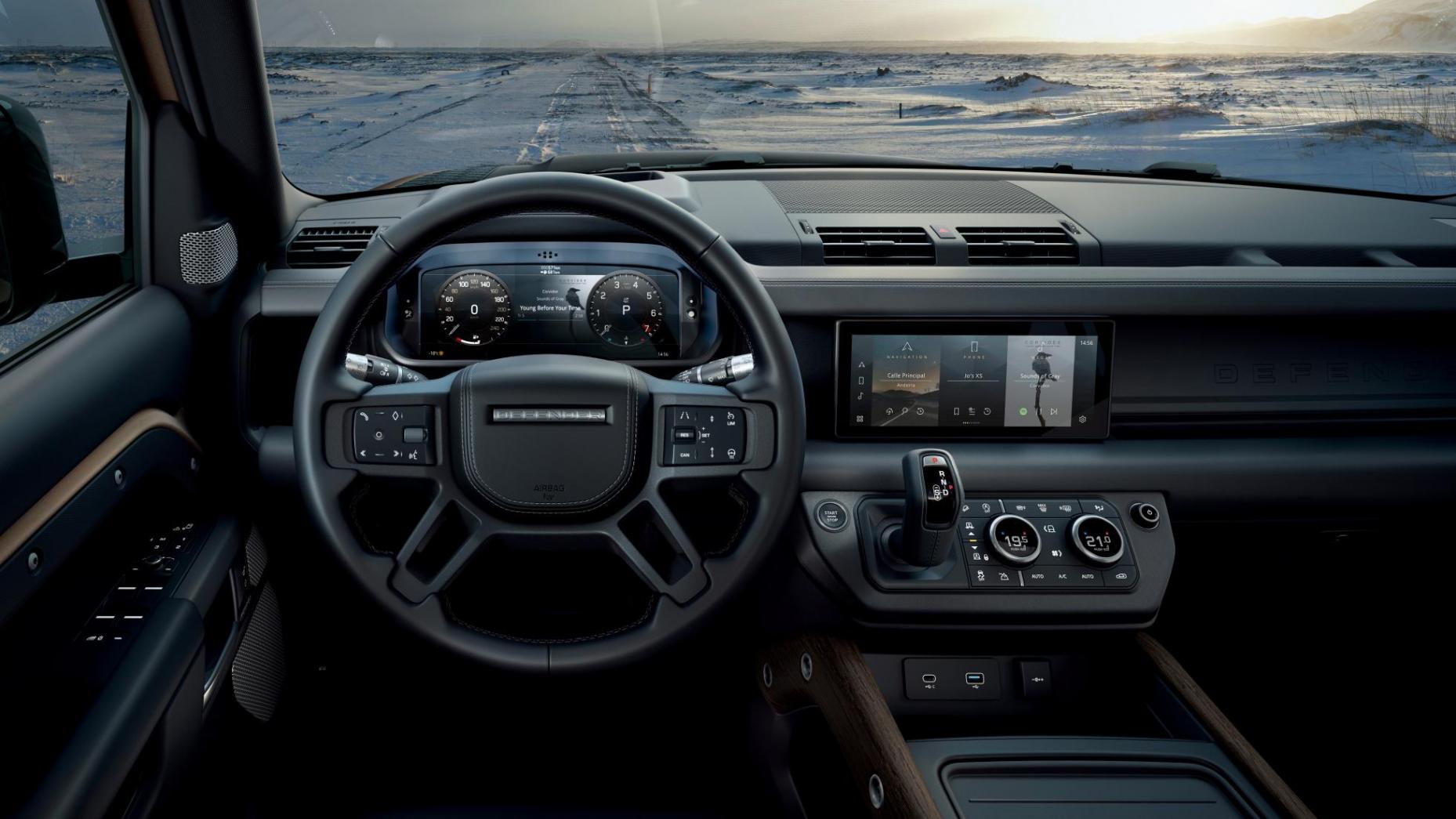 Unlike its predecessor, which was best described as ‘analogue’, the new Defender bristles with tech. Where updating something on the previous model would often require the judicious use of a hammer, the new Defender features over-the-air updates and a roster of tech that would make an MIT alumnus swoon.

At its core is a 100Mb ethernet backbone which, through its dual-banked system, allows new software to be downloaded overnight in the background and activated as soon as you start the vehicle.

Land Rover describes the car as featuring “always connected, always up to date architecture”, which makes a nice change from the ‘always got a flat battery, always smells of dog’ of previous Defenders. But it’s hardly surprising, given the new Defender features 85 ECUs, making the car capable of handling 21,000 network messages at any one time. 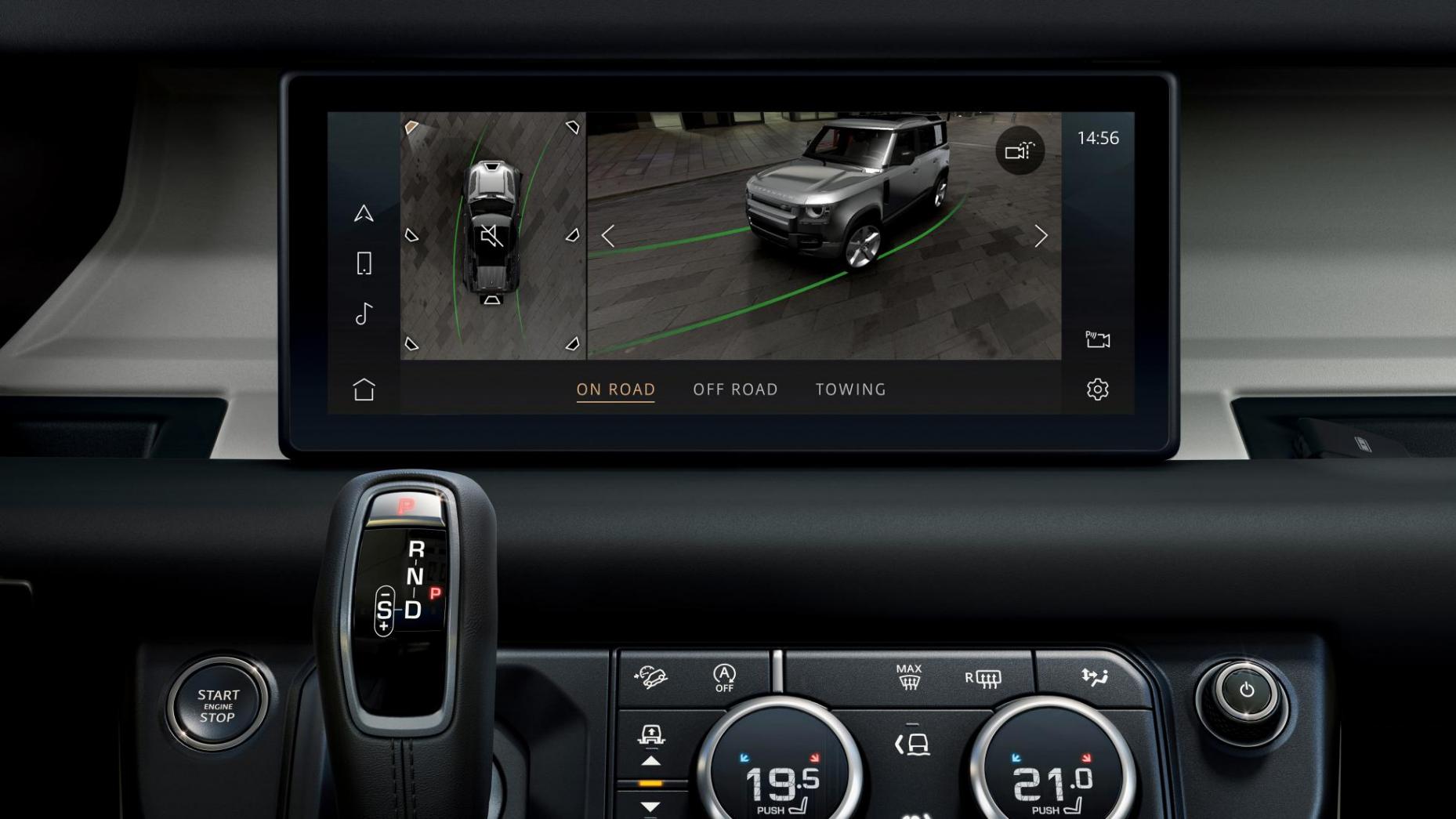 By using a combination of the forward-facing, reversing and side mirror cameras, the Defender can create an accurate image of your entire surroundings. So, that’s parking, reversing a trailer and tight gaps sorted.

The centre display also features a development of the ‘clear view’ technology that allows you to ‘see through’ the bonnet at what the front wheels are dealing with. In your face, G-Class! 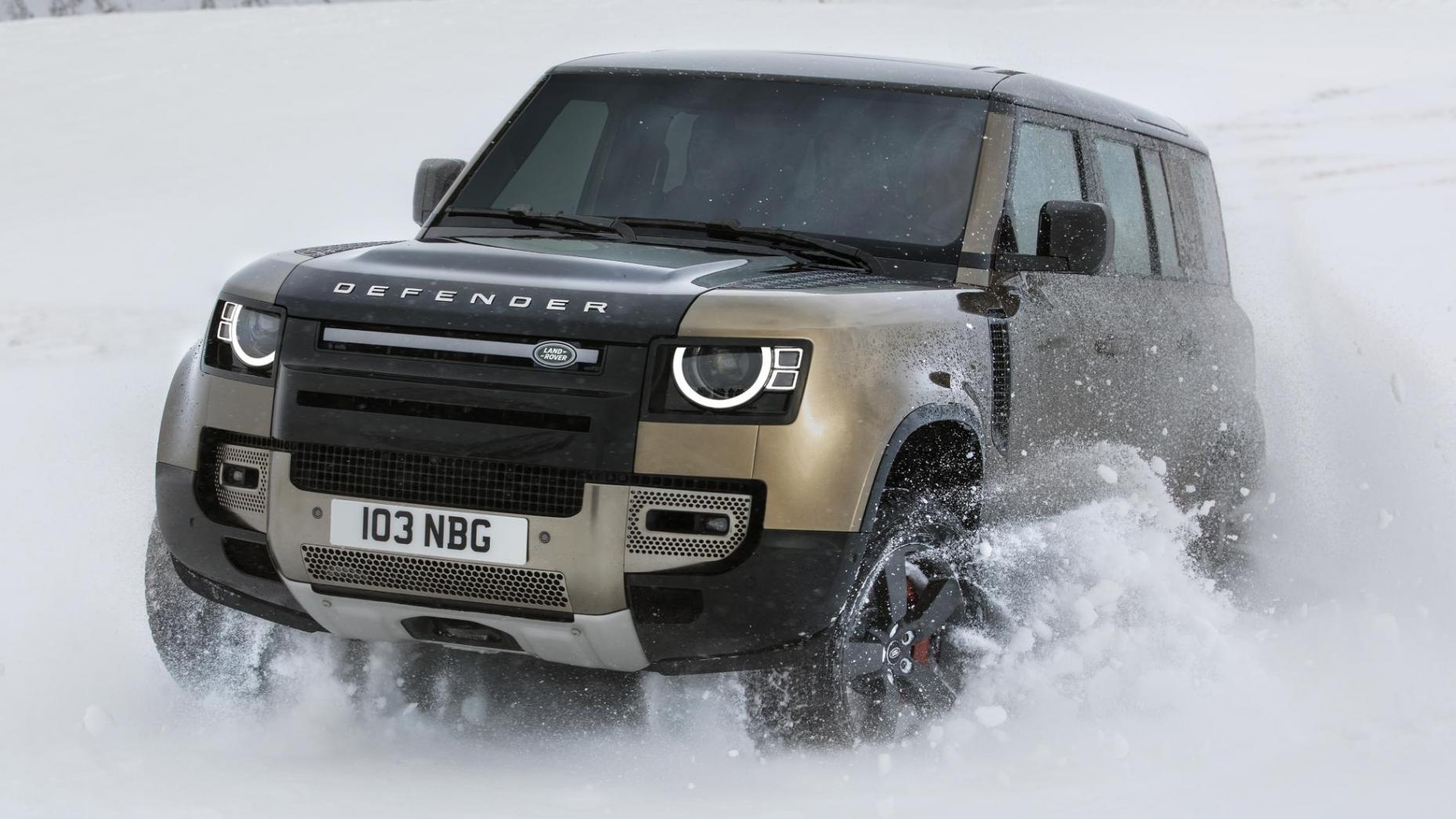 The matt finish of the launch cars is an optional covering that LR developed specifically for the Defender. While it won’t prevent gouges, less severe scratches and scuffs can ‘heal’ as the material heats in the sun and reforms. This surface covering can be replaced in sections during the car’s life. 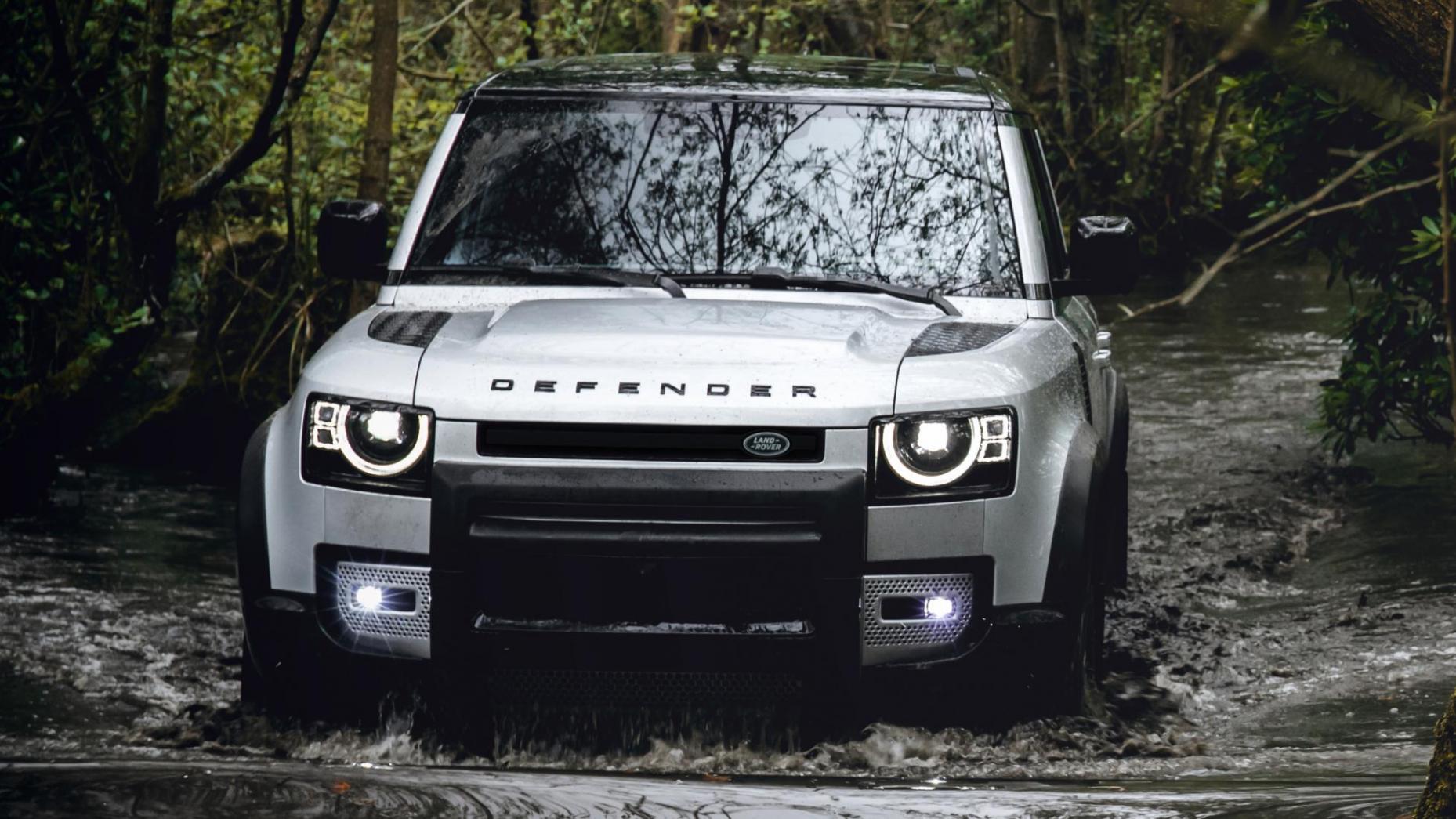 There isn’t a step

Despite its checkerboard look, the two panels on the bonnet are not structural – if you stand on them, you’ll end up putting your foot through the bonnet. Embarrassing. The Defender will come in many different flavours

The first Defenders released into the wild will be 110s, with the 90 coming six months later. The Commercial (steel wheels and blanked rear windows, yes please) will arrive late in 2020.

At launch there will be six models: the base Defender, S, SE, HSE, First Edition and finally the Defender X. Each can be specced with four lifestyle packs: Country, Adventure, Explorer and Urban.

The options list is encyclopaedic and includes two different types of mud flap – shorties and a different longer, “flappier flap”. All models (apart from the Commercial) will come on alloys, with the lovely steel wheels available as an option, in what seems like a cunning piece of reverse psychology. 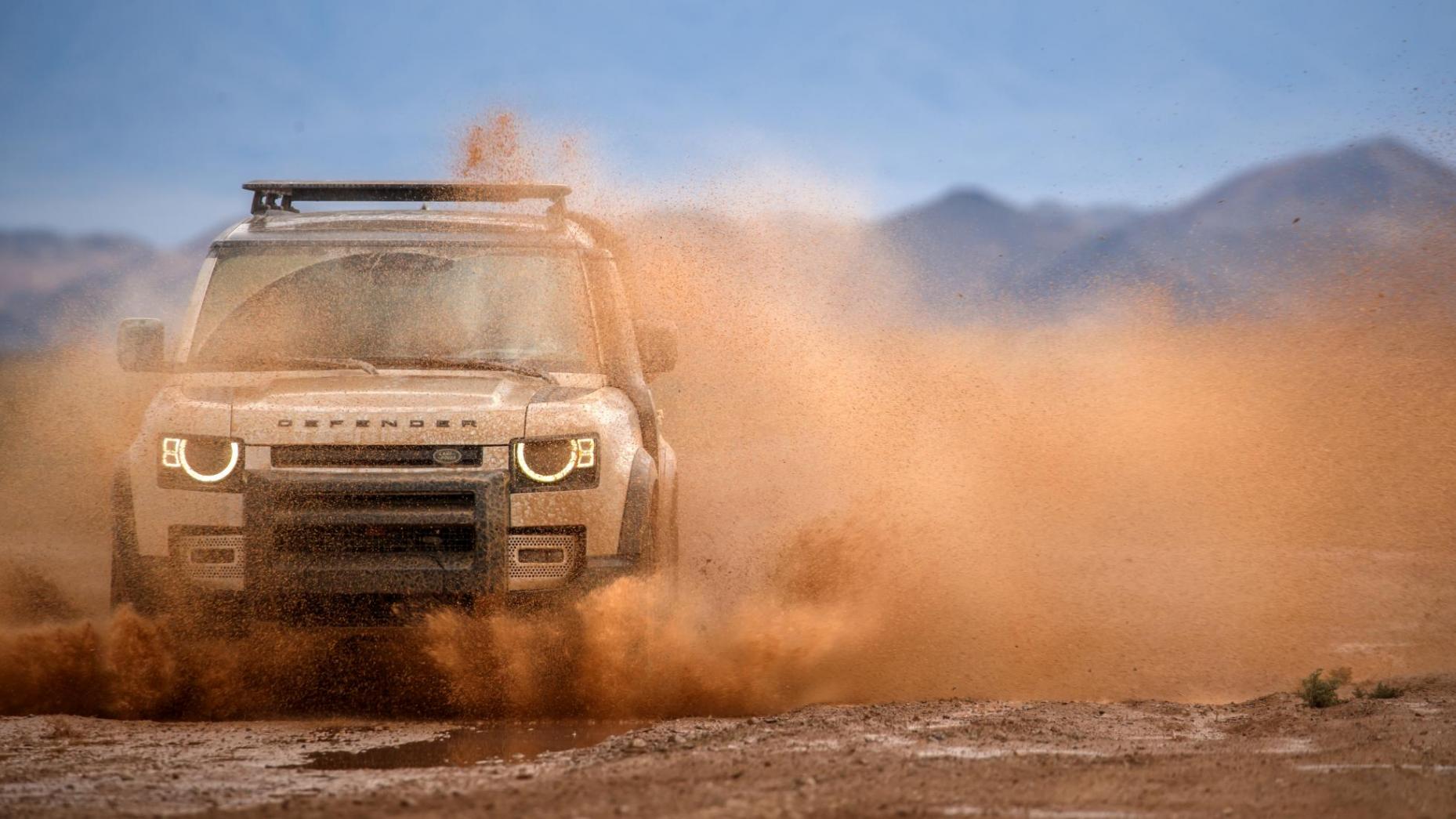 There are engines but most importantly a V8 fits inside, too

At launch, the Defender comes with four engines: two 2.0-litre four-cylinder diesels, a 2.0 petrol and a 3.0-litre, six-cylinder petrol, the latter featuring 48-volt mild hybridisation to deliver about 400hp. All are combined with an 8spd ZF auto gearbox and dual-range 4x4.

While not confirmed, the JLR V8 is said to fit beneath the Defender’s bonnet. And, given the last hurrah for the Defender was the frankly terrifying Works V8, optimists among us can dream about a V8 in the future. The Defender’s optional winch, hidden behind the front grille, can handle a maximum weight of 4,536kg and pull from a distance of 45 metres. Each of the snatch points on the car are capable of handling six tonnes of force – something you can exert through the optional Musto belt, which can handle the same load.

But given the lengths of engineering the team at Land Rover went to in development, getting stuck doesn’t seem like something you’ll be doing very often… Land Rover Defender 90 review: the Defender to have?

Is the best new Defender a short-wheelbase version? Straight-six and base spec tested. Need to deliver big things to remote places? Let the new Defender sort you out How to spec the new Land Rover Defender for an expedition

Which dark corners of the Land Rover Defender's options list must one plunder to survive three days off-road?